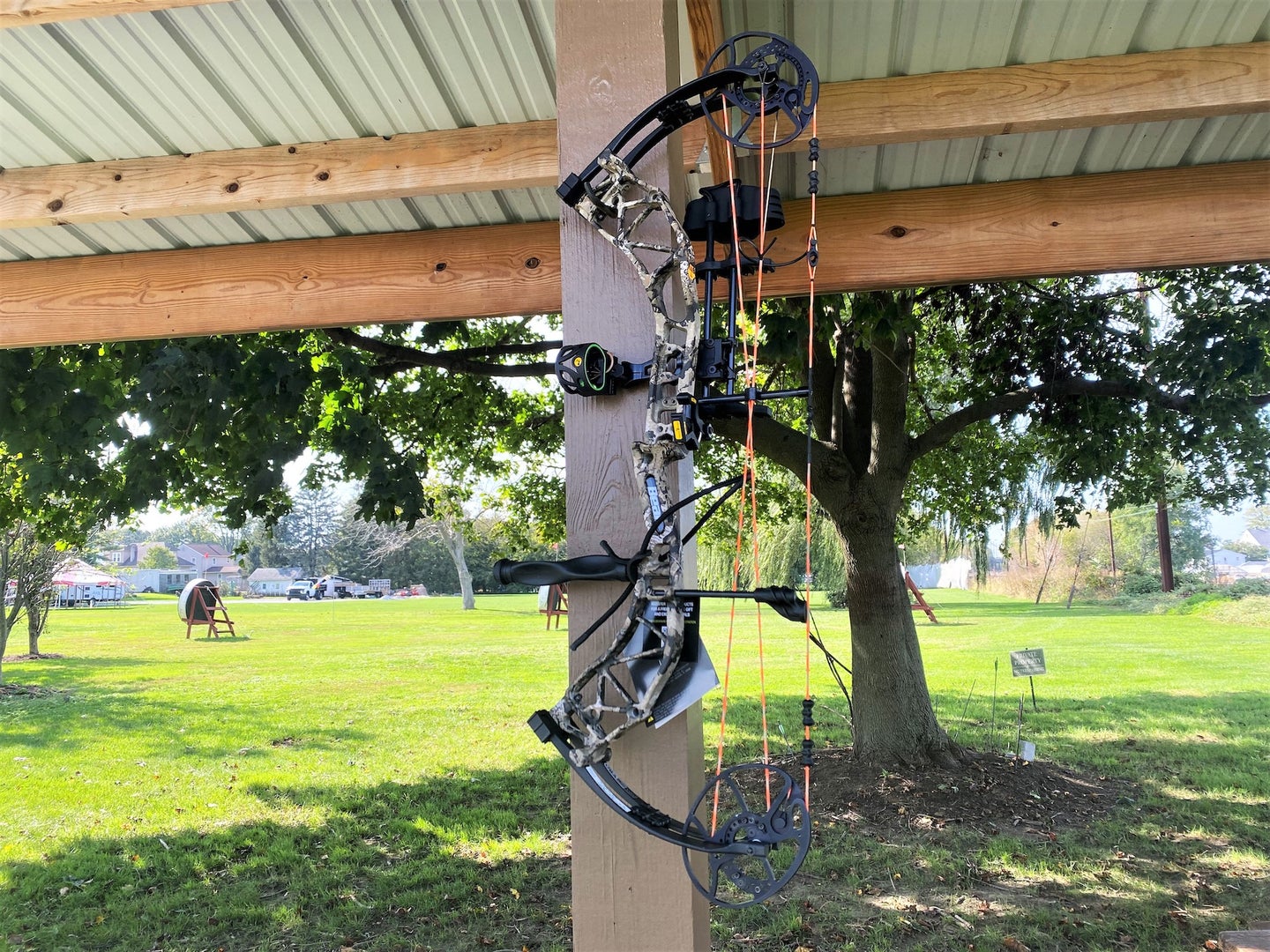 With its 2022 lineup of bows, Bear Archery has an option for every category of customer. They’ve got a flagship bow, a mid-range bow, and a budget bow. The Bear Resurgence is their mid-range offering, and for what it’s designed to do and who it’s designed for, it just might be the best of the three options. It’s fairly quick, nice to shoot, and it comes with almost everything you need to start hunting.

I know what you’re thinking: “Man, those package bows always have cheap accessories.”

That’s not the case with the Bear Resurgence. Bear is part of the same company that owns Trophy Ridge, which produces some excellent, budget-friendly accessories. And while the bow is a great mid-range option by itself, the accessories make it a real winner.

The Bear Resurgence is a 32-inch long aluminum bow that weighs 3.9 pounds without any accessories. It has a 6.25-inch brace height—which is on the aggressive side—that helps the bow attain an IBO speed rating of 335 feet per second.

I’ve stated several times in bow reviews that I don’t put much stock in IBO speed ratings for compound bows, because I have never been able to reproduce the rated speed for any compound bow I’ve tested. They always come in slower. And that’s fine with me. I’m not a speed freak. I will take accuracy over speed every day.

The Resurgence employs a rotating module for adjusting draw lengths from 25.5 to 31 inches. For the general consumer, I like the rotating modules. They allow the owner to adjust the bow for different users, if you want to share it with friends, and they allow for a wider audience if you ever want to sell it.

There are two draw weight options: 45 to 60 pounds or 55 to 70 pounds, both with 80-percent let off. We don’t see the 15-pound draw weight range much in compound bows. Ten pounds is more common. The 15-pound range offers more room for growth, if you want to start off light and build up to the maximum weight.

A binary cam system uses two identical cams that are slaved to each other. That means they work in unison. Once you get the timing right, the cams rotate exactly the same. So they pay out and take-up string at the exact same rate, which means the arrow comes straight back on the draw and goes straight forward on the release.

You can imagine the tuning issues that can be caused and the efficiency lost when the arrow doesn’t go straight back and straight forward. When there is some vertical nock travel, the bow definitely loses energy, and it can be tricky to tune. With a binary cam—that is timed correctly—vertical nock travel isn’t an issue.

Read Next: Parts of a Compound Bow: What You Need to Know Before Buying Your First Hunting Bow

As previously mentioned, the Bear Resurgence comes equipped with a full kit of Trophy Ridge accessories. You get a Trophy Ridge Joker four-pin sight, Whisker Biscuit V arrow rest, a Blitz stabilizer, wrist sling, five-arrow quiver, peep sight, and D-loop. All you need to hunt are arrows and a mechanical release.

Let’s be honest, these are not high-end accessories. But they aren’t junk either. They’re solid accessories that do what they’re supposed to, and can withstand a fair amount of abuse. The Whisker Biscuit arrow rest is arguably one of the most popular hunting rests sold today. This is the new V version of that rest, which features a V-shaped hole in the bristles instead of a circle. The V rest allows you to shoot arrows of varying diameter from one rest, unlike the circle rests, which require different sized biscuits as you change arrow diameter.

The Joker sight was surprisingly effective. I was expecting the pins to be dull at full draw outside, but they weren’t. They were nice and bright.

I’d describe the other accessories—peep, stabilizer, sling and quiver—as functional. You can get better gear, but it’s not necessary.

I borrowed a brand new Resurgence from Lancaster Archery Supply for my testing. It was a 45 to 60-pound bow, set at 60 pounds, with a 29.5-inch draw length. The bow came with the rest, D loop and peep sight installed. That makes at-home setup a snap.

The D loop was centered perfectly on the string. All I had to do was nock an arrow, put it on the rest, and then pivot the rest until the arrow was level from string to riser. Then I locked the rest bolt in place and made my left-right adjustments to center the arrow via the windage block. The peep sight was installed, but it was possible to slide it up and down the string. I moved it up a bit to position it for me, and then tied it in place so it wouldn’t move. The sight, quiver and stabilizer installation simply required screwing some bolts into the designated holes. Assembling the bow was just that simple.

Now, I wish I could say that was the end and that anyone can set up this bow at home without the need for any special tools. And it’s possible you can. But as I mentioned earlier, one of the keys to getting a binary cam system to function properly is to make sure the cams are synchronized. If they aren’t, you’ll need a bow press.

On my bow, the bottom cam reached full draw just a bit faster than the top cam. The fix was simple, but I needed a bow press to do it. I pressed the bow, put a couple of twists in the cable attached to the bottom cam, and the timing was perfect. Without the bow press, though, I couldn’t have made that fix. (On a whim, I checked another Bear Resurgence the shop had in stock, and the cams on that bow were perfectly timed. So it’s not a given you’ll need to adjust cam timing.)

As for shooting the Resurgence, this is where the bow shined. Those binary cams made tuning the bow a snap. All I had to do was tweak the rest a bit to get a perfect bullet hole while paper tuning.

At 60 pounds and 29.5-inches of draw length, I shot a Black Eagle Spartan arrow weighing 477 grains at 263 fps through Lancaster Archery’s chronograph. That’s plenty of speed for a fairly heavy hunting arrow.

On the range, I would say the Resurgence offers a nice shooting experience. The draw cycle is nice. You expend a fair amount of effort in the beginning, ease that effort through the middle of the cycle, then increase the exertion just a tick to get the cams to roll over, and then settle into a comfortable back wall.

At the shot, the bow produces a thump with some vibration, but it’s minimal. This is not a bow that wants to leap out of your hand or send shock waves to your elbow. (Yes, there are bows that do that.)

The accuracy was decent. Bowhunters often talk about only needing to produce arrow groupings that can fit inside an 8-inch pie plate in order to attain killing proficiency. At 20 and 30 yards, I could do much better than that. At 40 and 50, I held a 4-inch group with this bow, as it comes in the box.

I believe I could have done better with a drop-away rest, a different stabilizer setup and a better sight. But as set up with the accessories provided, the Bear Resurgence performed adequately. I would feel confident carrying this bow into the woods.

Where the Bow Is Lacking

The bow causes a lot of pin float because it’s so light—3.9 pounds bare—it doesn’t hold very still at full draw. The sight pin wanders. There are ultralight bows that hold well without adding a ton of weight. This just isn’t one of them. It benefits greatly from a good stabilizer setup.

I’m torn about knocking them for this one. Anyone can adjust everything about this bow and set up at home—except for timing the cams. You need a bow press for that if your cams aren’t timed properly—and that’s a piece of equipment many just don’t have. But that’s a casualty of having binary cams, which I will get to in a second.

Where the Bear Resurgence Excels

The binary cam system. This is a powerful, well-designed engine for any compound bow, let alone one that’s budget friendly. And speaking of cost, the mid-range price for this bow makes it a solid choice for bowhunters of all levels. The fact that you get decent accessories with it for that price, makes it an even better choice.

Read Next: The Best Compound Bows for the Money

Prices for archery gear have been on an upward spiral for a couple of years. With the Resurgence, Bear Archery is making sure that casual bowhunters have options for equipment that’s reliable and high-performing without the flagship price tag. Keeping archery and bowhunting from becoming endeavors that only the rich and/or diehards can afford will always get kudos in my book.