How To Choose The Best Shotgun Barrel Length

Expert advice on weighing a barrel’s balance, swing, and handling. 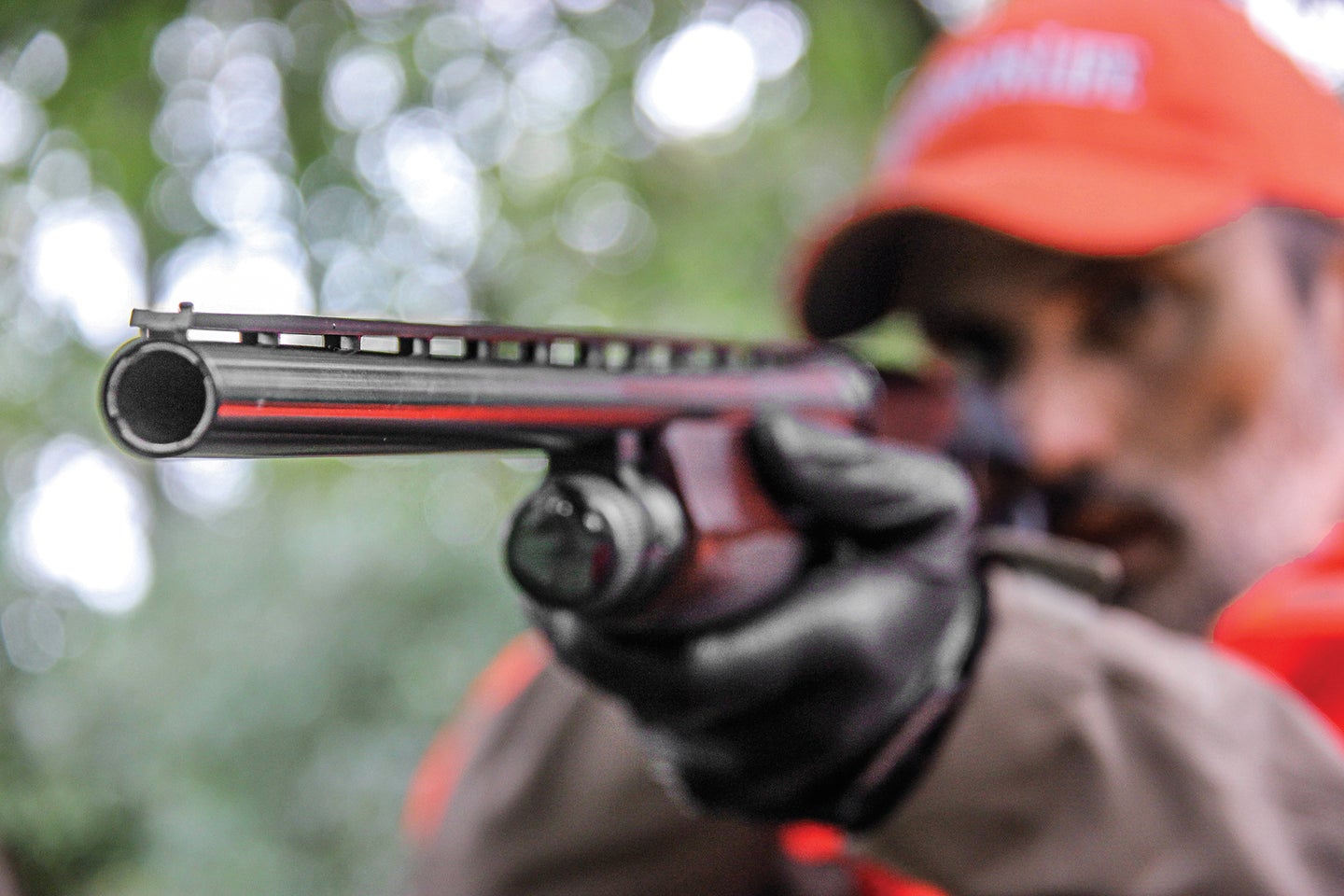 How do you choose the best barrel length?. Brad Fitzpatrick
SHARE

If you’re into starting ugly debates online, go to a shotgun forum and ask which barrel length is best. Of all the contentious topics in the world of firearms, this elicits some of the most ferocious and deeply divided responses. It seems like choosing the right barrel length for your shotgun should be pretty basic—far simpler than, say, the nuanced sciences of choke selection or the proper shot size for hunting game. But the barrel battle still wages. So, what’s the verdict?

First, let’s outline the parameters of the shotguns in question. Let’s leave out the really short self-defense and law enforcement barrels. We’ll also avoid the other end of the spectrum: the 32- and 34-inch barrels worn by some competition guns. So if you’re looking for a field gun that doubles as a clay crusher in the summer, just how much pipe do you need?

It seems that there’s some sorcery to finding a gun with great balance, the shotgun-barrel combo that is the perfect weapon in your seek-and-destroy mission against 108mm clay targets. But the mythology surrounding shotgun handling is largely that—more a result of the shooter’s perception than actual measurable qualities of the gun itself.

“People commenting on ‘swing’ will most certainly provide gibberish for answers, as swing is about feel,” says Dave Miles, director of marketing at Mossberg. “Simply put: Longer, heavier barrels will swing smoother, while shorter, lighter barrels will be more maneuverable but will not offer the same ‘swing,’ or momentum, that a heavier barrel has.”

“Swing is controlled by the center of gravity of the shotgun and is a feel rather than a scientific entity,” says Mossberg senior design engineer Tim Blazek. “Swing is affected by the combination of barrel length, barrel contour, choke style (extended or flush), receiver material, action type, stock and forearm density, rib style, and more.”

There are some measurable facts in regard to balance and handling, though. The same gun, with a longer barrel, will have more weight at the muzzle. This, in turn, changes the balance point, moving it farther ahead of the action. That weight-forward bias smooths the swing.

My personal experience is that long-barreled guns handle far better for me, though part of that might have to do with my arm length and hand position on the stock. I have relatively long arms and grip the gun farther down the forearm than some other shooters, and I find that I shoot a 30-inch over/under better than a 28-inch stackbarrel, all other things being equal. When I intentionally place my hand closer to the action, the feel of the gun changes.

My experiences are also scenario-specific. When hunting doves, I find that my percentages typically go up on hard-flying birds in proportion to barrel length. But there are other instances—­hunting grouse and rabbits in thick cover comes to mind—when that extra barrel length is nothing but a hindrance, since shots will be quick and bushes and grapevines make toting a 30-inch gun a real chore. For dense cover and snap shooting, portability outweighs balance. It’s also important to bear in mind that an over/under or side-by-side will have a shorter overall length than a pump or semi-auto with the same-length barrel; a semi-auto with a 26-inch barrel will almost invariably be longer than a double with 28-inch tubes.

Rifle and pistol shooters are affected by the length of sight radius, and that term has bled over into discussions regarding shotgun barrel length. But bear in mind that “sighting” a shotgun is very different from sighting a rifle or pistol in that your focus is on moving targets, and you are simply using the bead as a reference point for your muzzle.

Velocity is more easily analyzed than balance and swing since it can be measured with a chronograph. According to Blazek, with barrels measuring 20 to 32 inches—which covers the gamut of game guns— there’s a gain of about 10 feet per second per 2 inches of barrel length for standard loads, and roughly 15 fps per 2 inches for magnum loads. So the difference between a 20-inch and a 32-inch barrel will be 60 feet per second with light target loads—hardly a significant difference.

But I wanted to test these theoretical values, so I rounded up 20- and 12-gauge guns with barrel lengths measuring from 24 to 28 inches. The loads used were the same for each gun (Winchester AA Super Sport for the 12-gauge guns, Baschieri & Pellagri Dove & Quail loads for the 20s), and all of the barrels tested had Improved Cylinder chokes installed for consistency. Velocities were measured with the muzzle 12 inches from the chronograph, and the results are shown in the accompanying chart.

As you can see, the velocities didn’t change much with respect to barrel length. So when you’re purchasing a new shotgun, my advice is to go with whatever barrel length feels best for the type of shooting you’re going to do.

Barrel Length: The Long and Short of It

Barrel length may not have a major impact on shotgun muzzle velocity, but it does affect handling. If you’re hunting in thick cover and you’re shooting stationary targets (such as turkeys) then a short barrel offers many advantages. You won’t have to worry about the gun hanging-up on low-hanging branches, and the barrel is easier to maneuver when setting up behind a screen of brush or limbs. In certain upland hunting situations you’ll also benefit from having a short barrel, specifically when hunting grouse and woodcock in dense cover. I spent a miserable afternoon in Maine chasing grouse with a side-by-side 12-gauge sporting 30-inch barrels. The gun was worse than useless in that jungle of alders, and when I eventually switched to a Browning BPS Upland with a 22-inch barrel I fared far better. Shotguns with short barrels are the norm for home defense situations, and I’d choose a gun with a similarly short barrel for following up wounded game like bears in thick cover.

On the opposite end of the spectrum you have target guns designed for clay games. Trap, skeet, and sporting clays guns traditionally have barrels from 28 to 34-inches, and longer barrels are less of a burden since there’s little walking required shooting skeet or trap events. But according to Don Currie, the National Sporting Clays Association’s chief instructor, added barrel length isn’t always a good thing.

“With all other factors being equal (shell, load, etc.), there is no appreciable advantage in shooting a shotgun with a 34-inch or 32-inch barrel length over one with a 30-inch barrel,” Currie says on the NSCA website. “For a sporting clays shooter, the proportionality and balance of your shotgun should be your primary criteria for determining barrel length. A shotgun that is properly balanced puts the center of gravity of the gun between your hands so you are able to move the shotgun naturally and efficiently to the target with less physical effort.”

Currie advises basing your barrel length choice on how well the gun balances with your length of pull. Someone who has very long arms and shoots a shotgun with a long length of pull (say, 14 ¾-inches or more) may find that a gun with 32-inch pipes provides proper between-the-hands balance. Shooters with a standard length of pull will likely find that a 30-inch gun is optimal, while reduced-length stocks may balance best with a 28-inch barrel.

For most field applications guns with a 26 or 28-inch barrel work well because they offer improved maneuverability and less weight yet they provide a neutral balance point that allows you to swing the gun comfortably and efficiently.