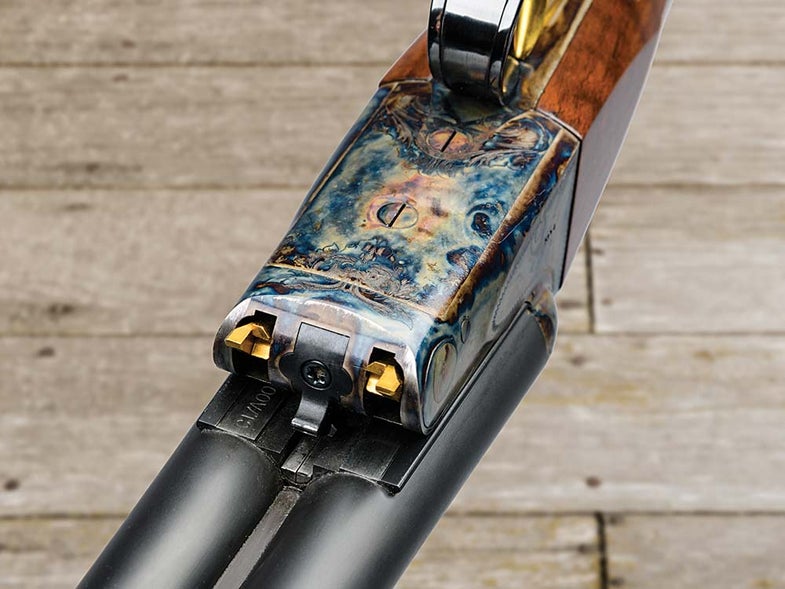 Notable Feature: The gold-colored bits protruding from the action knuckle are the levers that recock the action when the gun is broken open after being fired. Bill Buckley
SHARE

I greeted the news with a Costco-sized dose of skepticism. Savage Arms, which has owned rights to the Fox trademark since 1929, was bringing out a side-by-side shotgun under the legendary name. A host of questions quickly came to mind. Foremost: What on earth were the head honchos at Savage thinking? The demand for new side-by-sides with price tags one buck shy of five grand isn’t exactly robust. And how would Savage’s blue-collar DNA, best known for producing inexpensive, yet accurate, rifles, go over in the snooty blue-blood world of fine shotguns? Then there’s the matter of the Fox faithful. Would they want anything to do with a double gun, no matter how nicely fashioned, that deviates significantly from Ansley H. Fox’s original design? Or would they reject it like a liver from a black-market organ clinic? Stats Gauge: 20 Capacity: 2 Weight: 5 lb. 14 oz. Trigger Pull: 4 lb. 7 oz. L, 4 lb. 8 oz. R Barrel Length: 28 in. Overall Length: 44 in. Price: $4,999 Contact: Savage Arms

Made for the Uplands

Mr. Fox had a track record of gun building long before he founded A.H. Fox, and to distinguish his new venture from his previous work, he dubbed the smoothbores made by his eponymous company “The Finest Gun in the World.” This same boast is printed on the inside lid of the hard-plastic case that the new Fox A Grade guns are shipped in.

These shotguns are available in 12- and 20-gauge, with either 26- or 28-inch barrels. I went with a 28-inch 20 for my evaluation, an ideal upland gun for the country I hunt most.

The high level of craftsmanship on the shotguns is undeniable. And little surprise there, since they are being built for Savage by Tony Galazan’s Connecticut Shotgun Manufacturing Co., which makes the finest production shotguns in the country, and arguably the world.

The new A Grade is a classic double right down to its bones. The action is an updated Anson & Deeley boxlock with a Purdey double under-lug lockup. (While the pedigree of the Purdey system is beyond reproach, this is one of the key differences from the original Fox shotguns, which had a rotary top fastener that locked the barrels in place.) The splinter forend attaches to the barrels with an Anson-style push rod. The pins (also known as screws to us unwashed masses) are timed so their slots run parallel to the axis of the bore. The receiver and forend iron have been color-case-hardened with bone charcoal. The checkering on the oil-finished walnut stock is hand cut, and the top rib is tipped with a simple brass bead. This is pure old-school gun making, as traditional and satisfying as a standing rib roast with Yorkshire pudding.

The Fox has some modern flourishes as well. The double triggers wear a gold titanium nitride finish, as do the ejector sears and some other internal parts.

The barrels are fitted for flush-mounted chokes, and the gun comes with five to fine-tune your patterns.

As befits a dual-trigger shotgun, the stock has a straight English-style grip, and the butt wears a thin piece of slightly concave hard rubber with horizontal striations. The gun mounts easily and stays put while shooting.

Speaking of shooting, whatever reservations I had about the gun in terms of how it fits in with the Savage Arms of today fell by the wayside once I started sending shot skyward.

The Fox A Grade is an outstanding gun. It has beautiful balance and the lively feel that is the hallmark of a great smoothbore. The triggers are crisp and easy to reach, and the automatic safety requires no conscious thought to manipulate.

Often it can take a few rounds to get used to a new gun. Not so with the Fox. It was intuitive from the first time I brought it to my cheek.

There was a serious crosswind at my gun club that first day, and clays launched from the lowhouse took off like they were being chased by the Devil.

No matter. I settled into station 4 on the skeet field and dared the elements to do their worst. The targets bobbed and weaved, but the Fox swung easily and I was able to make minor adjustments and shatter clay after clay. The Fox is one of those rare guns that seems to make you a better shot, an impression confirmed during multiple shooting excursions.

Mechanically, it functioned flawlessly. The ejectors popped the empties clear without fail, and the action, though it locks up as tight as a bank vault, opens and closes with a minimum of effort.

Of course, the gun looks beautiful, too. The engraving is understated, and the matte bluing on the barrels contrasts in a pleasing fashion with the receiver and glossy oiled wood.

It is not a gun for everyone, true. But it is worth every bit of the price tag and certainly worthy of carrying on the Fox legacy in the 21st century.