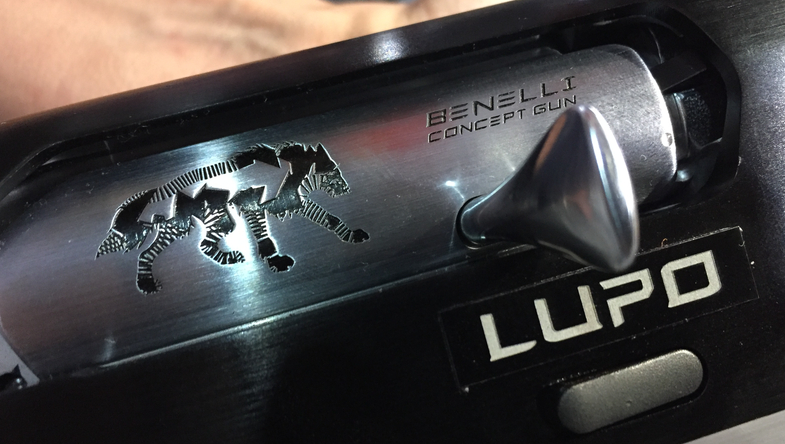 These three concept shotguns from Benelli for 2017 draw inspiration from an alpha predator: the wolf. Natalie Krebs
SHARE

These shotguns from Benelli aren’t for sale, but they are easy on the eyes. Each year at SHOT Show, the Italian gun manufacturer debuts a concept gun. The idea is similar to a concept car: these guns are experimental models produced to test the viability of new design features. Like concept cars, these shotguns look both artistic and futuristic, and you’d be a little afraid to take one for a test drive.

And for good reason: they aren’t for sale, which gives them a pretty high-dollar value in the eyes of Benelli. Their 2017 concept series is called “Lupo,” which is Italian for wolf.

The wolf engraved on the receiver is a design from the Academy of Fine Arts of Urbino (or the Accademia di Belle Arti di Urbino, if you want the proper Italian). This is a declared nod to “alpha predators,” but also, I suspect, a salute to Italy’s heritage (i.e. the founding of Rome by Romulus and Remus). As noted in their somewhat vague press handout, Benelli tried to evoke the wolf in three stylized models. They have “deciphered through mechanics and style what in nature is expressed as muscle, instinct and intelligence.”

But no matter what metaphor they were going for, there’s no denying these shotguns are pretty slick. They’re a one-off production though, and will return to Benelli’s headquarters in Italy to go on display. If you’re curious about their past lineup of look-but-don’t-hunt guns, you can find most of them here. If you’re curious about a Benelli shotgun that you can actually get your hands on, check out our first-look video on their Super Black Eagle 3.