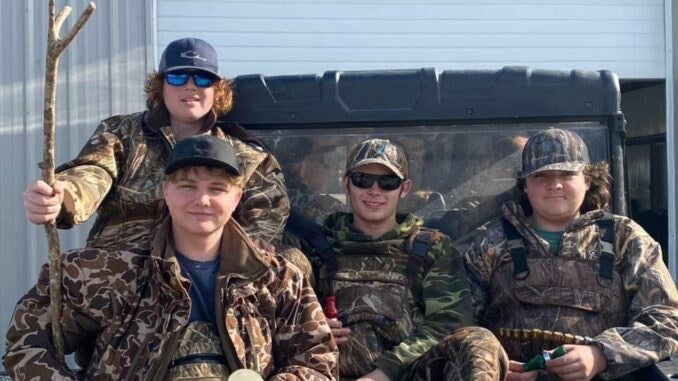 A small plane carrying four adults and four teenagers, who were returning from a duck hunting trip, crashed into the Atlantic Ocean off the coast of North Carolina Sunday. The pilot, along with seven passengers have been identified, and all eight bodies were recovered, according to reports from the Associated Press, NBC News, and The New York Times.

The U.S. Coast Guard initially found three debris fields from the plane wreckage in the Outer Banks. Multiple boats and helicopters searched the area before finding the main cabin Monday afternoon. Authorities have not released the exact locations of where the bodies and wreckage were found.

“Our deepest sympathies are with the Down East community,” says U.S. Coast Guard Capt. Matt Baer.

In a news release, the USCG said it received a report from an air traffic controller at Marine Corps Air Station Cherry Point of a plane flying erratically on Sunday. The single-engine Pilatus PC-12/47 disappeared from radar about 4 miles from Drum Inlet, which is located along National Lookout Seashore between Morehead City and Ocracoke. According to the Federal Aviation Administration, the plane, which was headed for Beaufort, crashed around 2 p.m. The Coast Guard was notified a plane had gone down off the N.C. coast at 2:13 p.m.

Our hearts are with the loved ones of the passengers on the plane during this tragic time. We’re thankful for the efforts of the Coast Guard and other first responders working tirelessly to bring peace to their families. https://t.co/W4Jb7wnvNX

“Our prayers and deep concerns go to the families and loved ones of the passengers,” North Carolina Gov. Roy Cooper tweeted Monday afternoon. “We’re grateful for the people in our state and local agencies who are supporting the efforts of the Coast Guard and other first responders.”

The names of the pilot and seven passengers were released Monday. The group had flown to Hyde County for North Carolina’s youth waterfowl days, which took place on Feb. 5 and 12. The names provided by Carteret County Sheriff’s Office are:

FAA records show Rawls was a certified pilot, ground instructor, and mechanic with more than 20 years of flight experience. Stephanie Fulcher, the mother of Jonathan McInnis, posted pictures from the hunting trip to her Facebook page Sunday, hours before the plane crash. The four teenagers were all students at East Carteret High School.

“School counselors, school psychologists and school crisis team members have responded from across the school system to serve and support the students, staff and families in the impacted schools,” spokeswoman for the Carteret County Public School System, Jennifer Johnson, said in a statement.

The family of Douglas “Hunter” Parks, and the company he founded—Green Assets, an environmental consulting business—released a joint statement after learning of the crash.

“We can confirm that Hunter Parks was among the passengers of the flight that crashed into the Atlantic Ocean on Sunday afternoon. We are grateful for the many men and women—authorities and volunteers—who remain active in the recovery operation and investigation. We sincerely appreciate the outpouring of love, prayers, and concern expressed over the incident,” the statement said.

Read Next: What Really Happened to the Duck Hunters Who Were Killed on Reelfoot Lake?

Three Coast Guard stations, local fire and sheriff’s departments, and the National Park Service all participated in the search for the plane wreckage and passengers. The National Transportation Board is investigating the cause of the crash.

Correction: The main image for this article originally pictured three duck hunters who were on the hunt, but not on the plane that crashed. The photograph has been updated.