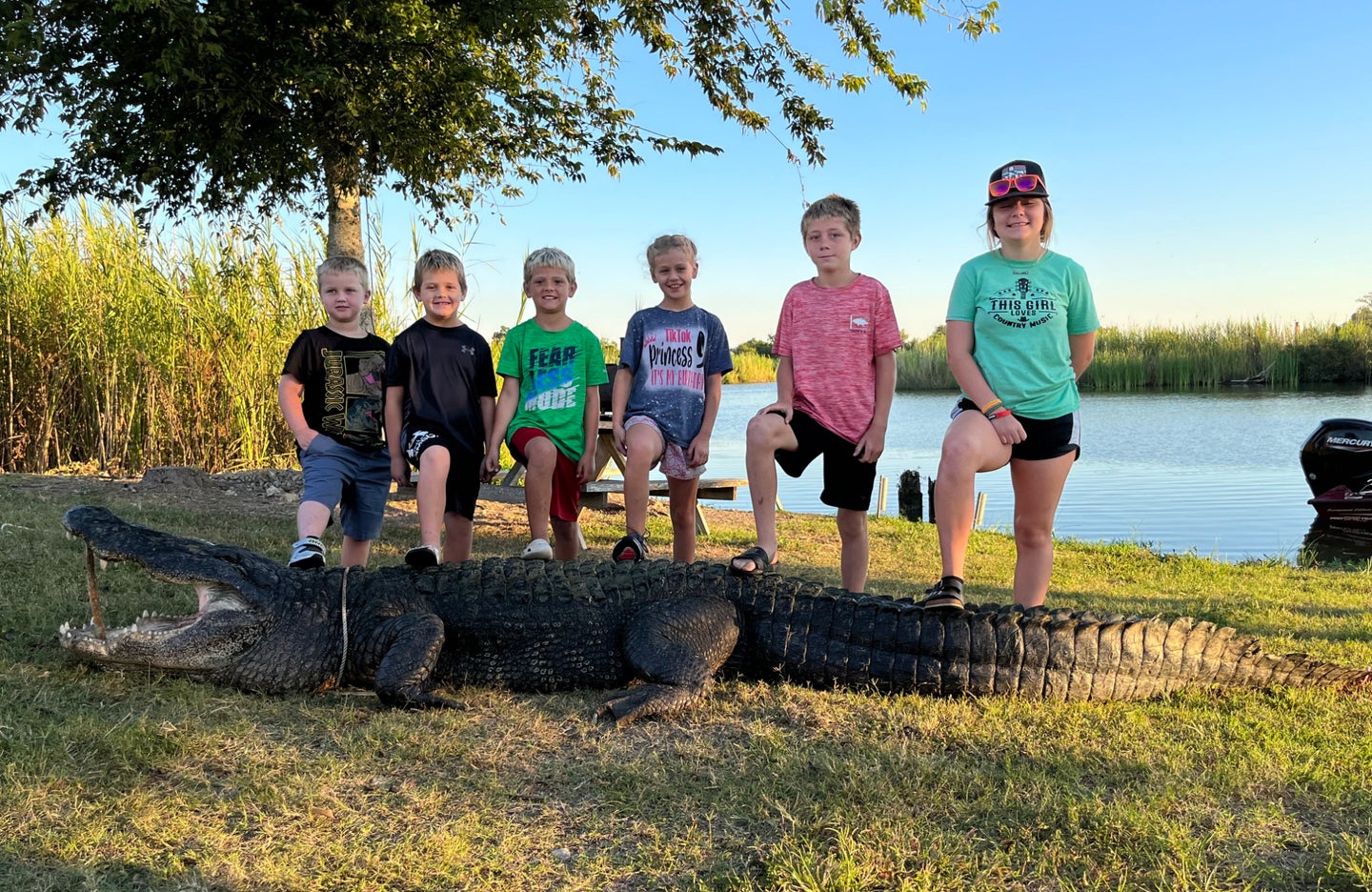 Alligator season in Anahuac, Texas has been good to David Fontenot. Last year during Texas Gatorfest, he caught the biggest alligator of the day, winning the contest with an 11.5-footer from the George Ruby Bend of the Trinity River behind the Alligator Alley RV Park. This year on Sept. 14, just two days before Gatorfest 2022 was set to begin, Fontenot and his family lugged in a 14-foot gator from the same water behind the same RV park, leaving Fontenot just three inches shy of the Texas state record.

Fontenot, 56, was familiar with the massive gator, since he’s a part-time resident of the aptly-named Alligator Alley. The park sits right where the Trinity River dumps into the Anahuac Channel, which runs from Lake Anahuac to Trinity Bay east of Houston. Fontenot told Outdoor Life the gator lived behind the RV park last year, then he disappeared for the winter and spring and reappeared two days before the season began on Sept. 10.

“There are some big ones out there,” Fontenot told Bluebonnet News. “They are out there every night…We were kind of concerned about kids and pets in the parks because this thing was so huge.”

Fontenot used chicken as bait at first, but was then shocked to discover it wasn’t attracting the big gator. Then he tried beef liver, which also didn’t work. In the evening of Sept. 13, at his wife’s advice, he switched to mullet, a saltwater fish that’s generally considered “trash fish” by Gulf Coast residents. The gator, on the other hand, ate it right up. After Fontenot realized they’d caught the massive gator, they dispatched him quickly.

READ NEXT: Four Fatal Gator Attacks in 76 Days Is a Statistical Anomaly. Here’s Why It Happened

A gator this long could have weighed close to 1,000 pounds, so rather than trying to lift him out of the water, Fontenot and his sons-in-law towed the gator to the shore. From there, they lashed him to a boat trailer and hauled him out of the water as if he had an outboard motor and a fiberglass hull.

Fontenot and his family took the gator to Porter’s Wild Game Processing where Casey Hedges, the owner, bought the full gator from Fontenot with intentions to display him at the store. Hedges told Fontenot it’s the biggest gator he’s ever seen and there’s a good chance it’s the biggest one ever caught in Anahuac. Fontenot couldn’t enter the gator in the Gatorfest competitions since he snagged it before the festivities began, but it’s safe to assume a 14-footer would have stood a chance to win Fontenot another daily catch contest.

“We hauled him out on Wednesday and Gatorfest wasn’t until Saturday, so we could have left him out there but I didn’t want him to suffer. Or we could have put him on ice until then, but then we would have lost the meat,” Fontenot says. “The biggest one brought in for Gatorfest this year was 12 feet and nine inches, so we know we would’ve taken it.”