"Every year, I aim to broaden my hunting abilities a little more. I also aim to harvest a bigger buck than last year" 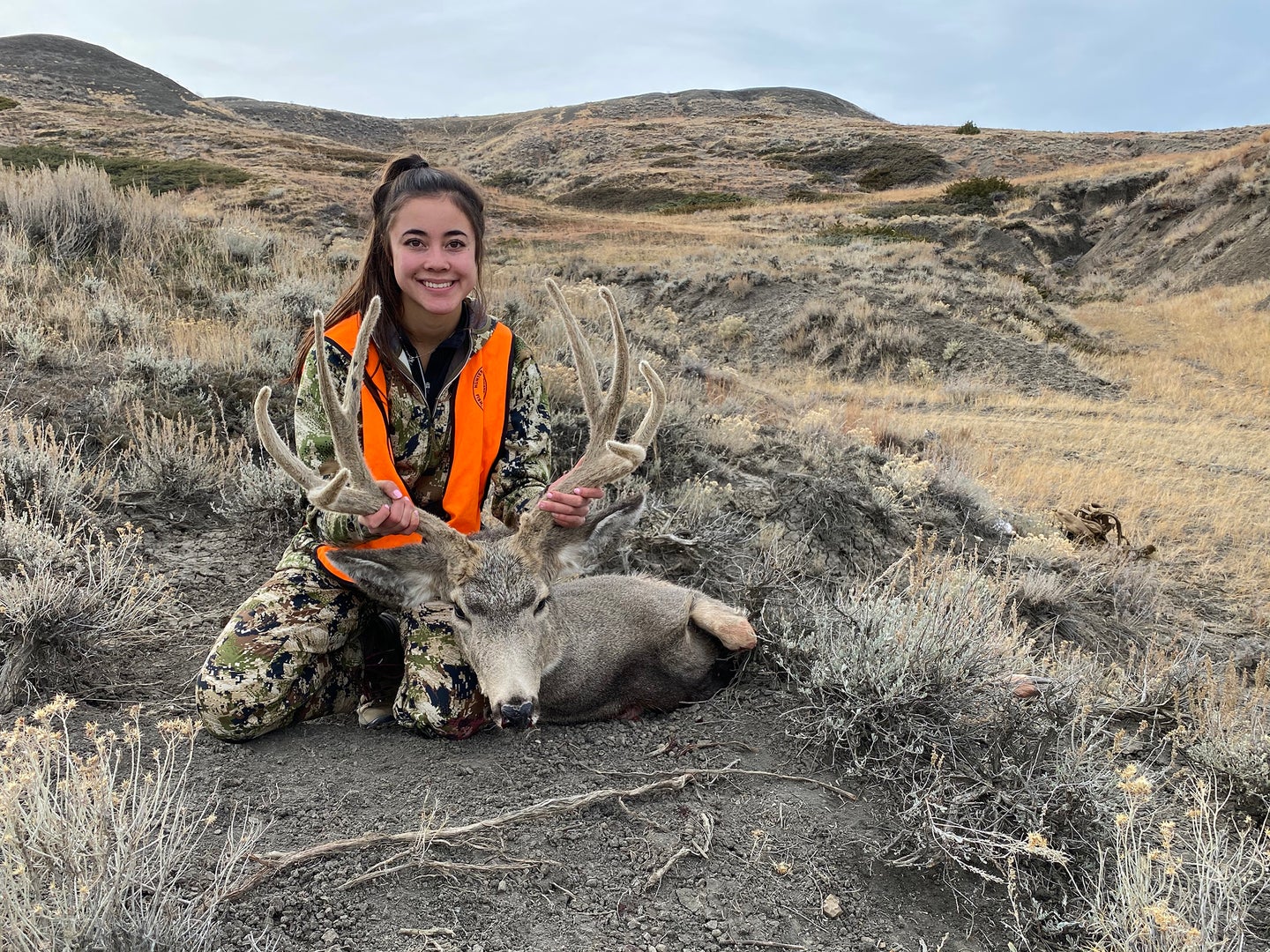 The author with her sixth buck. Andrew McKean
SHARE

This story originally ran in the 2021 No. 4 Issue of Outdoor Life. Find out how to read more stories from that issue here.
In early November, on a warm, breezy evening a few days after my high school’s football team lost a state playoff game, I filled my deer tag. After nearly three hours of glassing on the fringe of an alfalfa field and seeing no signs of antlers, I was sure the hunt would be a bust. But just before last light, out stepped four beautiful whitetail bucks. As they fed closer to my grassy hideout, I focused my attention on a tall, heavy 5×4.

He wasn’t the biggest buck in the field, but he offered the best shot. When I wrapped my tag around his antlers, he became my biggest whitetail in seven years of hunting. More remarkable than the rack and body mass of my buck was the experience. I’m 17 years old, and this was my first successful solo hunt.

To me, progression as a hunter is what trophy hunting means. Every year, I aim to broaden my hunting abilities a little more. I also aim to harvest a bigger buck than last year.

I shot my first buck when I was 11, barely strong enough to carry my gun up and down the hills of our pastures in eastern Montana. My dad is the hunting editor of Outdoor Life, and I felt I was expected to follow in his footsteps and become a passionate hunter myself, even though I was still a bit shaky on the idea of killing an animal. I had tagged along on countless hunts with my dad. But when it came to actually carrying the gun, I was apprehensive.

So my dad eased me into it, helping me sight in my rifle and taking me on scouting hikes through the hills where there was no pressure to pull the trigger. I got more comfortable with hunting after each outing. My father woke me up before sunrise on Nov. 1, 2015, and with a thermos of hot chocolate in my pack and my .243 slung over my shoulder, we headed for the hills. As we crested a knoll and hunkered down to glass the valley, a herd of mule deer filtered into a field directly in front of us. One of those deer was a wide 3×4. To have an animal in my crosshairs for the first time was so exhilarating that…I missed.

I collected myself, chambered another round, and made the shot, only vaguely aware that I’d started down a path I’d follow for the rest of my life.

With my second year of hunting came an entirely new learning curve. That was the year I became aware of how clumsy I was as I blew countless deer out of our fields and spooked herds of antelope on my first few hunts. But still, I shot a tall, narrow whitetail and a beautiful antelope buck. I even traveled to Maui with my dad to hunt axis deer and wild boars.

The Maui experience was a glimpse into what hunting could offer: new places and new species. Hunting through the lush hills and sandalwood forests of inland Maui, I began to -appreciate hunting as more than a sport and my pursuit of animals as more than a conquest. I started to understand hunting as an opportunity to immerse myself in the raw beauty of wild lands. It was rewarding too when, in the last light of the final night, I shot a wild boar that was the envy of the Hawaiian boys we passed on our way back to town.

In my third year, continuing my streak of hunting on my family’s property, I shot a beautiful 5×4 whitetail buck with an impressive body mass. That hunt sparked a personal goal to try to kill a better buck every year.

A season later, after an intense stalk through brambles and tangled willow reeds, I shot a tall 4×4 mule deer. This hunt is especially memorable because it was spent hiking the land I loved most with my dad, intentionally hunting a herd of deer we had been watching all season.

The next year, I shot the biggest mule deer of my young career. His tall, wide, heavy rack still amazes me, even now as he hangs as the only deer in my room. His antlers hold the medals earned from my other passion, distance running in track and cross-country.

This hunting season was the culmination of everything I learned in my first seven years. I am proud of this latest step in my hunting career. I proved to myself that I can harvest an animal on my own, and I also quieted the boys in my school who say I’m not a real hunter without my dad.

I’m now able to read animal behavior, make a stalk, and harvest an animal on my own. The idea of shooting a trophy deer is important to me, but so are the experiences and lessons learned along the way. Each year, I have harvested a more impressive or intriguing animal than the year before, but the lessons I have learned are more enduring. I’m hunting for antlers and meat, but also knowledge and skills that I can apply to my next season—and to other challenges in life. Every successful hunting experience has been rewarding, putting food on the table straight from our land and spending time with the people I love.

I’ve never shot a record-class deer, but next fall, when I return home from college, I will try.