Incredible footage shows that when times are tough, it's a lynx-eat-lynx world out there 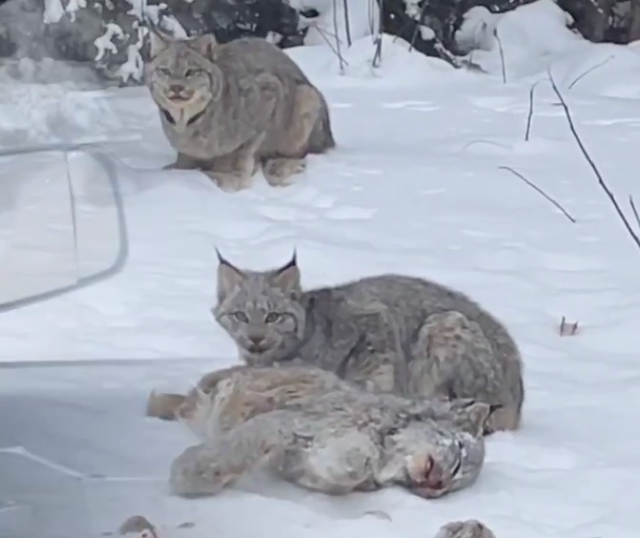 A female lynx is feeding on another female lynx, while a male watches from behind. @natureismetal
SHARE

Although Canadian lynx are considered threatened or endangered in parts of the Lower 48, they have healthy populations in Canada and Alaska. These medium-sized wild felines are similar to bobcats, but with longer legs, larger feet, silvery fur, and unique ear tufts. The lynx is an icon of the North, and a super predator for its weight class. The lynx is built for killing, and it will take down game as large as caribou at times; something a trapper I know witnessed firsthand.

But as you can see in the video below, lynx will also eat each other.

Lynx primarily prey on snowshoe hares, which are in constant population flux. So in that classic predator/prey cycle, lynx populations also fluctuate up and down following hares. Here in Alaska, snowshoe hare populations will explode from only isolated small pockets of animals, to booming hare populations seemingly everywhere. The hares exceed carrying capacity within a few years, and then their populations crash again. When the hares disappear, lynx will prey upon grouse, squirrels, and anything else they can kill, including each other.

It’s long-told trapper lore that when lynx numbers drop, adult male lynx will eat most of the kittens, and many of the females. Anecdotally, while trapping during low population cycles, nearly all the cats that I’d catch would be big males, known as toms, which were fat and healthy. When hare populations are high, a lynx will typically be very lean due to the low fat content of the hares. When they’re eating grouse, ptarmigan, and other cats, they’re often fatter.

One of the first stories I ever wrote for Outdoor Life was a trapline photo gallery that showed a lynx I’d caught in a snare, which was then completely devoured by other lynx. The video above comes at a time when lynx populations are at their low point in many areas, and they’re hungry. The video is edited a bit, but opens with a female lynx feeding on the carcass of another female lynx, while a male lynx lies in the background. Sex is easy to determine by the face and length of the ear tufts; males will almost always have tufts longer than 1.5 inches. After a cut in the footage, the male lynx is seen burying the carcass with snow, then the female tries to drag it off elsewhere. Since this footage was filmed close to a road, it’s possible the dead lynx was first hit by a car. But still, it’s interesting footage.

The lynx is a fascinating and beautiful animal, and many criticize open seasons for trapping and hunting them. In Alaska, seasons are often extended when populations are high, because the crash is coming regardless of trapper harvest. Even with trapping and hunting, the majority of lynx will end up starving or being eaten by other lynx when the hare population crashes. It’s a vicious cycle, but it’s one that’s lasted from time immemorial.