Here's everything you need to know about making, and hunting, mock scrapes 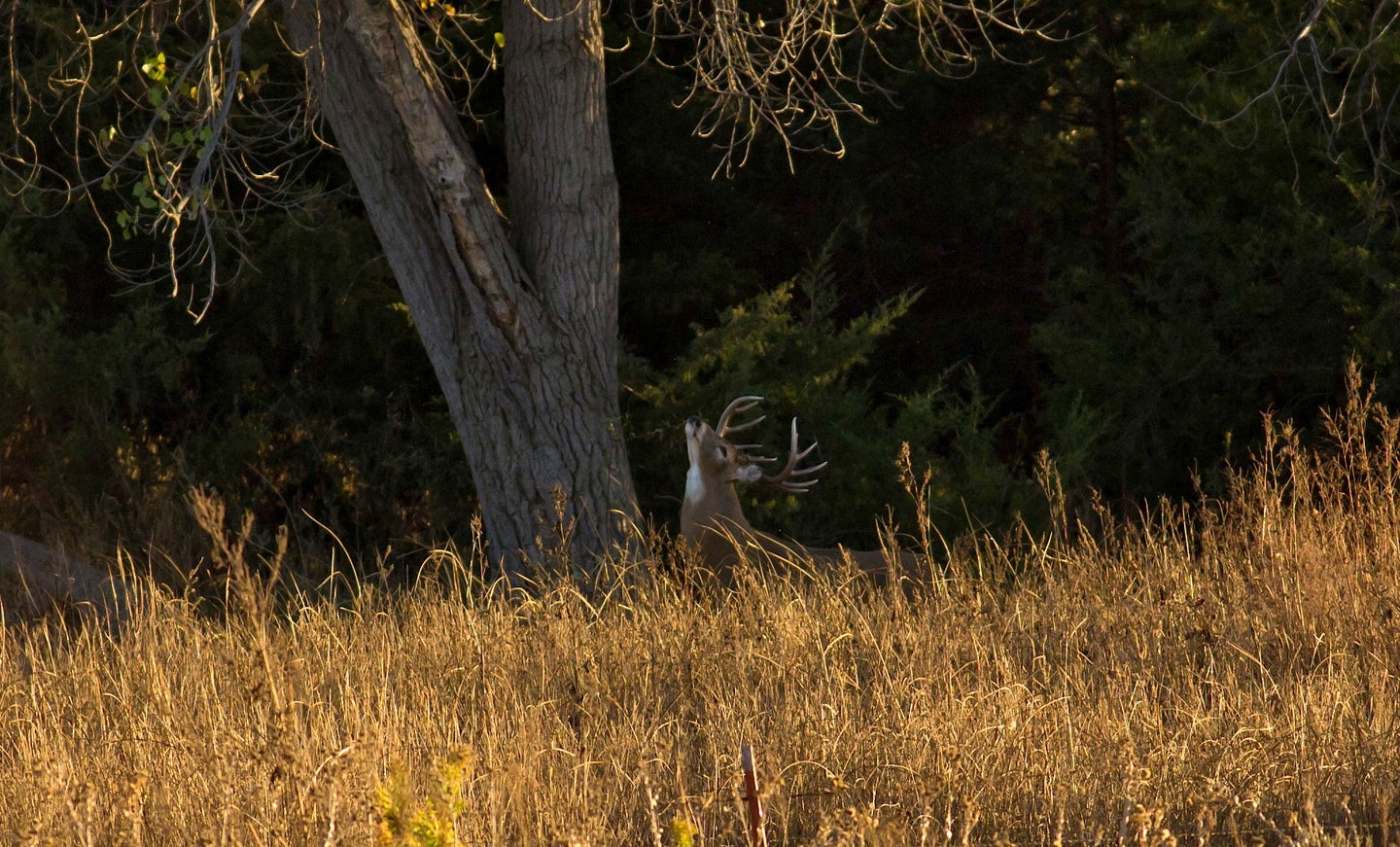 The goal with a mock scrape is to have deer use it as their own. John Hafner
SHARE

Mock scrapes (a hunter-made version of a whitetail scrape used to attract deer) have been a part of hunting media and folklore for decades. Generations of deer hunters have given their anecdotes and opinions on hunting over real and fake scrapes. As with most things in hunting, the bulk of deer hunters either love or hate mock scrapes. They are either the saviors of a deer season, or the biggest waste of time. You’ll find few deer hunters in between.

For example, Tim Andrus, host of Rush Outdoors, says he doesn’t touch them. “I don’t mess with mock scrapes,” he said. “I know some guys use them with trail cameras. I try to sneak in and out without deer knowing I’m there.”

Jared Mills, co-host of Midwest Whitetail, is on the other end of the mock scrape debate. “From late summer through the rut, scrapes are the primary focus of my trail camera strategy, which ultimately plays a big role in my hunting strategy,” he said.

Whether you’re for or against mock scrapes, it’s useful to learn a little more about those stinky, muddy, urine-stained pits. Here’s your ultimate guide to mock scrapes.

To understand mock scrapes, you must realize what real scrapes are. These are communal spots where deer scrape up the ground and rub up against a branch above the scrape. They serve as a means of communication between deer. Most experts believe that general communication between deer is deposited via scent, and deer can identify the unique markers left behind by individuals. Some biologists also think reproductive status is shared as well.

“Scrapes are one of the main ways deer communicate,” said Kip Adams, chief conservation officer for the National Deer Association (NDA). “Deer are far more social than most hunters realize, and scrapes serve as a signpost for them to share information.”

While most scrapes serve the same purpose, there are different types. While virtually all scrapes are “community scrapes,” some are larger, located in areas of higher deer density and traffic, and get used by a lot of deer. These are very large, often reaching several feet in diameter. These might remain open most of the year, even during spring and summer.

Then there are other, lesser-used scrapes. Sometimes, these are in areas with less deer movement, and never become what we’d consider “community scrapes.” In other instances, scrapes are made on a whim by a frustrated buck and aren’t really meant to serve as longstanding communication centers. Oftentimes, these do not have a licking branch, which is a vital component of a viable scrape.

Scrapes share other common characteristics, too. The primary component is exposed soil. A lightly used scrape might only be several inches across, but larger ones can grow to several feet. Next, deer must urinate in these for them to be considered a scrape, and not simply an outlet of aggression. And, as mentioned, it must have a licking branch approximately 45-60 inches above the ground.

Just as with any aspect of deer hunting, scrapes aren’t immune to a fat, juicy myth or three. The biggest of the whitetail lies? Scrape lines. This is the idea that a buck makes a series of scrapes that run in a straight line and those are the scrapes that he visits.

“A big myth is that bucks have a scrape line,” Adams said. “Research shows that’s not true. Bucks (and does) can and will visit multiple scrapes to advertise their presence and collect information on other deer in the area.”

Mills agrees, and says scrapes aren’t really made in lines, but are more dictated by terrain and property layout. “I focus my attention on a single well-used scrape or cluster of scrapes, rather than trying to come up with a connecting line of them,” he said.

“Another common myth is scrapes are great places to hunt over,” Adams said. “Research shows about 84% of scrape use occurs at night, so rather than hunting over them, it’s often better to hunt near them (between the scrape and good cover). However, that still means around 16% of scrape use occurs during daylight, so many bucks have been killed at scrapes.”

So, figure out how to use this data in your own hunting scenario. Don’t expect a ton of daylight buck activity over scrapes but know that they are useful for running trail camera purposes. And know that you definitely can kill mature bucks over a scrape (especially in late October around Halloween).

Your goal with making a mock scrape is to convince deer to adopt it and use it as their own. The first step in accomplishing that is placing mocks in natural spots. Position these in high-traffic areas, such as trail intersections, staging areas, pinch points, food source edges, near isolated water sources, and close to bedding areas.

“Bucks love to scrape on field edges or anywhere two or more vegetative cover types meet, so those areas are also great places for mock scrapes (and a trail camera to monitor them),” Adams said.

The second step is finding a good licking branch. These aren’t located just anywhere. It needs to be a lone branch that sticks out and grabs attention. It also needs to be approximately 45-60 inches off the ground. Too low or high and it doesn’t serve its purpose. Deer deposit scent on these, and if they must bend down to do so, they won’t use it. The same is true if it’s so high they can’t reach it, although I have watched bucks stand on their hind legs to reach a licking branch.

“You want more than just the bucks to utilize it,” Mills said. “Chest high is a good spot to aim for. However, during the early season, I will hang it closer to waist high so that when the leaves start to fall and the branches lose some of that weight [and then raise higher in the air], it will end up around chest high.”

Just as with real scrapes, exposed soil is vital. Rake away grass, leaves, and other debris to create an oblong-shaped scrape. I prefer to make these approximately 2 ½ feet tall by 2 feet wide. This fresh-smelling dirt grabs deer attention before they ever see the scrape. Making these larger amplifies the smell, so don’t be afraid to get crazy with it. Some real scrapes become truck-hood-sized over time.

The final step is optional, which is depositing scent. Where legal, this can be some variety of buck or doe urine. If that’s banned, and synthetic scents are allowed, perhaps try that instead. Also, just urinate in it yourself. Yes, that works, too. Or do nothing at all. Merely exposing the soil is sometimes enough to jumpstart fake scrapes.

While it might seem difficult to screw up making a circular spot in the soil with a damp spot in the middle, it’s certainly possible. “A common mistake people make with mock scrapes is not creating a vertical aspect to the licking branch,” Mills said. “Whether you use a vine, oak branch, cedar branch, rope, etc., it’s important to make sure there is something hanging vertically out away from the trunk of the tree you’re placing the scrape under. That vertical aspect will get way more attention than a branch that is sticking straight out.”

Given that a small percentage of scraping occurs during daylight, there’s more to using mock scrapes than simply hunting over them.

“I believe scrapes are the best way to inventory the bucks in your area,” Mills said. “Beyond that, it’s a great way to monitor the activity levels of those bucks, especially during the early season and pre-rut.”

Adams likes these for taking inventory, too, but not so much for hunting over. “Knowing deer use these regularly, we can be successful hunting near [mock scrapes] if we set up between good cover (bedding area) and a scrape,” Adams says. “This allows us to cross paths with a buck as he heads to the scrape.”

That said, if you find a good scrape close to known bedding, it might be better to hunt the downwind side of the scrape. “I’ve killed bucks over scrapes. As I mentioned before, especially during the early season and pre-rut, bucks spend a lot of time both day and night working scrapes,” Mills said. “That’s not to say that if you find one it’s automatically a great place to kill a big buck, but don’t avoid these. These are simply another piece of the puzzle when trying to pattern and kill mature bucks.”

So, when is the best time to make mock scrapes? All year long. Deer are constantly communicating in this manner. Scrape use gradually increases through summer, early fall, and peaks just prior to the rut. It drops off during peak rut (when bucks are spending more time tending to does), and then slowly picks back up after the majority of does exit estrus. So, if you plan to make a mock scrape, do it now. Scrape activity should be hot over the next few weeks.