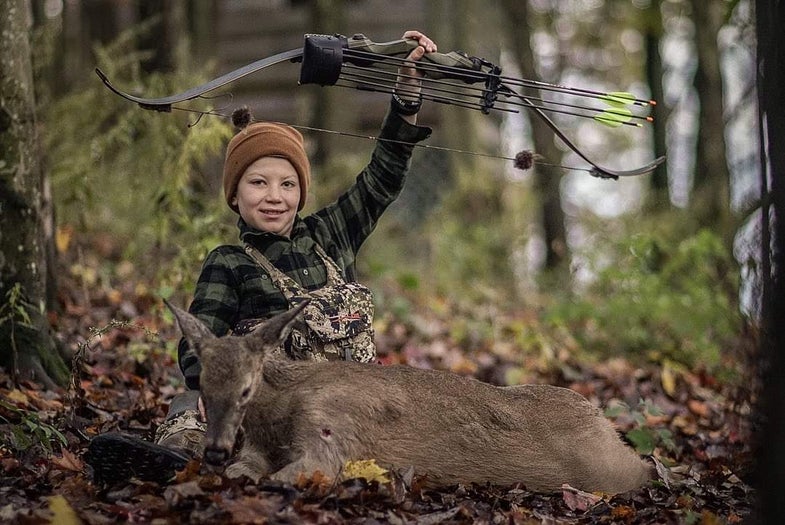 In the stillness of the Pennsylvania woods, 9-year-old Finn Merrow and his dad sit in a ground blind. The morning is cool and rainy, dampening the sounds of footsteps on the forest floor. A father and son hunting together in October is nothing unusual in itself—it’s a rite of passage for many. And yet, this hunt is slightly different. Finn isn’t hunting with a crossbow, or even a compound bow. Instead, he has chosen a recurve. This isn’t his first hunt with a stick and string, either.

Finn was only two years old when he started shooting a longbow. His dad, Kevin Merrow, owns TradGeeks, and has been shooting traditional archery for 11 years. He was inspired to get his son into the sport too, and Finn took to archery immediately. Kevin bought Finn a compound several years ago to try to get him into bowhunting a bit earlier, but Finn showed no interest. He wanted to pursue traditional bowhunting like his dad.

Several times a week, Finn practices with his bow: a 35-pound “Ibex” custom recurve built for him by Wengerd Archery. Finn has proved that 35 pounds—the minimum draw weight for hunting in Pennsylvania—is more than enough to ethically kill a big game animal. The accuracy of any bow or gun is, after all, more about the shooter than his equipment.

“I didn’t really look to push archery on Finn,” his dad says. “I guess he just fell in love with it like anyone does. He loves to challenge himself and work hard for things. He finds the value in hard work and its rewards.”

Last year, when he was only eight, Finn took his first deer with traditional equipment on a beautiful November day. He made a perfect 15-yard shot from his ground blind, and a quick recovery on a young doe. This was Finn’s fourth deer, but his first with archery equipment.

“I was pretty speechless at the moment,” Kevin says. “All I can say is this kid never ceases to amaze me.”

Many people don’t stick with traditional bowhunting long enough to tag an animal, but Finn’s early success made him want to do it again. Finn was determined to fill a tag with his traditional bow again this year.

A Second Season with His Stick Bow

Which brings us back to the morning of Oct. 25, where Finn and his dad patiently await daybreak. After almost filling a tag a few weeks earlier, they were hoping that today would be the day. They had spooked deer on the way in, and then right at first light, three deer walked into view. Finn and his dad watched the deer for awhile, and Finn passed on a small doe fawn knowing that a bigger deer would probably come through. The fawn bedded down in front of them, and the woods fell quiet. Then, a button buck came into view and Finn decided that it was a his deer. Shooting tab on the string of his recurve, neon fletchings bright against the darkness of the blind, he waited until the perfect shot presented itself.

The deer stopped at 18 yards, broadside, and Finn went through his shot process before sending a 125-grain broadhead exactly where it needed to go. The arrow slipped through the heart and lodged inside the opposite shoulder blade. The deer bounded off, and Finn knew he’d made a great shot. There’s no feeling quite like knowing your shot went exactly where you wanted it to, and this is especially true with traditional archery.

“I could see the nock for like a second and there was nothing in my mind but, I hit her right where I was supposed to,” Finn says. “I’ll never forget that.”

Finn and his dad found the deer quickly. Its gray winter coat blended with the wet leaves on the ground, white belly a stark contrast against the otherwise neutral landscape.

“It was different from his first deer with a recurve,” Kevin says. “It was a moment that has been building up for a while. A look into each other’s eyes that will never be forgotten, followed by a long hug. Almost a sense of relief. I saw a sense of confidence overwhelm him—that feeling that he believes in himself as a hunter.”

Taking a deer with traditional archery equipment is a feat no matter who you are; for a 9-year-old to successfully take not just one deer, but two, in back-to-back seasons is nothing short of incredible. Traditional archery takes patience, perseverance, and time. Not everyone is willing to put in the work to make it happen, yet Finn did just that. “He is a patient kid that will sit in the woods for hours,” Kevin says.

When asking Kevin what’s next for Finn, he says that Finn will continue to hunt with his rifle, recurve, and .410 shotgun.

“He is now going to start focusing on his woodsmanship,” Kevin says. “It’s time for him to start making more decisions on hunting locations, setups, and tactics.”

Finn says he enjoys traditional bowhunting for the challenge, and more time spent in the outdoors. He truly loves spending time in the woods with his dad. In a world where everyone is in a rush, and always want instant gratification, this young man is proving that slowing down and enjoying things that take a little more time, is usually worth it.