Senate Fails to Reauthorize the Land and Water Conservation Fund 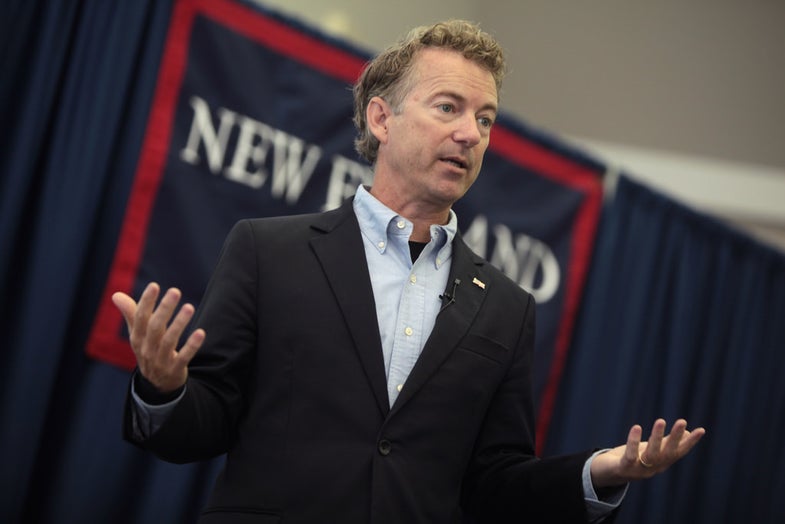 Senator Rand Paul (R-KY) was one of the legislators responsible for stalling the public lands package. Via Flickr
SHARE

America’s bedrock law for protecting public access to the outdoors and providing quality hunting and fishing habitat is dead and cold on the floor of Congress. Blame the U.S. Senate, who decided to play Grinch before Christmas.

For 50 years, the Land & Water Conservation Fund has funded efforts to protect key habitats, provide fishing access sites, family fishing ponds and city parks around the United States. That law expired on Sept. 30, and despite desperate midnight negotiations, was not reauthorized by the Senate last night.

The Senate passed a “continuing resolution” to keep the government open and funded into 2019. That bill was the last legislative train out of the Senate before the holiday recess—and before the New Year when leadership of the House of Representatives changes from Republican to Democratic hands.

LWCF reauthorization was part of a package of public lands bills that had passed the House and had strong bipartisan support in the Senate. However, Sen. Mike Lee, R-Utah, and Sen. Rand Paul, R-Kentucky, held the public lands package up. In the end, Senate leadership pushed the funding bill forward, without public lands provisions. “We will take a much-needed break and be back at work next year,” said Amy Lindholm, of the LWCF coalition. “Senate leadership promised that the public lands package would be one of the first pieces of legislation to be considered in the New Year.”

She acknowledged that the leadership shake-up on the House side adds complexity and uncertainty to future negotiations.

Meanwhile, American outdoor families pay the price for DC malfunction. LWCF is paid for by a royalty on off-shore oil production. Every day the fund is left to languish, that funding pot loses $2.5 million. That is worth restating: $2.5 million in conservation funding are lost every day the LWCF is not reauthorized.

“These critical public lands and sportsmen’s measures were teed-up with broad support and ready to go, yet Congress still failed to get them across the finish line,” said Whit Fosburgh, president of the Theodore Roosevelt Conservation Partnership. “While we truly appreciate the best efforts of some lawmakers that went to bat for this, we are disappointed to see common sense solutions kicked down the road yet again.”