3 Ways to Catch Big Catfish Without a Rod and Reel

Use jugs, limbs, and trotlines to hook more cats 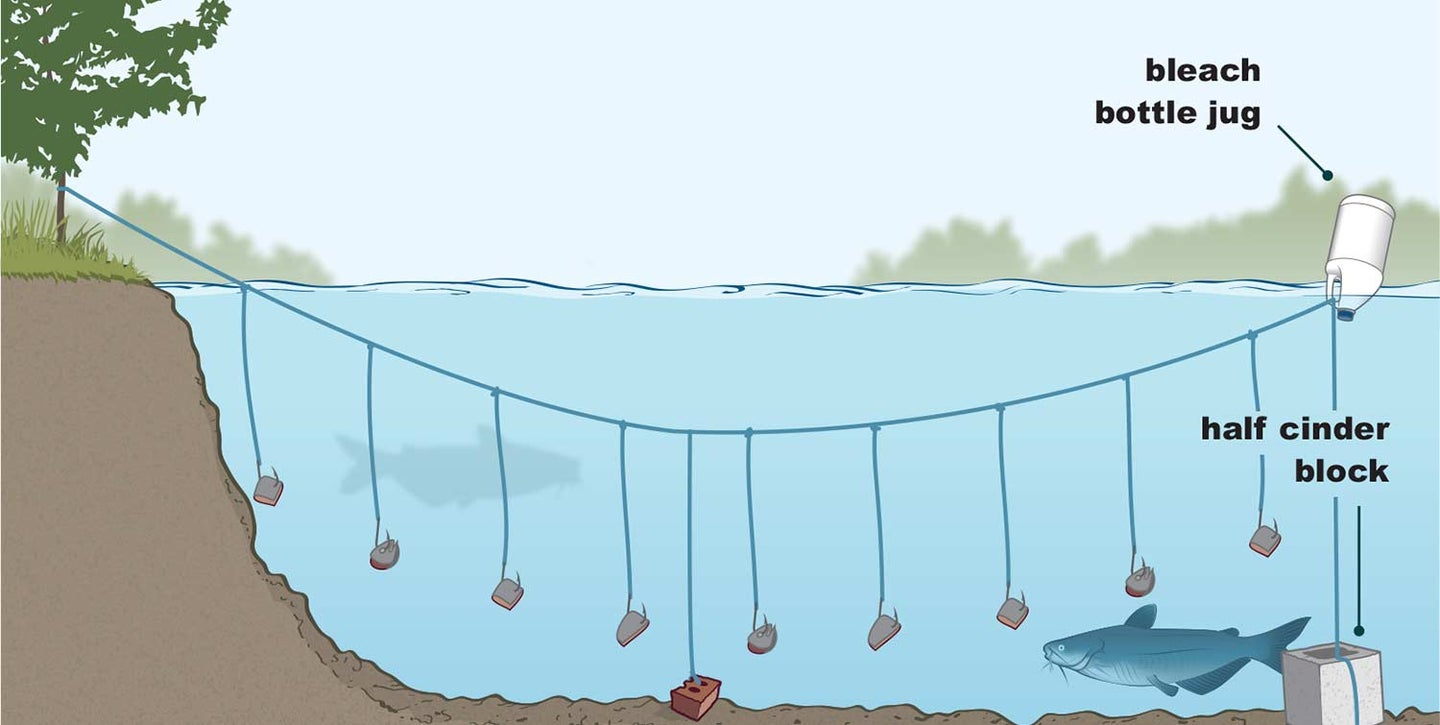 The hooks that hang in short, regularly spaced lines are the trots. Pete Sucheski
SHARE

Fighting a big catfish on a rod and reel is pretty dang fun. But if you’re looking for more efficient means to a fish fry, you’d better learn these methods of trapping cats (just check your local regs before hitting the water).

Old-timers used to call it blocking because wooden blocks were once used as floats. Now folks use milk or soda jugs. Tie several feet of stout line to each handle or neck, add a circle hook, bell sinker, and bait (night crawlers, hot dogs, and shad chunks work well), and you’re ready for action. Release the jugs several feet apart and let them drift.

Each jug functions like a big bobber. When a catfish bites, the jug stops and bobs. When the bait is swallowed, the jug zips away or plunges underwater. Small catfish are usually quickly captured. But big bruisers may submerge a jug repeatedly before anglers in a boat get close enough to net them.

A limb line consists of a baited hook and line tied to a stout yet springy limb overhanging the water. Willow limbs and cypress branches are often used because they’re pliant, keeping hard-fighting catfish from pulling hooks free or snapping the line. Mark each with brightly colored tape so you can easily find your sets. Live baits like sunfish and frogs work best. Rig each so it hangs at the water’s surface, creating a catfish-attracting commotion. To coax heavyweights, try a ­6- to 8-inch live carp, sucker, or bullhead that will really splash. Run lines often. When you see a limb bouncing, you know a fish is hooked. Could be a nice channel cat, or maybe a monster flathead or blue.

Trotlines usually have 10 to 25 hooks that hang from short, regularly spaced lines called trots. Trotlines allow you to catch lots of catfish quickly. The heavy nylon cords, large hooks, and big swivels used to make each line can subdue even the fattest cats. Target transition areas—where a tributary flows into the main lake, for example, or a side channel rises onto shallow flats. Tie the trotline between snags or make anchor points. Then, after baiting the hooks, add a weight in the middle to pull the line near the bottom. Chunks of oily baitfish are ideal for big blues and channel cats, while flatheads prefer live bluegills and suckers. Work with a buddy. Both anglers should carefully grip the main line and pull their way along it, removing fish and rebaiting.