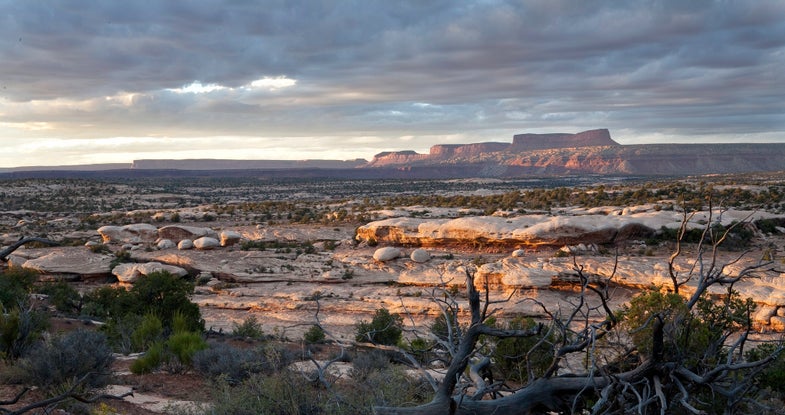 Two-thirds of the land inside the state boundaries of Utah is managed by the federal government. That makes the Beehive State second only to Nevada, which contains 81 percent federal land, in percentage of property managed by the Bureau of Land Management, Forest Service, National Park Service, and other federal agencies.

The immensity of accessible federal land is partly what makes Utah such a destination for hunters, hikers, and other outdoor recreationists. And it’s what makes the state such a great host for gatherings of companies that make gear for and cater to outdoor enthusiasts. For over 20 years, Salt Lake City has hosted the twice-a-year Outdoor Retailer show, a big sports exposition in which companies show off the latest gear for skiing, hiking, mountain biking, rock climbing, and other “green” activities.

Salt Lake also hosts another gathering of outdoor enthusiasts, so-called “consumptive” users of public land—big-game hunters—at the annual Western Hunting & Conservation Expo. This year’s Expo opens this Thursday and is expected to attract more than 40,000 people, most of whom are experienced public-land hunters. Full disclosure: I sit on the national board of directors for the Mule Deer Foundation, which helps sponsor the Expo.

All that federal land in Utah — land that is home to the mule deer, bighorn sheep, elk, pronghorn antelope, and moose that Expo attendees love to hunt — sits uneasy among many powerful people in Utah. They don’t like the idea of the federal government overseeing all that land inside Utah’s borders, and think the land would be better managed under state control. The idea is that with more local oversight, local priorities like funding, resource extraction, and multiple-use access would be easier to achieve. Critics of state control say it would make public land easier to sell off or to mine and drill for minerals.

And last month, after outgoing President Obama used the Antiquities Act to designate 1.3 million acres of mostly federal land in southeastern Utah a national monument, Utah’s legislature and governor passed a resolution calling on President Trump to rescind the designation, saying that it was a gross overstep of federal authority.

That action by state officials led a number of outdoors companies to propose boycotting the Outdoor Retailer show, which brings $45 million in direct spending to Utah annually. Patagonia, the outdoor clothing and gear company, has been one of the most vocal boycott-promoters, saying that the show should move from Utah because of “a hostile environment that puts our industry at risk.” In a related move, the Outdoor Industry Association, comprised of a number of high-profile outdoor brands, circulated a letter urging Trump and Congress to “keep public lands public.”

All this posturing has produced a lot more smoke than heat, especially because state officials are not advocating closing public access to public land, but rather giving more control to state managers. Federal-land advocates maintain that any transfer of federal land is problematic, because states historically have been unable to fund management duties.

SHOULD WE BOYCOTT UTAH?

This brings me back to the question I posed in the headline. Should hunters be as concerned with the federal-land management question as our “green” cousins are? Should the same “Boycott Utah” agitation that is rocking the Outdoor Retailer world be extended to the Expo?

Here’s why it’s an important question: If anything, I’d argue that hunters have even more at stake in this land-management discussion than skiers, snowboarders, and rock-climbers do. Those high-profile sports generally take place in the peaks, alpine bowls, and canyons that have a long tradition of broad public appeal (not to mention politically connected advocates like the ski industry, which contributed $1.7 billion to Utah’s economy last year). Hunters don’t have that kind of economic footprint, or Winter Olympics-level publicity working on our behalf, but the animals we pursue are disproportionately dependent on federal land for their welfare. And mid-elevation federal land that, say, mule deer use is among the most imperiled public land in Utah.

As hunters gather in Salt Lake City for this week’s Expo, and as we gawk at the big-game trophies on display there and eagerly plan for hunts, let’s remember the engine that sustains this industry: public land. Let’s commit ourselves to keeping it public. The best way to do that, and to ensure that it is sustainably and responsibly managed, is to keep management of these critical big-game lands under federal oversight where it makes sense and to be very, very careful about the implications of changing that management.

But boycott? Hell, no. The best way to change a system is to work from within. So let’s celebrate our big-game resources this week, but let’s also cherish and support the places where these critters live, and where we get to pursue them.