The 10 Best Gifts to Buy Kayak Anglers This Season

Help your favorite kayak angler get ready for the water with the latest gear. 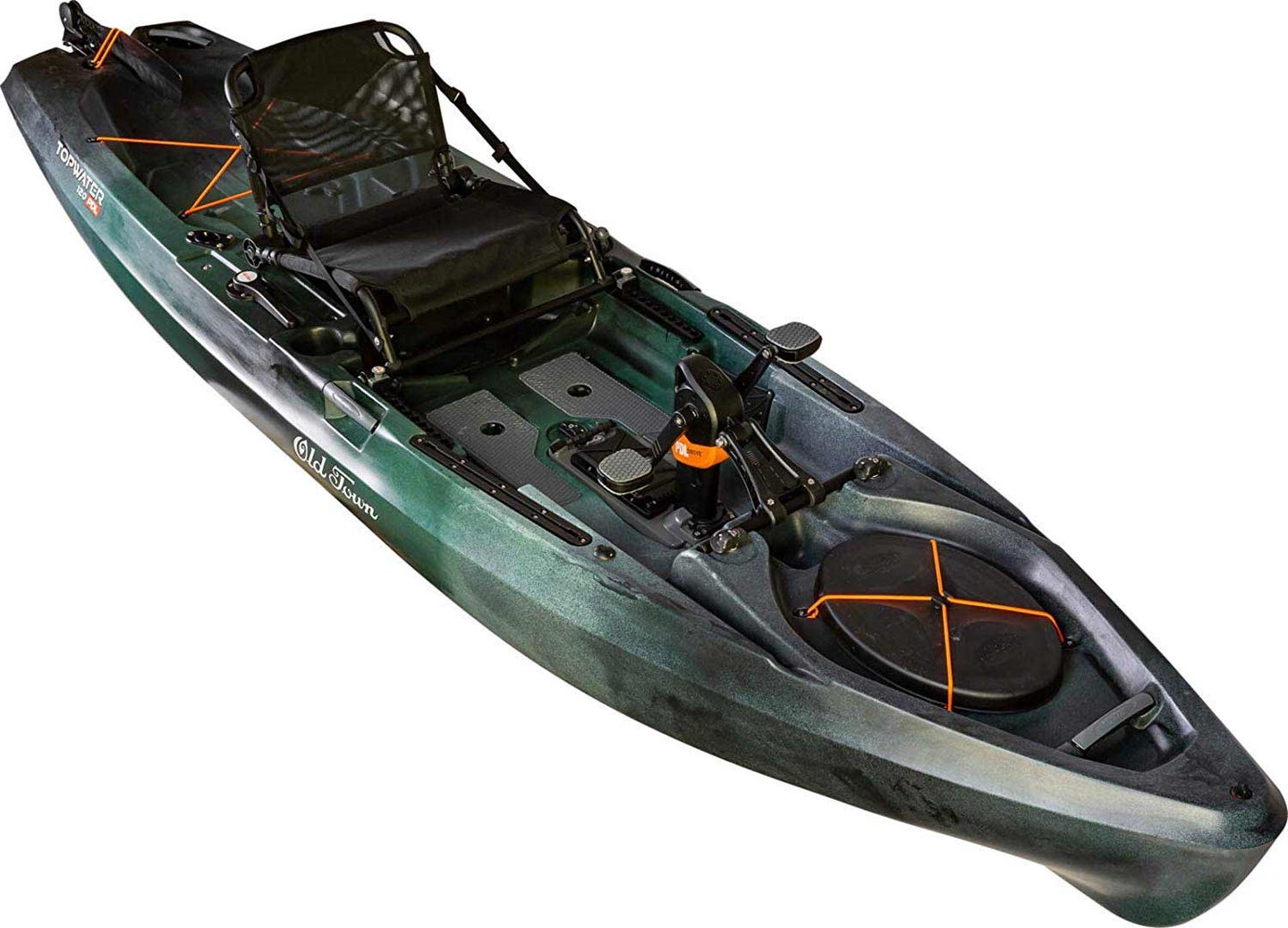 Kayak fishing is more popular than ever. Even bass fishing pros like Mike Iaconelli are fishing from kayaks. Some like the way a fishing kayak makes you fish a spot more thoroughly, while others like how they’re able to sneak closer to fish. But just about everyone that fishes from a kayak just likes the gear and gadgets.

If you’re wondering what you can gift the kayak angler in your life, here’s a short list of the latest kayak fishing gear, new kayaks, safety equipment, and accessories to get them ready for next season.

I test drove the new Topwater 120 PDL this past season, and Old Town has created a dependable kayak that does the job every time. The pedal-drive system is as easy as riding a bicycle and pushes the kayak in either direction, forwards or backwards, to keep you in the sweet spot.

It can cruise against a strong tide and is well balanced, even while standing up and rocking in the wake of a passing powerboat. It has just enough storage space that’s easy to access, like the rear tankwell, front hatch, and inside the pedal drive, but Old Town didn’t go crazy and create hatches everywhere it could. Anytime a friend without a kayak joined me on the water, this is the boat I loan out because I knew it would surprise them. When they wanted to go kayak fishing again, they always made a point to request the Topwater 120 PDL.

No matter what fishing kayak you, or the kayak angler on your list, has in the garage, you always need a little more room on board to mount gear. The YakAttack MightyMount XL is compatible with all YakAttack track-mounted accessories, which can be installed from either end of the mount. These are cheap enough you can buy a few at a time and allow a kayak fisherman to outfit their boat with mounting options everywhere.

When you’re fishing from a kayak, you’ll take any advantage you can get. If you can’t paddle to every spot on the lake, you should cover every spot you can reach as thoroughly as possible. Abu Garcia’s Revo EXD Low Profile Reel is designed to cast as far as possible, which means your lure spends more time in the water. The EXD also features two custom designed ultra-light spools so you can swap out your fishing line on the water to match the conditions.

Every kayak fisherman should wear a PFD (Personal Flotation Device), or life jacket. If someone tells you they don’t need it, buy them one anyway because it might just save their life. A kayak PFD, like Kokatat’s new Leviathan, is specifically designed for anglers, with tons of pockets and gear attachment points. It’s almost like wearing a fishing vest. It’s comfortable enough to forget you’re even wearing it, but you’ll be thankful you are if you’re ever tossed into the drink and have trouble staying topside. There’s no better gift than the gift of safety.

The most common question I get about my gear setup is about my PFD knife. I’ve had it for years and it’s never let me down. I’ve swapped it onto every PFD I wear, because I trust it. The Gerber River Shorty Knife has the blunt tip of a dive knife to keep you safe, but along the edge there are sharp serrations to cut line, rope, or weeds in an emergency. It’s lightweight and durable. The knife also sticks inside the sheath, which I attached to the front of my PFD, without coming loose or falling into the water.

On long, grueling portages, or when your fishing kayak is loaded down with too much gear, it’s nice to have a trustworthy cart handy. I’ve put a few Railblaza Ctug Trolley Carts through some serious abuse (and I mean abuse) and they held out much longer than any other cart I’ve tested. Some anglers prefer a kayak cart that fits through the scupper holes of a boat, securing it without the need for straps, but I like how the Ctug works for any boat. Whether you paddle a sit atop fishing kayak, a tandem canoe, or something in between, this cart can get your vessel to the water and back.

Whether you’re outfitting a fishing kayak for the first time, or rigging up your tenth boat, you need a Fish Grip. This fish handling tool has become standard issue for many kayak anglers, and for good reason. When you don’t want to carry around a big net, but still need to keep a solid hold on your fish to remove hooks or take a photo, a Fish Grip gets the job done. They’re inexpensive and effective, but if you forget to secure one to your kayak, they’re also easy to lose, so I recommend having a backup, or two.

The Power-Pole Micro Anchor is a powerful tool that should be on every kayak angler’s list. It may seem like a small package, but it will secure your boat against strong tides, keep it parked at the launch while you rig up, or stop you quickly when you spot a fish. It works with a small remote that you can keep around your neck or tied to your PFD, which reduces the need to make awkward movements in a craft. The Power-Pole is also one of those gifts that are so good, and “necessary,” that you can buy one for yourself without feeling guilty. At least, you won’t feel guilty after you try it out on the water the first time.

If the first thing a kayak angler buys is their fishing kayak, the second is a way to film themselves on the water. After wrestling with different camera mounts for years, I’ve found the easiest way to film is with The ActionHat DIY Kit. You can turn any hat into a GoPro Mount, the device floats so you don’t need to worry about dropping it into the drink, and it feels comfortable on your head. I don’t think you can say the same for other head mounts.

Now that you or someone you know owns a camera mount, you have to add a camera, right? What better camera than one of the best models from GoPro, the HERO8 Black. The HyperSmooth 2.0 feature takes all the bumpy motion out of your filming. It’s so good it feels like magic. Built-in features like an LCD screen on the back, and mounting points at the base, combined with a new line of accessory mods like lights, make this camera essential for any kayak fishing video creation. It even has 8x slow-motion, which, let’s be real, is the best way to capture scenes of someone landing a fish.