Gas vs. Inertia: Which Semiauto Shotgun is Best? 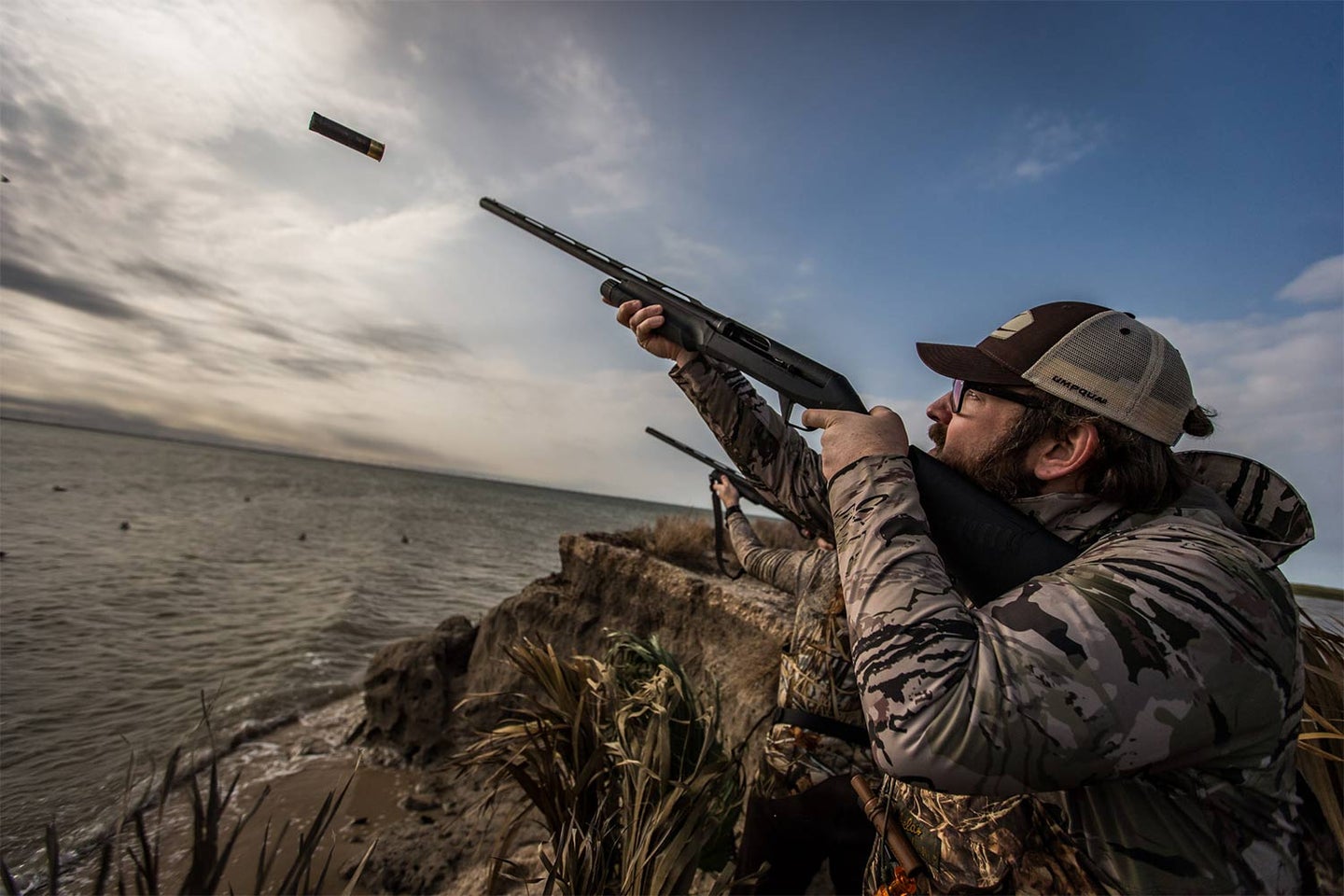 The debate over inertia-driven autoloaders vs. gas-operated semiautos has been going around the shotgun world since the conclusion of World War II. For more than a century, inertia guns have been in the hands of hunters, thanks to John Moses Browning’s Auto-5, and a Danish gunsmith, Christer Sjorgren, who created the inertia system Benelli and other gun manufacturers utilize. Gas-operated guns came about after WWII with the development of the M1 Garand, the battle rifle U.S. troops used in combat. Starting in the 1950s, Browning, Winchester, and Remington all began producing gas guns. The arguments amongst hunters and competition shooters over who did it best—inertia or gas—have swirled around late-night campfires ever since.

First let’s take a look at how each system works. Gas guns bleed off gas near the action from a fired shotshell, which operates the bolt, moving it toward the back of the gun, and ejecting the spent shell. It then returns the bolt forward, loading the next shell. One difference is with the Remington VersaMax and V3, which have a series of gas ports in the actual chamber. The size of the load (2¾-, 3-, or 3½-inch) determines how much gas is bled off. Inertia-driven guns are much simpler. The bolt is held in place by a spring, and when you pull the trigger the charge from the shotshell overwhelms that spring, forcing the bolt backwards, ejecting the spent shell. It then picks up the next load on its way forward.

One system isn’t inherently better than the other, but there are benefits and drawbacks of both. And honestly, you shouldn’t pigeon-hole yourself into shooting gas or inertia. My three favorite modern 12-gauge shotguns are the Beretta A390 Silver Mallard, Winchester SX3, and Benelli Super Black Eagle 2. The first two are gas-operated, and the SBE2 is an inertia gun. I like using the guns for different times of the year and different shoots. The Beretta is for clays, ducks, pheasants, and turkeys. The Benelli is my go-to dark goose gun because it patterns so well beyond the edge of the decoys on fickle/stubborn honkers that don’t like to finish in the kill hole. For spring snow goose season, I wanted an affordable, soft-shooting autoloader, and the SX3 fits that bill.

The name on a shotgun shouldn’t determine whether you buy it or not. You need to think about what you want out of the gun and the game you will be chasing with it. Here are some factors to consider before making your next purchase.

It’s true, you don’t have to clean an inertia gun much, because there simply aren’t many moving parts and it doesn’t bleed off any ”dirty” gases, gumming up the chamber. I strip down the Benelli once a year and give it a cleaning, and it runs just fine all season long. You can’t live by that credo though. I’ve talked to multiple inertia gunsmiths, and most believe that philosophy to be a misnomer. They want you to keep your gun as pristine as possible so it operates flawlessly. And inertia guns almost always cycle heavy game loads properly, which is why the SBE, Franchi Affinity, and Auto-5 (now A5) are so popular with hunters—they are reliable.

The one drawback of a recoil-operated gun is you need to have it mounted properly to your shoulder in order for it to cycle. I don’t like shooting them out of layout blinds when it’s bitter cold for that reason. Much of my duck hunting at home is done on dry ground late-season. When I sit up to shoot, sometimes the stock isn’t firmly pressed against the shoulder. That, coupled with cold (which will stiffen the bolt, making it harder to open and close) can cause shells to hang up in the action. It can happen in the uplands too. When birds flush, you don’t always take the time to get a proper mount. The gun doesn’t have enough to recoil against, so the bolt won’t run properly. If you need a second shot to dispatch a flushing ringneck, you may just watch it fly away.

Well-made gas guns only hang up if they are dirty (or broken), so keep them clean and they will work properly. The one caveat to this is 3.5” shotshells. There have been multiple times I’ve had an issue with the cycling of this particular load in gas guns. It hasn’t been with just one model or brand, though Beretta’s A400 Extreme was one of the more recent guns to have serious problems running 3.5s and even some high-velocity 3-inch shells. I haven’t encountered the same hiccup with the newer A400 Plus, and have been shooting an A400 20-gauge for a few years and it has never hung up. In truth, you don’t really need to shoot a 3.5” shell in most hunting scenarios, but if you buy a gun that is chambered for a 3.5” load, it should cycle it reliably. Gas autos don’t always do that.

That said, if you enjoy shooting clays and smaller game with 2¾” loads, a gas gun is the way to go. It typically takes longer to “break in” an inertia-driven gun so that it will cycle lighter shells (like a 1- or 7/8-ounce target load). And some inertia guns won’t ever cycle lighter shotshells, which will make it damn difficult to shoot a double on the skeet field. That also comes into play when you need a second round on a rabbit or dove. For these scenarios you’ll want a shotgun that will consistently cycle lighter ammo, and gas-operated semiautos are your best bet.

I’ve also found gas guns run a bit better in extremely cold weather. It’s not that inertia guns don’t shoot in frigid temps, but they need recoil to operate, and that recoil is buffered when you are wearing bulky layers. Big, puffy parkas separate your shoulder from the buttstock, which the gun needs to cycle the shell. Couple that with single-digit temps, and it can cause problems. I’m not saying Benellis, Franchis, or Stoegers don’t shoot in the cold, because my SBE2 has been pretty reliable. But when it’s late-season and I’m dressed like an Eskimo, a clean gas gun is what I bring with me.

A lot of folks think inertia guns are shoulder killers. And some will give you a wallop, but I have also shot a few 20-gauge gas guns that kicked harder than inertia 12s. Also, just a disclaimer: I don’t mind recoil as much as others might. When you are big and tall, there’s more of you to soak it up, and since I fall in the big-and-tall category, it has never been much of an issue. But I know many wingshooters have an aversion to it, and rightly so.

There are few modern inertia-driven shotguns that have unmanageable recoil. Yes, they are going to pound you harder than most gas guns, and if you shoot a 2-ounce 3.5” turkey load out of an A5, it might well rattle your bones. If you hunt and shoot a lot, and you’re an old or smaller shooter, a gas gun might be for you. Two to three months straight of shooting is a lot for one shoulder to bear, and a gas-operated auto will soften some of the felt recoil.

The reason I have an SX3 is almost strictly for snow goose season. When I got it, I was chasing white geese pretty steadily each spring. The A390 Silver Mallard is a pain in the ass to take the plug out of (there are no three-shell limits for the spring conservation season). I also wanted a gun that fed five to 10 shells reliably every time, and I didn’t always get that with a Benelli. I doubt it was the gun’s fault. It was likely a mix of an especially dirty SBE2 and poor shoulder mounting by me. For high-volume shooting, a clean gas gun is the way to go. You can trust it to cycle, and it also doesn’t have the recoil of an inertia gun, which is why any of the Winchester Super X guns are good for this. If you rarely shoot big numbers of birds (or clays) you won’t need a gas gun. If you are a die-hard snow goose hunter, preserve upland hunter, and/or love shooting skeet in the offseason, it will serve you well to buy a gas-operated auto.

One of the softest recoil systems is Beretta’s Kick-Off. You can shoot three 3” shells in a row and barely feel a thing. It’s like firing a pop gun. I’ve seen people of all shapes, sizes, and ages shoot an A400 with this technology and never heard one complain. If you have a severe aversion to recoil, it’s a smart buy, just be ready to spend.

This is a pretty subjective question. I don’t think the longevity of a gun has as much to do with inertia or gas as it does with the quality of the gunmaker. I’ve shot all kinds of modern autoloaders, and the ones that break down or don’t cycle shells reliably are usually cheap, Turkish-made inertia guns. But many inertia autos have iconic status because of their legendary durability, like Browning’s Belgian-made Auto-5 and the Benelli H&K. So my advice is don’t cheap out. Buy once, cry once, as they say.

The same applies for gas-operated semiautos, although inexpensive versions aren’t available on the same scale their inertia counterparts are, probably because it’s more difficult to mass produce gas guns as cheaply. I don’t hear too many folks complaining about the longevity of Italian- or American-made gas guns. Sure, there have been issues with some gas autos, but there will always be malfunctions with anything mechanical. There aren’t many A400s, Winchester’s SX line, Browning’s Maxus, or Remington’s VersaMax being discarded because they have been unreliable.

Does One Gun Shoot Better Than The Other?

The fit and feel of a gun is what most shooters consider the determining factor when it comes to shotgun accuracy. Some guns feel good in the hand right out of the box, but that doesn’t necessarily mean they swing well when shouldered. I like the feel of an inertia-driven gun over a gas gun. Inertia guns typically have a more slender forearm; gas guns almost always have a “fat” forearm. But I shoot gas guns better. The reason? I think it’s because there tends to be more weight toward the front of the gun, and it keeps me driving through the target. Inertia guns are usually lighter, but even if they are the same weight, it always feels more evenly distributed throughout the entire gun (at least to me).

Some shooters like the balance of an inertia gun—how it is more “whippy” or maneuverable than a gas gun. I don’t. I may hate the “fat” feel the gas gun forearm has, but love the way I shoot them. Gas guns are more of a pain in the ass to lug around, but if I know it’s going to be a challenging day of shooting in the field, or I’m headed to the skeet range, a gas gun is typically in-tow. It’s different for every shooter, but I will caution you: out of the box, an inertia gun is likely to be more appealing. It’s sleek and sporty. It may very well be the best handling gun you have ever shot. But shoot it first. Because even though gas guns feel more like shouldering a boat anchor, they have more weight forward, and that keeps the barrel in front of whatever flying or running quarry you are hunting.