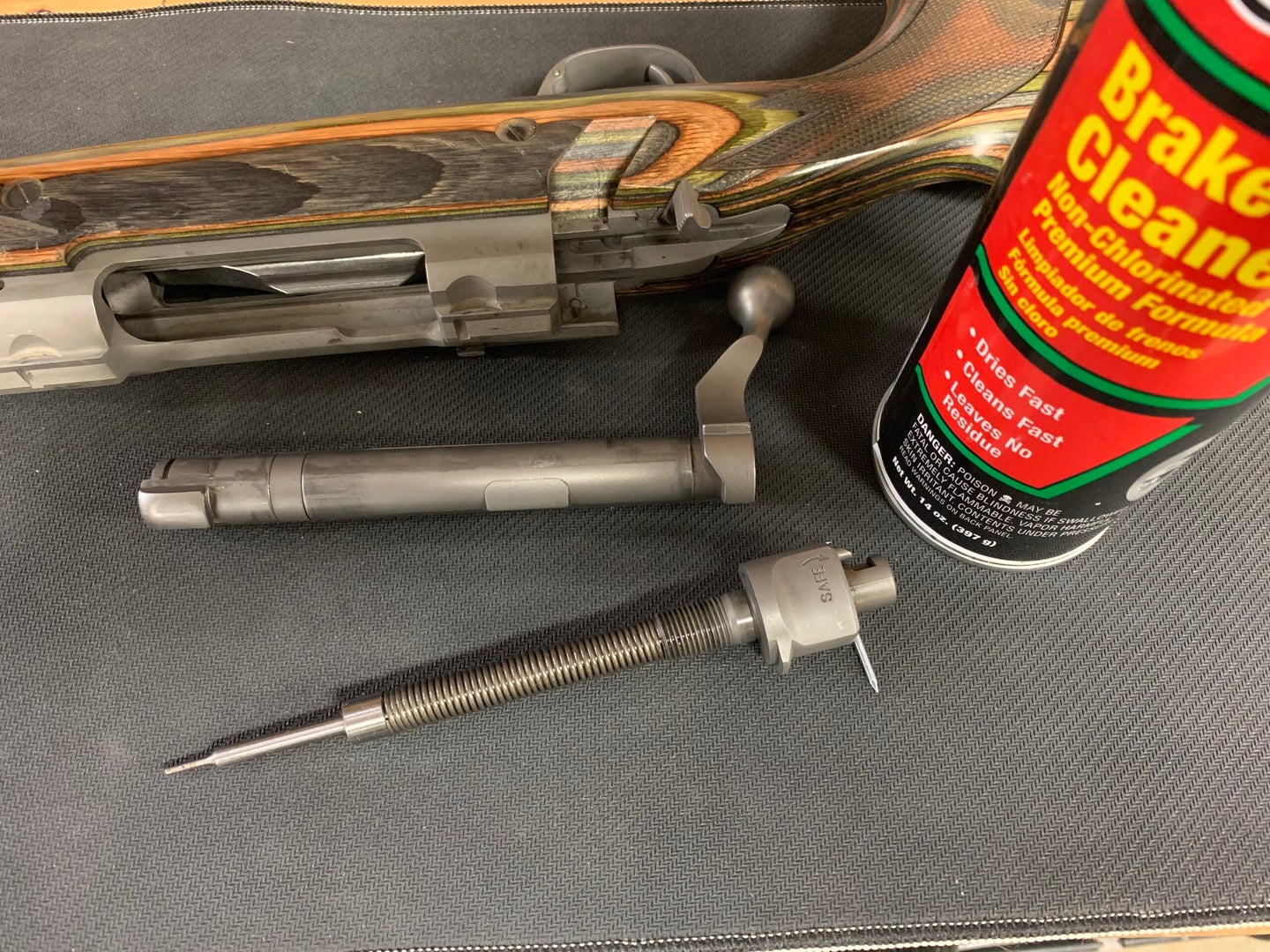 Wipe down your bolt and spray it with brake cleaner to ensure it runs properly in the cold. Tyler Freel
SHARE

With advancements in coatings and corrosion-resistant components, our hunting rifles are better-equipped now more than ever to hold up in foul conditions. But there are still steps you need to take to keep a bolt gun or semiauto working reliably, particularly in cold weather. Modern rifles often require a little less TLC, but being subjected to the abuse—moisture, saltwater, and other natural contaminants—that come with hunting inclement conditions can plant the seeds for problems down the road.

We lubricate our guns after the hunt to prevent corrosion, and keep them in good working order. But in extreme cold, that gun oil can turn to syrup and cause your rifle to malfunction.

There’s no exact temperature that can cause a “wet” rifle to gum up, but many hunters venturing out in below-freezing or subzero temps have run into a myriad of rifle issues. The most common is a misfire, or a soft firing pin strike when the trigger is pulled. Even from the factory, the firing pin and firing pin spring are typically coated in a healthy dose of oil, and accumulate more as a shooter oils and cleans the rifle.

As the temperature drops, this oil becomes thicker and stickier. Rather than lubricate as intended, the cold can cause the oil to impede the firing pin, slowing it down to the point that it sometimes won’t ignite the primer. Any dust or fouling that has accumulated around the firing pin and spring can make matters worse. I learned this the hard way hunting coyotes as a kid with a dirty, oily 10/22, losing several coyotes because I was cycling the bolt furiously trying to get one of the cartridges to go off.

Every year on a local winter caribou hunt here in Alaska, I hear of rifles misfiring, bolts that feel like they’re stuck in molasses, magazine catches that won’t engage, and other similar issues. I’ve even heard of a hunter who had his rifle fail to fire, opened the bolt, and pulled it completely free of the rifle while trying to chamber another round. Apparently, the bolt release had been accidentally depressed, and it had enough viscous oil in the mechanism to prevent the spring from returning it to its correct position.

For the most part, a thoroughly-lubricated rifle—under normal conditions—means a properly-functioning, corrosion-resistant, dependable gun. In the cold, too much, or the wrong type of lubricant will prevent your rifle from firing. Many oils become incredibly viscous and thick when they get cold, and if carbon fouling is present, it will be even worse.

One of the most vital parts of gearing up for hunting in cold weather is degreasing your rifle, especially the firing pin and spring. The easiest way I’ve found to do this is to disassemble the bolt as far down as possible (or your manufacturer recommends). Strip the bolt, firing pin, and firing pin channel of any oil. Then, liberally spray your parts and components with brake cleaner or electrical parts cleaner/degreaser. This will remove the oil and gunk and leave you with a dry rifle.

For bolt-action rifles, and some semiautos, your best bet is to re-assemble them, and run them totally dry with no oil while hunting in cold weather. You still need to take care of them and apply the appropriate lubrication the rest of the year. But in the bitter cold, it won’t hurt the rifle to be used without oil for short periods of time. For bolt-action rifles, it’s a no-brainer. And even most ARs will function reliably without lubrication for a surprising number of rounds. For most hunting applications, you won’t have any noticeable increase in wear and tear.

Some Modern Sporting Rifles, and other semiautos may not cycle reliably completely dry. If you find it absolutely necessary to give them some lubrication, experiment to see what works best. Some lubricant’s like Shooter’s Choice FP-10 function well in very cold temperatures, and even some synthetic fishing reel lubricants can stay very slippery in the cold.