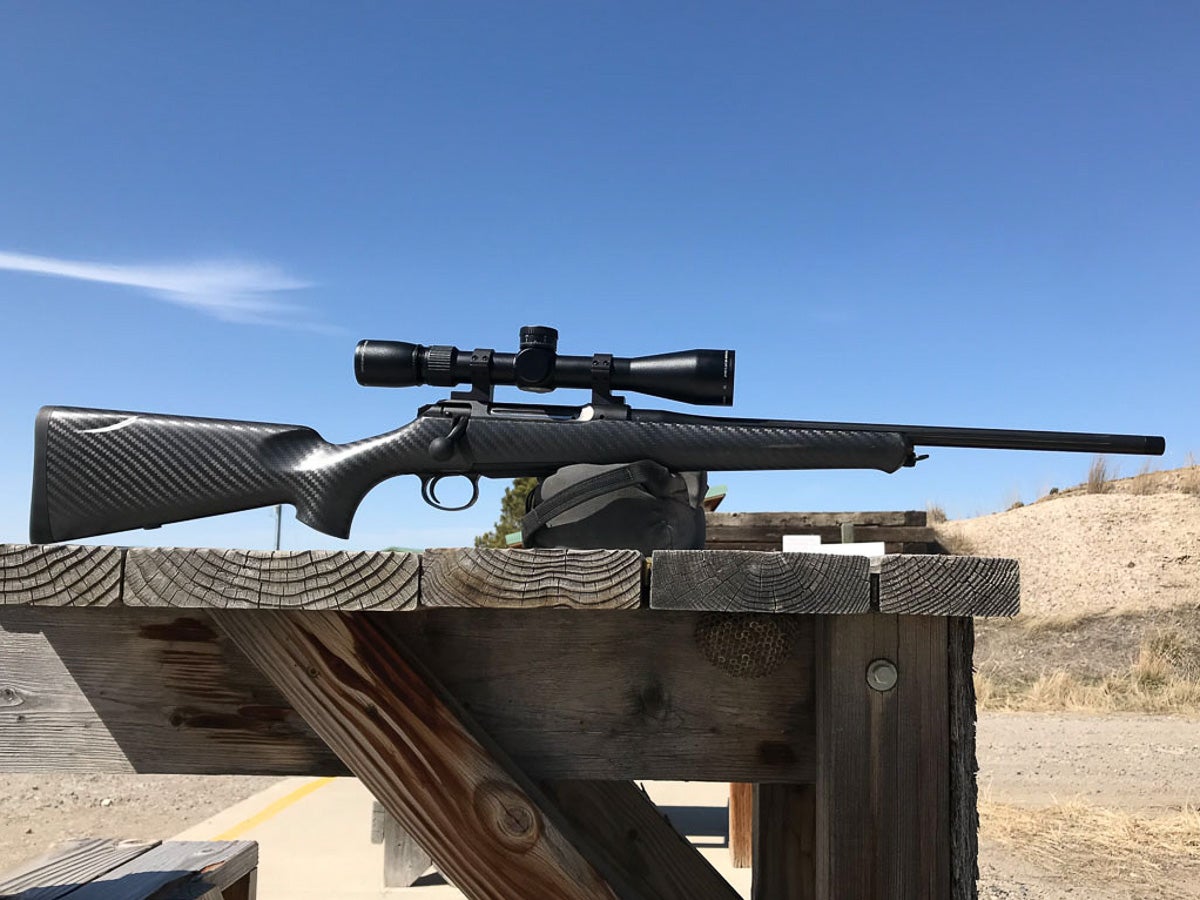 The Sauer 101 Highland XTC is a trim mountain rifle. John B. Snow
SHARE

The Sauer 101 Highland XTC, also known as the Sauer 101 Carbon, is an unapologetically European rifle. It exhibits the benefits and quirks of its German origin and I’m willing to bet it gathers a devoted following here in the U.S. as hunters learn about it.

Comparing European rifles to European cars is a bit cliché, but the analogy certainly has merit in this case. This latest version of the Sauer 101 is not unlike a high-end Audi—refined, capable, spendy, not for everybody, and blessed with drop-dead good looks.

Visually the Sauer 101 Highland makes a strong impact. The hand-laid carbon fiber stock combined with the stock’s geometry—straight comb, graceful Schnabel fore-end, subtle reverse contouring on the butt behind the cheek rest—gives the rifle a sleek and elegant look. The grip cap angles at a rakish slant, extending the curve of the grip and giving the shooter’s trigger hand ample real estate to hold on to. The sweep of the grip’s lines also contributes to the rifle’s jaunty appearance. The grip also has a moderate swell on either side, which made the rifle very comfortable in-hand. I’ve always been a fan of a trim Schnabel fore-end so from the get-go this rifle called to me.

In the case of the Highland XTC, sleek also translates to slick. While the stock geometry helps promote a solid grip, the smooth carbon-fiber finish does not. I didn’t have any issues with the gun sliding around in my hands while shooting, but I was conscious that the stock didn’t have any texture or checkering every time I pulled the trigger. I just made sure to hold on with an extra firm grip.

The metal work is equally high-tech. The barrel and receiver have a DLC (diamond like coating) finish that is tough as overcooked venison, providing excellent protection against corrosion and wear. DLC also adds lubricity to the metal, which is one of the reasons the action cycles so smoothly. Another aesthetic element on the metal work is the fluting cut into the barrel. The grooves are sharp and well-defined, and though not deep they trim a bit of weight from the rifle.

Weight is a central concern of the Highland XTC. This rifle is the lightest ever made by Sauer. Empty, mine weighed 5 pounds, 9 ounces. That was with the included QD swivel studs clipped into the stock. For an optic, I mounted a Vortex Razor HD LHT 3-15×42 in Talley Lightweight Alloy Scope Mounts. All in, the rifle weighed 6 pounds 15 ounces, which by my lights is an excellent weight for a hunting rifle that carries an optic with a versatile magnification range that can be dialed for longer shots.

The stock is responsible for a lot of the Highland’s weight savings. It is a feathery 1 pound 3 ounces yet is stiff and strong. I already discussed the lack of texture on the stock, but one other ding is the loud (and hollow sounding) noise the stock makes when struck. It would be nice for it to have some type of fill that deadened the sound without adding a more weight.

The action uses a 6-lug bolt design with two stacked rows of three lugs each. As you probably know, a three-lug pattern gives the shooter a shorter bolt lift when running the rifle. In theory, this more compact throw (60 to 70 degrees, typically, versus the 90-degree throw of a two-lug bolt) makes for a speedier rifle. That’s assuming the effort required to lift the bolt isn’t so great that this advantage is negated. This can happen because the bolt is trying to cock the firing pin with the shorter throw, meaning all things equal, a three-lug system will require more force to run. In the case of the Sauer 101s, the bolt cocks easily and the rifle runs well from the shoulder.

A hallmark of all Sauer rifles is smooth bolt travel. The outer diameter of the bolt body is just a hair smaller than the interior diameter of the raceway in the receiver, so the bolt glides back and forth with no chatter or binding, even when lateral pressure is applied to the bolt handle. There’s a feeling of assurance when running the Sauer as there’s no way to realistically mess it up.

To cope with mud, snow, ice, or grit that might accumulate in the action, the bolt has five flutes machined along its length in addition to the groove in the bottom of the bolt that serves as a channel for the bolt stop.

The bolt stop is actuated by a small button just behind the bolt handle. Sauer cleverly incorporated the bolt stop into the safety mechanism, which I’ll get to in a second. When the rifle is on safe, the bolt stop prevents the bolt from rotating, locking it in place. But depressing the bolt stop button disengages the stop from the channel so the shooter can remove a round or inspect the chamber without placing the rifle on fire. You also can hold the button down to free the bolt from the action. It’s a smart system.

The safety is a lever mounted on the bolt shroud that slides forward (for fire) and back (for safe). To push the safety forward, the shooter needs to depress a small button located in the center of the slide. I found this system worked well for the most part, though I did have difficulties from time to time disengaging the safety when snap-shooting offhand at the range. The button is smooth and could use some checkering to help the thumb gain a more positive purchase.

The lugs on the bolt engage with recesses in the barrel—a design more commonly found on European rifles. On American rifles the lugs typically engage in recesses in the receiver. From a safety standpoint the European design has the benefit of containing case failure within both the barrel and the receiver. You can tell the Germans who engineered the action took the potential of a catastrophic failure seriously by the size of the two ports they drilled into either side of the receiver and chamber to vent gas as well.

The head of the bolt has dual plunger ejectors that bracket the Sako-style extractor. The ejectors do a great job of kicking empties clear of the chamber. They toss the brass with authority and never failed to function during my evaluation.

When the bolt runs up and down the receiver, one of the three lugs is in 6 o’clock position. That lug engages the cartridge at the top of the magazine pushing it into the chamber. The magazine is a detachable box made of polymer that doesn’t weigh much but is extremely sturdy. The double-stack design holds five rounds of standard sized cartridges, like the .308 Winchester I tested. In the magnum chamberings the magazine holds four rounds.

As you’d expect on a $3,000 rifle, the rifle also chambers single rounds flawlessly. During my evaluation the rifle never exhibited any glitches with loading, feeding, extraction, cycling or ejection.

The sporter-weight barrel is cold-hammer forged, and for all the Internet chit-chat about the superiority of cut-rifled barrels, the truth is there are many excellent barrels out there that are constructed from cold-hammer forging. And the barrel on the Sauer 101 Highland XTC is one of them.

During the accuracy testing of the Highland, I put several premium hunting loads through the rifle as well as a couple match .308 loads. The rifle shot everything well. The 5-shot averages with the match loads (Federal 175-grain Gold Medal BTHP and Norma 168-grain BTHP) was .7205 inches and the hunting loads averaged .968 inches across 5-shot groups with Nosler 165-grain Accubonds, Black Hills 168-grain Tipped Matchkings, and Hornady 178-grain ELD-Xs. This is excellent performance for a mountain rifle.

While the barrel comes threaded with a thread protector, it is worth noting that the pitch on the threading is M15x1, so you’ll have to dig around a bit to find muzzle devices that are compatible.

The barrel isn’t the only component contributing to the Highland’s stellar accuracy. The trigger on the rifle is a joy. The crisp single-stage design has no perceptible take-up and not a hint of creep. Sauer says the trigger has a 2-pound break. I measured mine at 2 pounds 4 ounces with my Lyman digital trigger scale. Every measurement was either 2 pounds 4 ounces or 2 pounds 3 ounces—the type of consistency you expect from quality competition triggers.

The rifle’s bedding also deserves mention. In addition to the two standard action screws that secure the receiver to the stock, Sauer has added a third fastener. This fastener is located at the front of the action and is actually what the front action screw screws into. It clamps the action to a metal bedding block that is embedded in the stock with epoxy. In lieu of a traditional recoil lug, the block has a recesses for two pins that protrude from the underside of the barrel. (See photo.) That third fastener, which is the primary fastener on the rifle, creates a solid lock-up between the stock and action. Short of a professional bedding job, this system is a good as you’ll find.

A couple final notes on the rifle. The recoil pad is what I’d deem semi-stiff—not overly squishy, but with enough give to help the rifle mitigate recoil so that shooting the .308 isn’t unpleasant in the least. It provides plenty of grip to keep the stock in place on the shoulder but isn’t so tacky that it wants to hang up on clothing preventing a smooth mount.

The rifle ships with two sling attachments, both of which snap into QD cups. One is located on the tip of the fore-end and is in line with the barrel, while the other is at the normal place on the underside of the stock. It is a great benefit to be able to remove the sling attachments so that you can shoot off bags without having a swivel stud catch on anything. I hope more rifle makers embrace this trend.

The overall impression the rifle gives is one of rugged construction, unflinching reliability and elegant European design. It also has confidence-inspiring accuracy. This German-engineered gem is exactly what you’d want on your shoulder when climbing into unforgiving terrain with the trophy of a lifetime on the line.