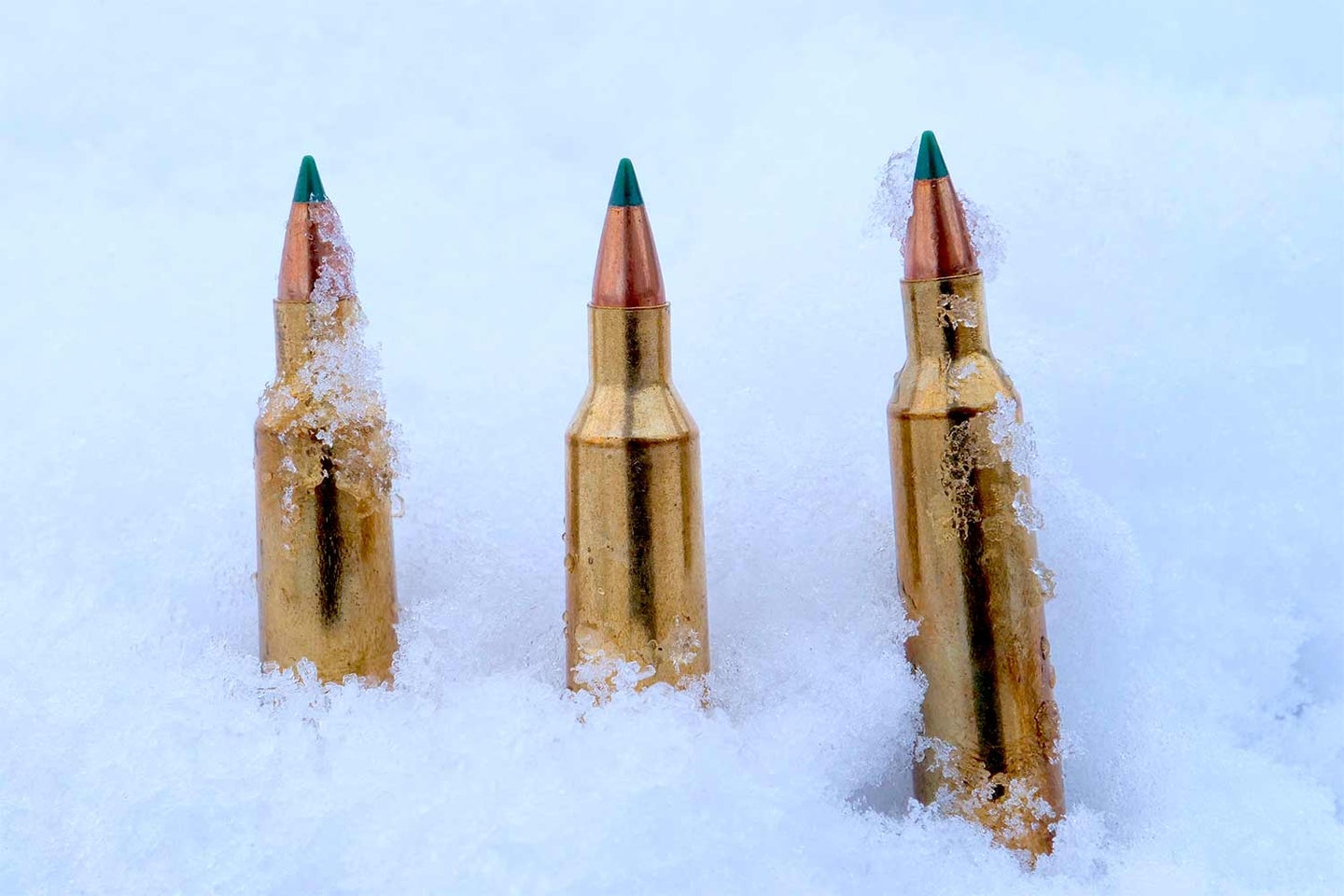 Cold weather is a good news/bad news situation for hunters. Depending on what, where, when, and how you shoot, you might need to worry about cold — or forget about it. Let’s tackle the bad news first.

Bottom line: cold slows down your bullets. It increases bullet drop. It increases wind deflection. It reduces energy delivered on target. Heck, cold temperatures can even prevent guns from firing.

Consider this scenario: you are dressed head-to-toe in your best snow camo. You have your .22-250 Rem. coyote rifle taped white and stuffed to the gills with the hot 55-grain poly-tipped boattail spire point handloads you concocted last summer. Your carefully chronographed measurements showed average muzzle velocity (MV) as 3,700 fps. You’ve got your drop and drift chart memorized and know just which sub-reticle to hold for 300, 350, 400, and 450 yards.

So let the hunt begin. You sit against a fence post in a miserable, 10 mph left-right crosswind at 0-degrees F, thankful that you’ve worn four layers of hydrophobic fleece, Merino wool, and the finest goose down plus a wind blocking layer of Gore-Tex. You blow your open reed call eagerly for 30 seconds, wait three minutes and repeat. After 15 minutes, your first customer appears. Instead of charging in, the big dog stops facing you at a laser ranged 400 yards. OK. That’s a pretty narrow target. But you have a steady bipod rest and you know your drop and drift numbers. You’re a precision shooter. You steady your 400-yard reticle and kiss the 2# Timney trigger. Click. Failure to launch. Stay calm. Bolt in another round and worry about the mis-fire later. Shot number two ignites and the 55-grain projectile is away. In less than a half second it lands. Just right of the coyote and slightly low!

What happened? Cold. Your misfire was likely due to a gummed up firing pin slowed by the clod. Keeping your rifle clean and clear of gummy oils should fix that issue.

But Why Did You Miss?

The miss happened because you chronographed the load in August at 90-degrees F. But you’ve just launched it in January at 0-degrees F. Just as cold slows syrup and motor oil, it slows bullets. Cold makes air more dense. It’s hard for us to appreciate this because we’re immersed in air all our lives, but it actually has a measurable weight. A cubic foot of atmosphere at standard temperature (59-degrees F.) and pressure (29.92 hg) weighs 0.0807 pounds. And every fraction of an ounce of that creates drag on projectiles, slowing them down. How much? Well, that depends…

Obviously, we’ve just seen that drag increases with air density. You can offset this with an efficient bullet shape, but that is a given in the loads you’re shooting. In other words, your 55-grain bullet doesn’t change shape with cold. Only air density changes. So it doesn’t matter what bullet you’re shooting or what your trajectory curve looks like — it’s going to suffer from colder temperatures. (All the more reason to load the highest B.C. bullets you can.)

The big question, of course, is how much does this cold induced air density hurt you? Well, a quick ballistic trajectory calculation will show us that. Let’s study two tables, both shooting the same load with the same zero and same muzzle velocity (MV). The only difference will be atmospheric temperatures, 90-degrees F. vs. 0-degrees F.

Here’s our first bit of good news. Look at the elevation column in inches. At 200 yards our cold-induced drop increases just 0.12 inches. Not enough to worry our pretty little heads over. At 300 yards — a pretty good poke for most of us — our frozen bullet drops just 0.28” more than our hot one.

Still nothing to worry about. But at 400 yards our additional icy drag results in 1.5 inches more drop. Still not drastic, but combine that with the inevitable poorer precision of a 400-yard shot and you’re liable to miss. Our good news would appear to be over. And there’s more bad news on the way… Greater wind deflection.

Wind effects on bullet flight are always more problematic than drop since wind isn’t constant. Add in the longer flight time that results from denser air and your bullet’s deflection increases. Check the Windage columns fourth right from the Range column. These numbers are bullet deflection in inches. At 0-degrees F. our little bullet suffers nearly 4 more inches of wind deflection than it does at 90-degrees F. Ouch!

Baby Come and Light My Fire

You would think that the incredible heat generated by a given quantity of gunpowder would produce a given gas pressure to shove a given bullet from a given length of barrel at a given MV. But, despite all those givens, that’s not a given! Gunpowder, like paper, wood, and hair ignites at a given initial temperature. Paper’s ignition temperature is 451-degrees F. Smokeless gunpowder ignites at about 320-degrees F. But…

Believe it or not, cold makes gun powder harder to ignite. And once it does flame, it doesn’t burn as hot nor produce as much pressure as it does at a higher ambient temperature. For every 1-degree F. drop in temperature we can expect about a 1- to 1.5-fps drop in velocity due to lower propellant temperature. Our 3,700 fps load above would drop to about 3,572 fps at 0-degrees F. Combine that lower MV with the denser air at 0-degrees and trajectory really starts to suffer, as this final table shows.

Now we’re really feeling the effects of the cold. At 400 yards our drop increases by 2.5 inches compared to our 90-degree trajectory. Worse yet, wind deflection widens by almost 5”. Of course, as range increases, both of these increase, too. Fortunately, we have more good news to offset this!

Hunters who shoot factory ammunition should conduct similar research. Not all or even many ammo makers advertise the powders they use, but some are beginning to least least specify “less temperature sensitive” powders in some of their loads. Regardless, a wise shooter will verify this by chronographing or drop testing loads in wildly different temperatures. To drop test, merely measure bullet drop below your point-of-aim at varying distance, i.e. 300 yards and 400 yards — farther if you anticipate engaging targets at longer ranges. If your bullets drop significantly more in extreme cold than they do in summer heat, they’re likely propelled by a temperature sensitive powder. But that doesn’t mean they’re no good…

To use any temperature sensitive load effectively in extreme cold without a chronograph measurement of MV, merely determine drops at those temperatures and use this trajectory information when compensating for distant shots. An on-line ballistic calculator or phone app like Ballistic can spit out drop and drift charts for you quickly.

Perhaps the best news of all is that you rarely need to shoot beyond 300 yards when winter predator hunting. Coyotes, foxes, and bobcats responding to predator calls usually approach within at least 200 yards and, as experienced callers will attest, often inside spitting distance. Then cold induced trajectory differences mean nothing!

Before you worry too much about cold temperatures screwing up your shooting, make an accurate assessment of how often you actually hunt in serious cold. Many of us imagine we’re Numb Butt of the North when we’re really freaking out over a reasonable winter day in the teens. You have to hunt places like South Dakota and Montana north into Canada and Alaska to really enjoy some serious cold.

Second, determine how often you shoot late winter game beyond 200 or 300 yards. Don’t get your Long Johns in a wad until shots extend past 300 yards.

Read Next: How a Ballistician Determines and Applies BCs for Bullets

Third, shoot a high velocity, high B.C. bullet to begin with. This always minimizes drop and drift at all temperatures.

Fourth, test your loads for drops and drifts at anticipated hunting temperatures. If you can’t replicate them, freeze your ammo overnight, keep them in a cooler with ice until you reach the range, and shoot quickly after chambering. That won’t show the effects of thicker, cold air, but will at least show the differences in powder burning effects.

Finally, memorize your drops and drifts based either on a good ballistic calculator or actual field testing under true hunting conditions.