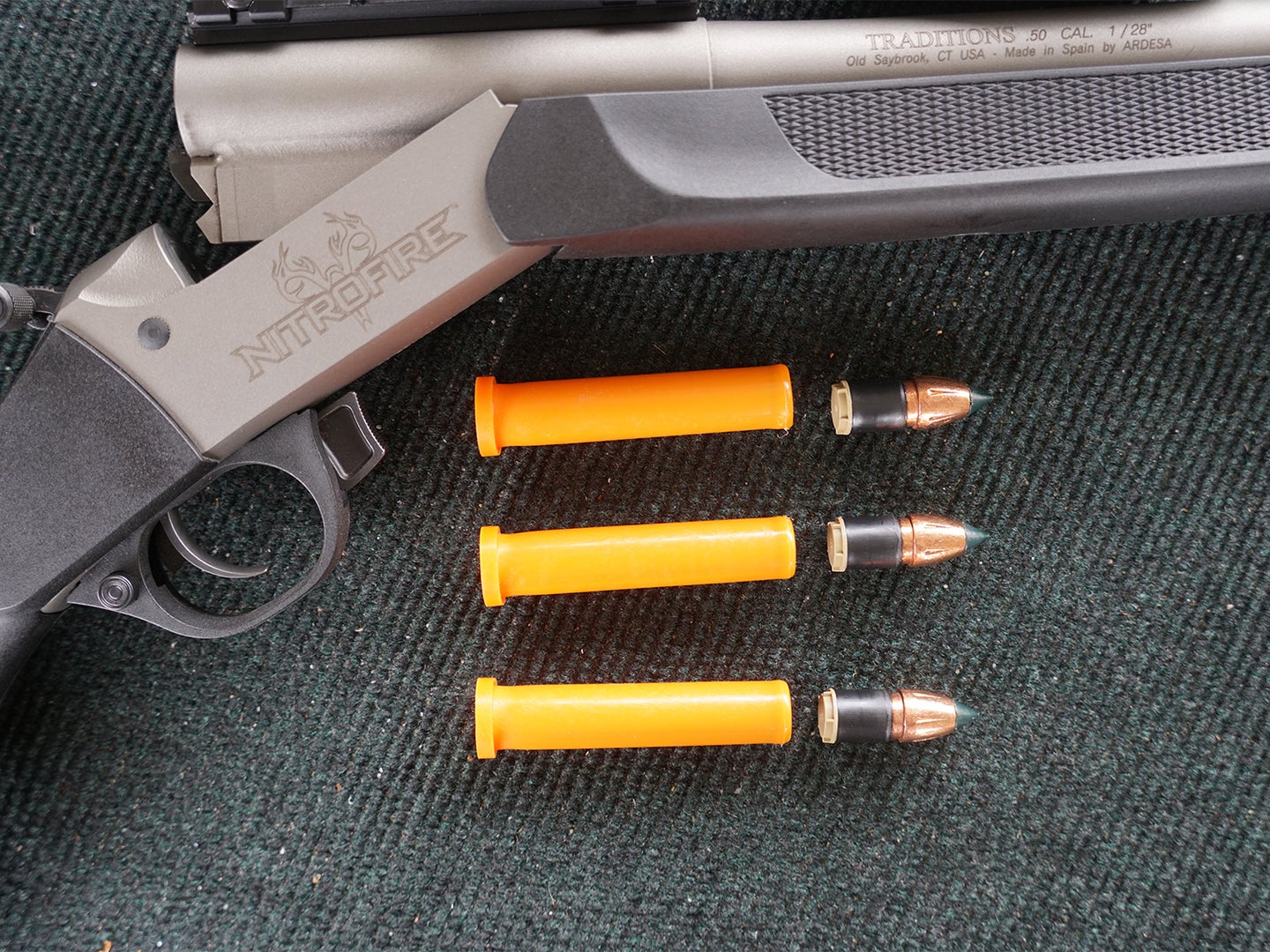 The technological advancement that’s going to open muzzleloader hunting up to a whole wave of new people is a polyethylene capsule that’s filled with black powder. So … not exactly space-age technology. While the product itself might not be super advanced tech, the idea behind it is pretty brilliant.

One of the great pains of shooting a muzzleloader is loading it (usually measuring out powder charges) and then cleaning it after every other shot (or sometimes with every shot). For newbies, this process is not only a pain in the neck, it can also be really intimidating. If you don’t add the right amount of powder or seat the bullet properly … bad things can happen.

Federal has solved those problems with the FireStick, which is a capsule that comes pre-loaded with either 100 grains or 120 grains of Hodgdon Triple 8 powder. The FireStick pairs specifically with a new Traditions Nitrofire muzzleloader. Here’s how the system works. First you load a .50 cal muzzleloader bullet through the muzzle of the rifle. Then, you break open the gun and load the FireStick through the specially designed breech of the muzzleloader and then press a standard 209 primer into the FireStick’s primer pocket. Snap the gun closed and you’re ready to shoot. You can see the process in more detail in the video below.

The fact that this is way easier than loading a regular inline muzzleloader is obvious. But, there are a few more nuanced advantages to this system, too. First, it’s really easy to unload. Simply pull the FireStick out when you’re done hunting and leave the bullet seated.

Another huge benefit of the system is that your powder is protected from the elements. The FireStick is sealed on both ends. In testing, Federal engineers submerged it underwater for up to four hours and then fired it with very little change in ballistics. They also tested it in negative 20 degree temps and high-humidity conditions without seeing detrimental changes in muzzle velocity.

Lastly, the FireStick system is way cleaner than standard inline muzzleloaders. I got the chance to shoot it at a range day with Federal engineers (more on this in a minute) and we shot 10 rounds before cleaning the barrel—one fouling shot and then three, three-shot groups. There was no decline in accuracy and it didn’t become impossible to push the bullets down the barrel. The system is cleaner because the powder is igniting inside the capsule, there’s no powder touching the barrel directly. Also, because of the bullet shelf design, that crud ring or powder ring doesn’t develop the way it would in standard muzzleloaders. Lastly, there’s no breech plug to pull out and soak.

I was shooting a pre-production rifle at the range day with Federal engineers (production models will be ready before fall) so it’s too early to make a final statement on the system’s accuracy. That said, you should expect to see slightly above-average accuracy from the FireStick and the Nitrofire rifle. At 100 yards, I was shooting about two-inch average groups with Federal’s 270-grain Bor Lock Trophy Copper bullets and 1.6-inch average groups with Smackdown Carnivore 305-grain bullets. My best group was 1.09 inches. This is not game-changing accuracy. As you can see when compared to our muzzleloader test a few years ago, this is on par with how the better bullet/powder/rifle combinations perform. In broader testing, the Federal guys were getting average groups from 3 inches to about 1.6 inches from a wide sampling of name-brand muzzleloader bullets (the system works with all name-brand bullets).

Federal also shared some of its early velocity testing data with me, proving that consistent muzzle velocities were helping with better accuracy. With the Traditions Smackdown Carnivore 250-grain bullet, testing showed a variance of 44 fps and with Federal Premium B.O.R. Lock MZ Trophy Copper 270-grain bullet there was a variance of 37 fps. The muzzleloader industry standard of muzzle velocity variance is 75 fps, according to Federal. In other words, since there is a consistent amount of powder loaded into each capsule, FireStick is turning out very consistent muzzle velocities which in turn helps with accuracy.

But other than that, there’s nothing about this system that makes it inherently more accurate than standard muzzleloaders. This is not long-range muzzleloading technology that’s turning out ultra-fast velocities (the mean velocities were 1,973 fps for Carnivore and 1,957 fps for BOR Lock).

Should It Be Legal?

So should this product be allowed in regular muzzleloader seasons? Many game agencies answer loudly and clearly—yes. These agencies see it as a way to bring more hunters in to muzzleloading with a safe product that’s easy to use.

“The muzzleloader season is important for mentored hunts because oftentimes the states have more liberal seasons, so you get multiple weekends,” says Jon Zinnel, the Conservation & Youth Shooting Sports Program Manager for Federal. Besides that, it’s often easier to get mentors on board for a muzzleloader season because they’ve already been able to hunt for themselves during the archery season and the regular gun season.

“When you look at where we are as a hunting society, the most important thing is that we get the next generation of new hunters engaged, and oftentimes innovation and technology is what helps bring some of those people to the table,” Zinnel says.

There is real potential here too, with an estimated 3.4 million muzzleloader hunters in the U.S., Zinnel says.

He’s been working with state game agencies around the country to confirm that the FireStick is legal for hunting within the state—or to bring up a rule change that would legalize the product. He says that by this fall there will be about 30 states that will allow FireStick to be used in hunting seasons.

Ohio is one of the states that decided to tweak the language in its regulations to allow FireStick to be used during deer hunting season. Peter Novotny, the assistant chief of the state’s Department of Natural Resources compares it to when the state started allowing inline muzzleloaders to be used decades ago.

Read Next: The 8 Best Modern Muzzleloaders

“We’ve been very progressive in allowing muzzleloaders in our state,” Novotny says. “As soon as the industry announced [the FireStick], our hunters were asking ‘can I use this new system?’ It was actually requested by the hunting community to allow it.”

There has been some small opposition from folks who argue the product takes some of the challenge out of muzzleloading. But in reality, the FireStick doesn’t actually make the hunting part easier, just the loading and reloading aspect of shooting a muzzleloader.

“We’ve seen groups who say ‘my way is the only right way to do it’” Novotny says. “But when that conversation becomes exclusionary, and creates unnecessary barriers to entry, that’s when it’s our job to look at it and see if we are really doing our part to serve the whole public and the resource… It should be the individual’s freedom to make that choice on what type of hunting implement they want to use—as long as it falls under our safety parameters.”

The state has some good recent history to look back on when it comes to allowing new technology into deer seasons. Ohio has allowed crossbows in the regular bow season for more than 30 years, and despite some naysaying from some old-school archers, the state’s deer population didn’t crash. The state more recently allowed pistol-rifle (or straight-wall) cartridges to be used during the gun season and it was immensely popular among young hunters, Novotny says.

It’s likely that many other states, at least in whitetail country, will follow Ohio’s lead.