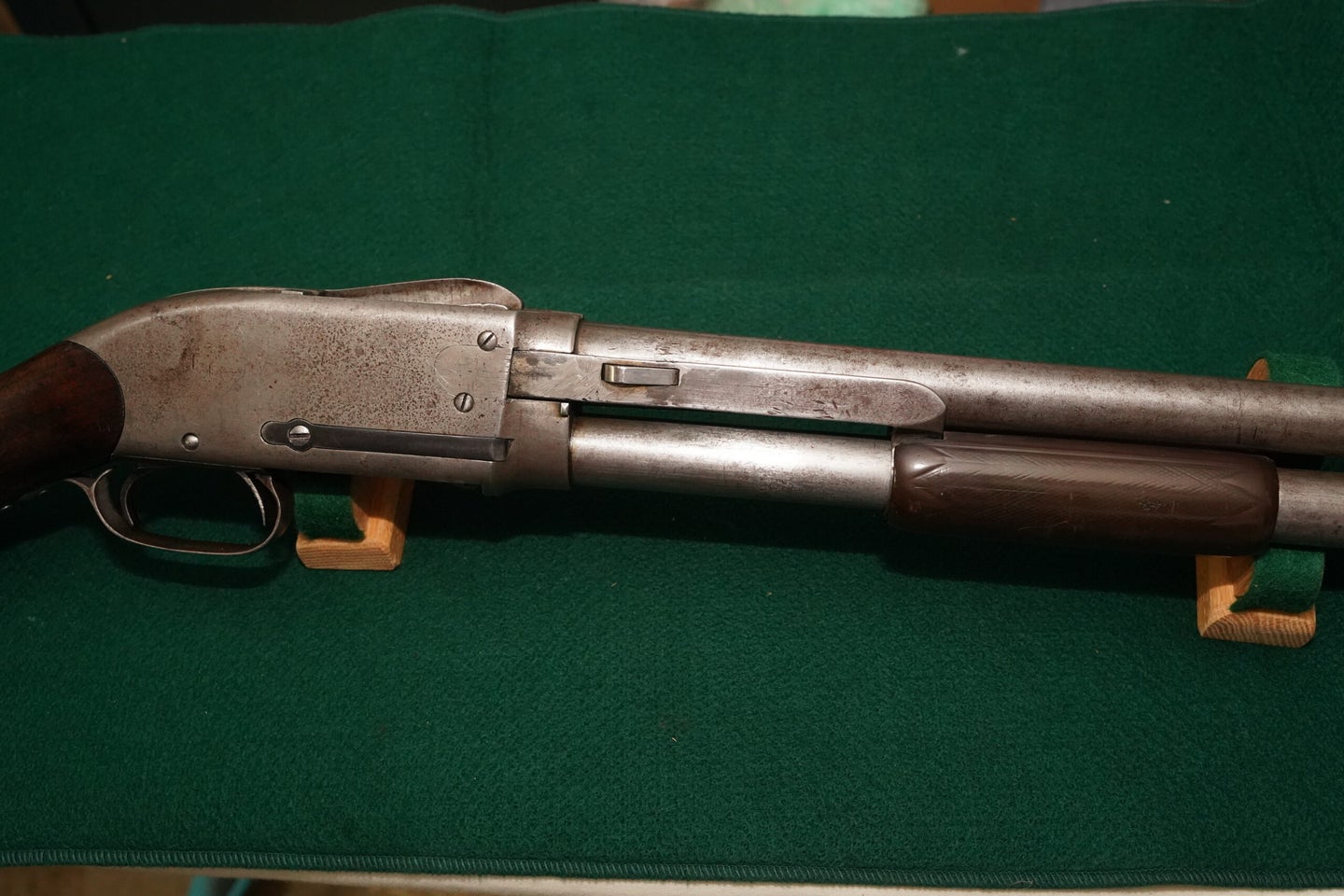 The Christopher Spencer pump-action shotgun was the first of its kind. John M. Taylor
SHARE

Most shotgun enthusiasts think John Moses Browning’s Winchester 1893 was the first pump shotgun. But it was Christopher Miner Spencer, an engineer that also built the Union Army a seven-shot repeating rifle that helped win the Civil War, who built the first pump. Spencer was granted a patent in 1882 for his repeater, which he manufactured in Windsor, Connecticut. It’s an interesting gun that one prominent museum curator called a “Rube Goldberg invention.” (Rube Goldberg was a cartoonist best known for his drawings of convoluted and complicated machines that performed simple tasks.)

The Spencer pump-action shotgun operates using a toggle breech that pivots up and down when the action is cycled. The extractor is spring mounted in front of the action on the right-side action bar and as the bar moves rearward it grasps the head of the fired shell and pulls it out onto the dished-out top of the toggling bolt. At the same time, a fresh shell is released from the magazine into a cutout in the bottom of the toggle. The last bit of rearward pumping action causes the breech to quickly flip up tossing the fired shell up and away from the top of the breech. The extractor then grasps the head of a fresh round and pushes it into the chamber with the forward stroke of the pump handle. It’s not exactly a simple process.

The Spencer looks like a modern pump shotgun with its tubular magazine beneath the barrel. To load the Spencer, the fore-end must be pulled back clearing the magazine for loading. Measuring about 15½ inches long, the magazine could hold seven or eight 2 9/16-inch shotshells, the common length of 12-gauge shells in 1882. To complete the loading process, the fore-end is then cycled to send a cartridge from the magazine into the chamber.

A unique feature of the Spencer is its second trigger. Mounted in front of the firing trigger, in case of a misfire, which was a common occurrence with early paper-cased shells and handloads, you pushed the second trigger forward, which cocked the hammer for another go at the reluctant shell.

The Spencer came with the choice of 30- or 32-inch barrels. I measured the barrel of my own Spencer with a digital barrel micrometer, and it tapered from .730 to .725 inches with a .0235 choke constriction, similar to improved modified, which measures in at .025.

After the war, Spencer partnered with Sylvester Roper. Roper is best known for the “discovery” of choke; a title widely disputed as choke was being used elsewhere well before the 1880s. However, Roper is rightly credited with the first interchangeable chokes, a set of rings with full, modified, and improved cylinder constrictions that threaded onto—not inside the barrel—the muzzle of a shotgun. Several Spencer pump guns were made with Roper’s interchangeable choke rings. I saw one in an antique shop 20 years ago at an outrageous price. They are difficult to find these days, and cost between $2,500 to $3,000.

By 1885, Spencer was in serious debt and sold the patent rights to Francis Bannerman, who continued to make the Spencer pump until 1907. Bannerman put his name on the side of the action, and all was well until 1893. That’s when Winchester launched its Model 1893 pump designed by John Browning. Slick and smooth, it was a far more shooter-friendly repeater than the Bannerman-Spencer toggle-action shotgun. Enraged, Bannerman sued everyone associated with Winchester. Winchester conducted a worldwide survey of patents issued prior to 1882 and found that in Britain there were three pump-gun patents granted, plus another in France. From the patent drawings, the Winchester Model Shop made a working model of the Krutzsch (the gun is in the Winchester Collection at the Cody Firearms Museum in Wyoming). The design was close enough to the 1893 for the judge to toss out Bannerman’s lawsuit.

The 1882 Spencer pump shotgun brought a successful repeater to the shooting and hunting public. It would be 11 years before Winchester came along with the 1893 and 21 years before John Browning’s semi-automatic Automatic 5 was introduced. Shooting a Spencer 1882 was a not a smooth experience, however, it was an important first step in the evolution of pumps and semi-autos.