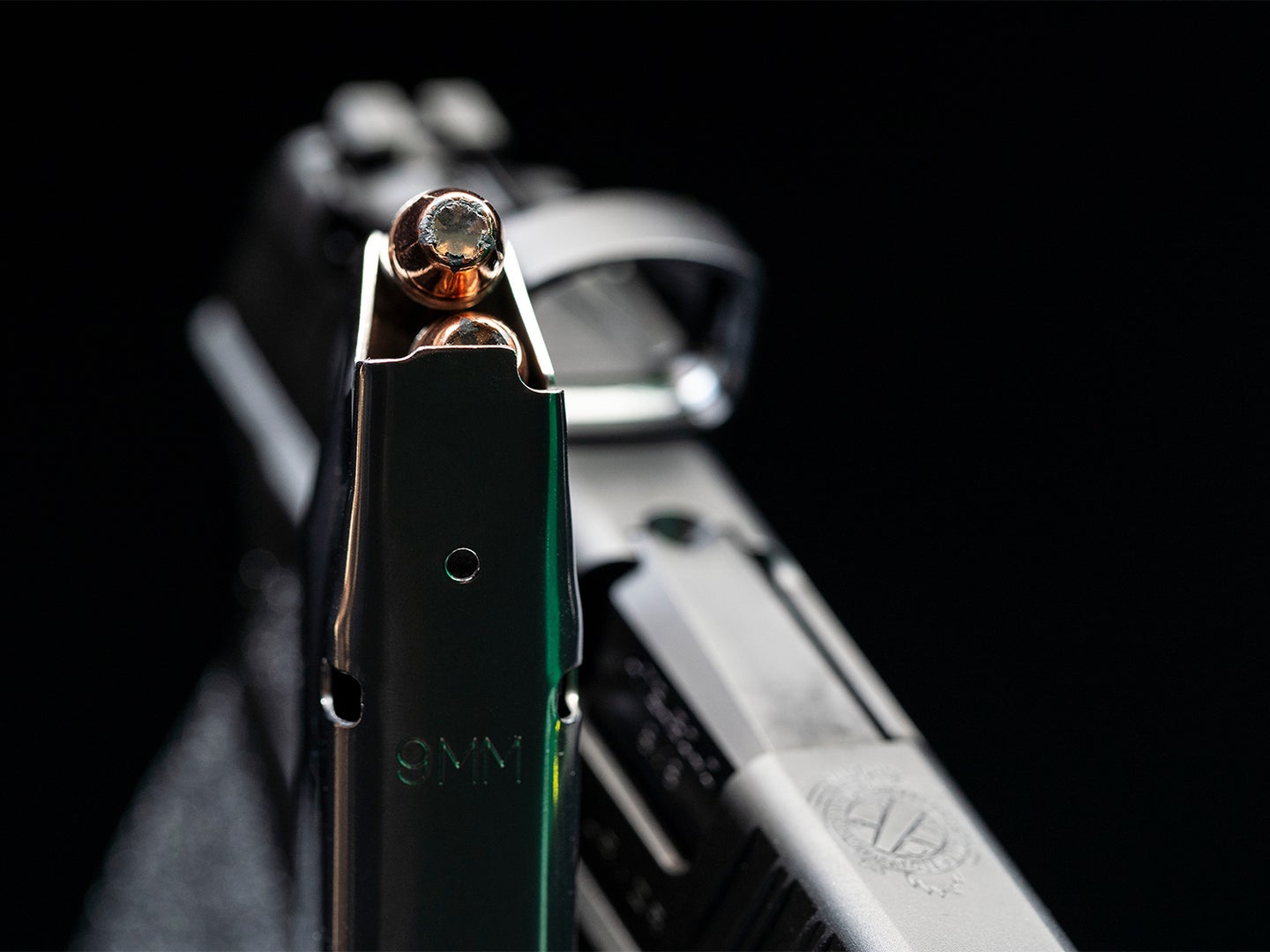 In recent months, many folks across the U.S. have considered or become first-time gun owners. Social unrest has prompted citizens in urban areas to buy a handgun for personal protection. But with so many cartridges and guns to choose from, it can be daunting to make a well-informed decision. This won’t be a comprehensive dive into ballistics, but it will help those of you still weighing your options and seeking to make an educated decision before buying a self-defense handgun. Realize supplies will be limited as U.S. citizens are buying guns in record numbers, so you may not be able to purchase the exact gun you want. But there are a variety of platforms to choose from and plenty of options. But first, let’s talk about the benefits of buying a handgun for protection.

One of the obvious advantages of carrying a smaller caliber handgun is it will better integrate into your daily life (you can comfortably carry a pistol with the right holster or in your purse). Semiautomatic pistols are best, because they have higher capacity magazines (which you can’t get with a revolver), decreased felt recoil and muzzle flip, and overall increased shootability.

You need to choose the right cartridge, which is where most new shooters can be led astray. The most common small caliber pistol offerings are the 9mm, .380 Auto and the .38 Special. While sharing virtually the same diameter as the famed 9mm round, the latter two are certainly not equal to it in overall performance and should be considered the bare minimum for self-defense applications. They won’t penetrate and expand, which are two of the most important components in a bullet, like the 9mm.

Penetration is critical, as it ensures vital organs can be reached by the fired projectile, allowing the bullet to do its job, if placed properly. If a round lacks penetration, the desired effect (stopping the threat) might not be achieved, especially if the attacker is wearing heavy or thick clothing. By technical standards, you want a minimum of 12 inches and a maximum of 18 inches in calibrated ordnance gelatin (those big blocks of yellow gel firearms testers shoot into) penetration.

There are no hard and fast recommendations for expansion. Generally speaking, shooters should be seeking a round that will expand a minimum 1.5 times its original diameter. That means .60-inch for 9mm, and .50-inch for both .38 Special and .380 Auto. Traditionally, this has meant a hollow point projectile should top your list, however, the new spiral fluted projectiles from Black Hills and Inceptor ammunition accomplish tissue disruption in a different way, and are good buys. In fact, spiral fluted projectiles, while costly, just might be the future for pistol ammo, as intermediate barriers and clothing seemingly have little, if any, effect on their terminal performance, unlike hollow points.

The 9mm is the king of the hill when it comes to handgun loads. Supply is generally very good, meaning you can find it for sale — in volume — just about anywhere. Ammunition manufacturers have dedicated significant research and development to the round, and it is the best it has ever been. The U.S. military, FBI, other government agencies, state, county, local law enforcement, and countless civilian shooters rely on the round for good reason. It’s reliable, low recoiling, and extremely accurate, not to mention affordable and attainable. It can also be had in a variety of grain weights, bullet designs and material compositions to include lead, copper, and even a polymer matrix. Personally, I see no reason to look anywhere other than 9mm for self-defense purposes. Here are three rounds I would recommend:

Federal HST 124-grain JHP: Federal’s HST line is the duty load of choice by law enforcement officers throughout the world. It has a specifically designed hollow point that won’t plug while passing through a variety of barriers, and the bullet jacket and core stay together to provide nearly 100 percent weight retention, even when shot through most intermediate barriers. HST is incredibly accurate and produces the desired level of penetration for personal defense situations without over penetrating. The bullet nose profile, nickel-plated case and high performance primer provide the ultimate in function and reliability in semiautomatic pistols and is always my first choice in 9mm defensive loads.

Read Next: Top 10 Carry Handguns (and 5 Extras Just in Case)

The .380 Auto does nothing that the 9mm can’t do far better, and for far less money. You could argue that felt recoil is less in some platforms, but with a slight reduction in recoil comes a significant reduction in terminal performance, magazine capacity, and in many cases, reliability. If you must carry a .380 Auto, I highly recommend you choose one of the following spiral fluted rounds. I’ve personally witnessed and taken part in spiral fluted .380 Auto testing and development, and recommend them. These rounds penetrate 10 to 15 inches when shot into ballistic gelatin, whether bare or through four layers of denim, a thick leather jacket, and everything in-between.

Black Hills 60-grain HoneyBadger: Developed in conjunction with Lehigh Defense, this spiral fluted ammunition does not rely on a hollow point design that can get plugged up with clothing and fail to expand. The HoneyBadger relies on higher than average velocity and fluid disbursement from its spiral fluted design. The cutting edges on the projectiles forward surface redirect the tissue it impacts and spirals deep into the target like a cork screw. Weight retention is near 100 percent and the projectile does not rely on a hollow point design to be effective. The round is constructed of solid copper.

Inceptor ARX: Inceptor ammunition, formerly PolyCase Ammunition, blazed the way for spiral fluted ammunition. ARX, short for Advanced Rotational eXtreme, features a non-expanding bullet that transfers both the directional and rotational force of the projectile to the target, producing exceptional penetration, while also reducing the risk of over-penetration. The ARX load is constructed of a polymer copper blend. Yes, you read that right, the round is partially made of plastic, which acts like a frangible round that quickly fragments after impacting a hard surface.

I don’t necessarily dislike the performance of the .38 Special as much as I dislike the platform it is shot from — the five-shot snub nose revolver. I can’t stand watching folks, especially uneducated folks, be misled by those who know better, yet decide to influence a naïve shooter anyway. Just because you’ve been shooting for 30 years doesn’t mean you’ve been doing it right, or even know what right looks like.

Too many times new shooters, especially females, are pointed in the direction of a snub nose revolver. The justifications are many, and most are false. Revolvers do, in fact malfunction. Long double-action or double-action/single-action triggers are by far the most difficult to master. Plus, you only get five rounds, and that may not be enough to stop a single threat, let alone multiples. CCW revolvers are not fast to reload and they’re no safer than modern semiautomatic pistols. They’re not easier to draw or shoot, in fact the opposite is most often true. Recoil is more stout, the sights are extremely limited, and ergonomics leave much to be desired. We’ve come a very long way in firearm technology and cartridge development, and the revolver should be left in the late 1980s.

For these reasons and more, the snub nose revolver for concealed carry should be avoided, and as such, the .38 Special cartridge along with it. But — if you must — the round I recommend is the 100-grain .38 +P HoneyBadger from Black Hills Ammunition, as it performs similarly to the .380 HoneyBadger round.

Ultimately, training with your chosen firearm is the most important component in a concealed carry pistol. Accurate hits in any reasonable caliber will stop a threat, if that threat has experienced enough brain or spinal cord damage to disrupt neurologic impulses from reaching vital areas of the body, or the person has lost enough blood. Shot placement and number of shots fired are both key, but you can certainly hedge your bets by choosing the most effective caliber available to you, which is the 9mm.