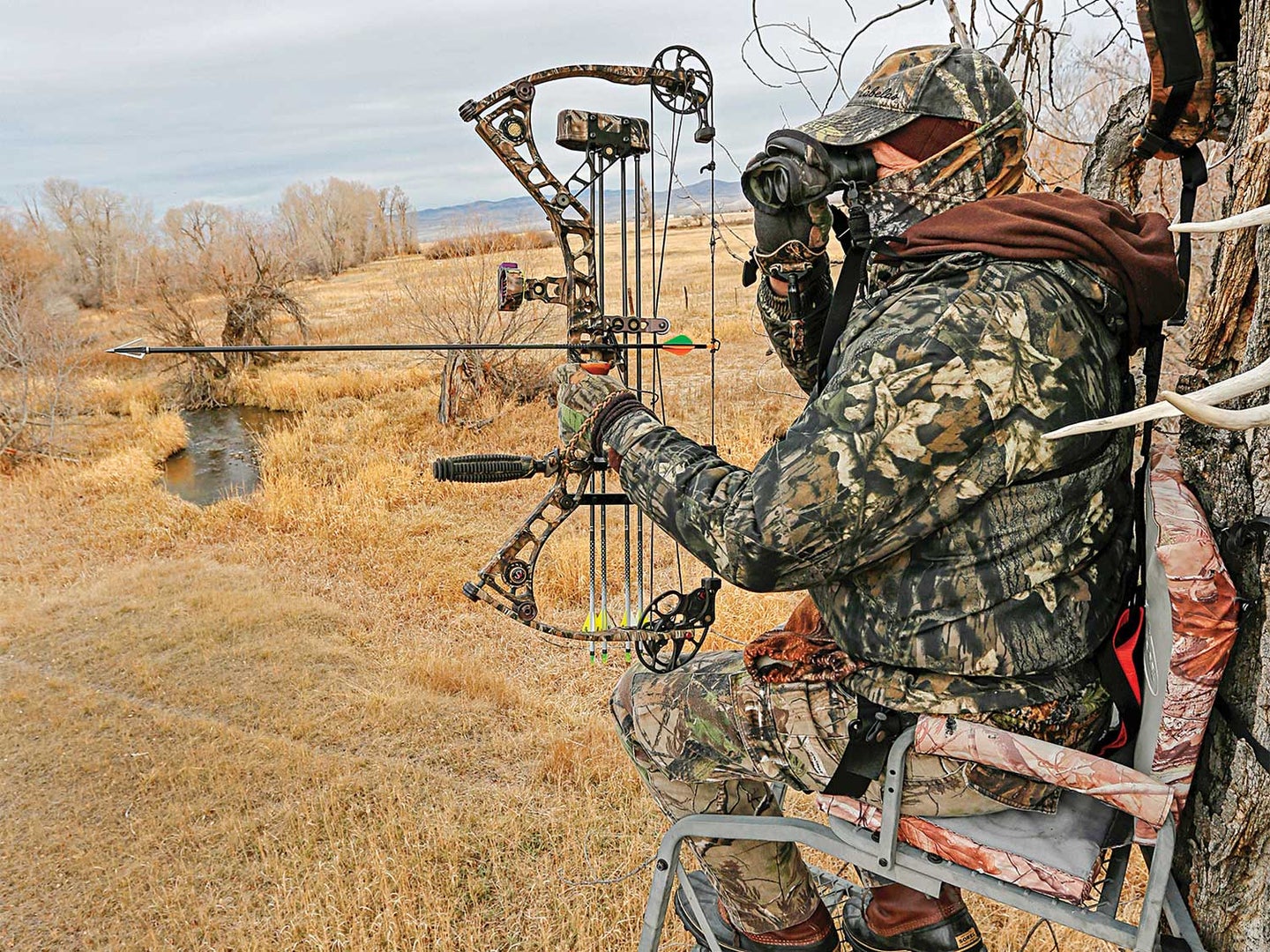 This was in northeast Montana’s Milk River Valley, an area known for producing lots of whitetails, some of them wall-hangers. Though my food plot looked succulent and had all the variety of a supper-club salad bar, deer walked right past it on their way to their preferred groceries: the irrigated alfalfa that dominates the valley’s agricultural ground.

That was my first lesson in Western whitetail hunting: Don’t rely on a single attractant. For the second lesson, I served as the experienced teacher. My friend, a dedicated deer hunter from my home state of Missouri, showed up with his bow and a climbing stand. He stored his hunting clothes in a scent-excluding tote and showered with perfume-free soap. He was genuinely perplexed when I jumped in my pickup wearing work-worn Carhartts and a sweaty ball cap, and invited him to come spot deer for the evening hunt.

We drove to a bluff overlooking the Milk, leaned back into sandstone rimrocks, and glassed the valley below. Once we saw a buck worth chasing emerge from a line of cottonwoods, we assessed the wind, drove down to the valley, and crawled into an irrigation ditch. With the wind in our face and our profiles low, we worked down the ditch until we intercepted the target buck. My buddy scooched into the side of the ditch and missed a 35-yard bow shot at a dandy 4-point (which he kept referring to by its Eastern count: an 8-point).

He’d never hunted deer from the ground but appreciated the takeaway: Deer in wide-open country follow predictable patterns but erratic routes, and so mobile hunters have an edge over those in stands or blinds. Consistent winds, generally from the west or northwest, are the invisible friend of stalkers.

The steady expansion of whitetails out of Midwestern woodlands is an old story. They’re established in most riverbottoms of the West, share space with mule deer in CRP fields and dry prairie washes, and dominate lower-elevation pine forests from the Black Hills to northwest Montana into eastern Washington. The little “gray ghost” of the Southwest, the Coues deer, is also a flavor of whitetail, but for the purposes of this story, we’re talking about the larger, more typical Eastern whitetail.

Hunting whitetails in the West can be a gentlemanly affair. Whitetails anywhere are nervous in the open, but out here, because they are typically required to come into fields to feed, deer emerge from cover toward evening, gorge well into the night, then go back to that cover to sleep for much of the day. That behavior allows hunters to sleep in and get in place to intercept deer just before twilight. It also puts a premium on good optics, which not only resolve detail across long distances but also gather light for last-minute shots.

Optics are also key assets for hunting upland whitetails, which exist in low densities over expansive country. The best open-country deer hunters I know park their pickups on vantages and use window-mounted spotting scopes to pick apart the landscape for hours. When they find a buck worth pursuing, they devote several days to patterning it before they find a way to get within killing range. That brings up another truism of Western deer hunting: You’ll generally take longer shots here, with a bow or a rifle, than you might in tight-cover country.

The final lesson for this semester: Western whitetails respond to calls more readily than their Eastern cousins. Maybe it’s because of the open spaces, but sound carries well here, and the percussive crash of rattling antlers or the bellicose grunt of a buck call can draw daylight whitetails out of cover for those hunters who don’t cotton to sleeping in and hunting the last light of a Western evening.

Read Next: Women Hunters Tagging Out in Nebraska’s Sandhills

Out of the ashes of Cabela’s, the outdoor retail giant that was purchased by the even larger Bass Pro Shops in 2017, comes a new line of outdoor gear that includes a backpack purpose-built for deer hunters.

Nexgen Outfitters’ Whitetail Caddy Pack ($100) is a hybrid of a run-and-gun gear tote—with nearly 2,000 cubic inches of capacity—and a treestand workbench; exterior flaps open to provide easy access to calls, scents, bug repellent, or optics. A quick-release buckle on the beefy handle strap clips over limbs as large as 4 inches in diameter.

The pack is available in Realtree Timber camo pattern.