Busted: 10 Myths About Scaring Off Deer 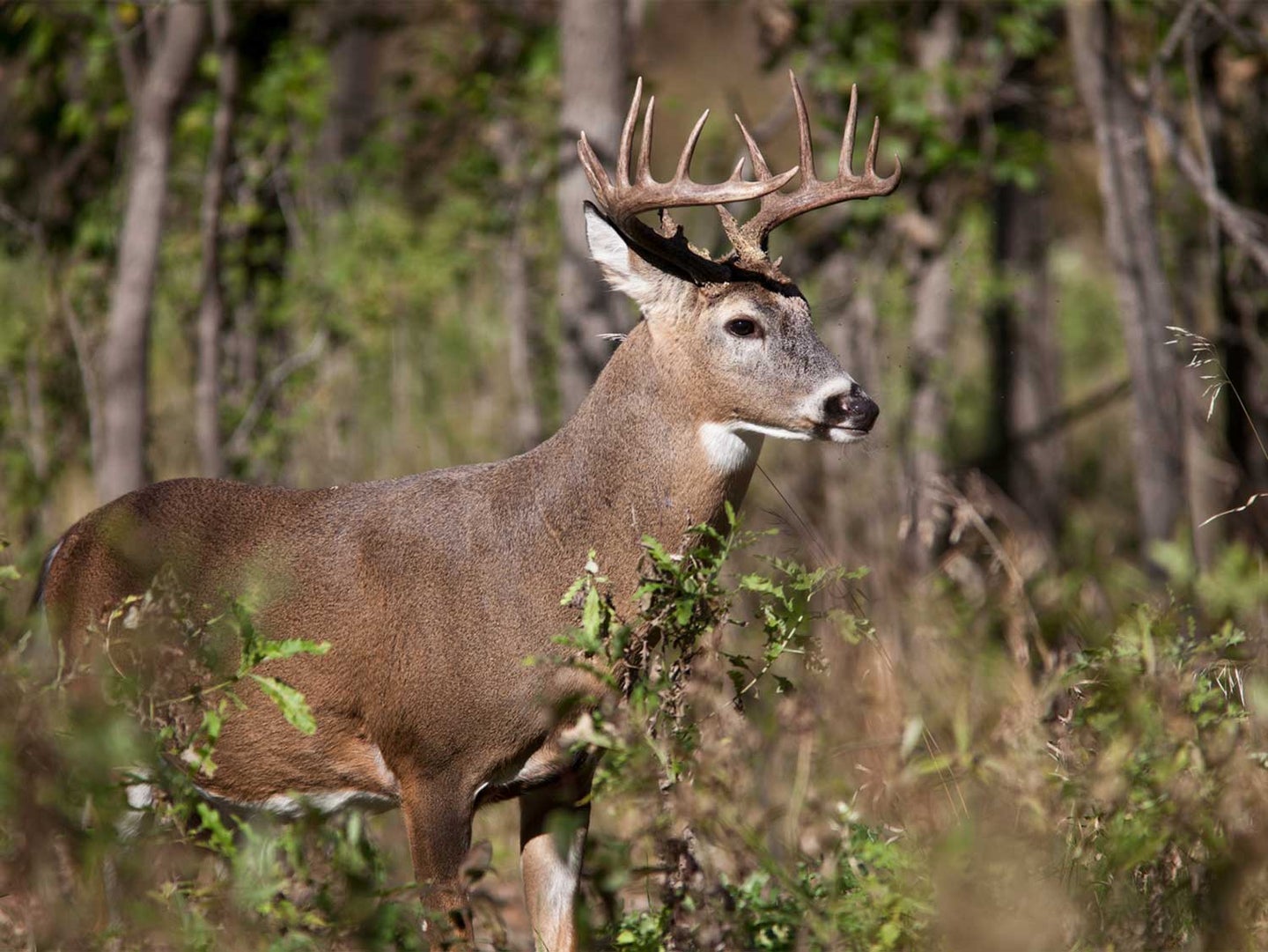 There are many factors that alert deer to danger. National Park Service
SHARE

There are many things that alert deer and cause them to hightail it to parts unknown, never to be seen in your food plot again. However, hunters have misconceptions about the things that always put deer on edge, or that all-out spook them. Deer are interesting animals, and the rules that govern when and how they blow out of an area are not always black and white. In light of that, here are 10 things that don’t always send whitetails running for safety of heavy cover.

I watched a big typical emerge from a cedar thicket. A sentry on his right and left, the trio of mature bucks marched across the field, straight toward my stand. Sweat poured from my brow, but the wind was so stiff it wicked away the perspiration droplets as fast as my adrenaline could manufacture it. Within minutes, I arrowed the biggest deer in the group.

Hunters say it all the time: “deer are spooky on windy days.” Well, tell that to the Penn State University (PSU) whitetail experts. The research undeniably supports bucks are more apt to move on windier days. Researchers analyzed three different categories of wind speeds (less than 1 mph, 1 to 15 mph, and 16 to 27 mph). The replicated study showed that, during daylight hours, bucks moved 30 meters per hour with less than 1 mph of wind, about 35 meters per hour in 1 to 15 mph winds, and a staggering 65 meters per hour in 16 to 27 mph winds. Translation? Wind doesn’t bother deer.

Hunters pee outside, but when my buddy took a leak in front of my best deerstand, which happens to overlook a giant community scrape, it pissed me off. A big deer was in the area, and the last thing I wanted was him irrigating the very spot I expected to run an arrow through that buck.

I figured the deer would never show its rack around my tree again. But it was on camera hitting that scrape the same afternoon, and returned each day for more than a week. I can’t say there isn’t a deer in the woods that won’t spook from human urine, but I’ve peed in real and fake scrapes for the better part of a decade now, and had lots of photos and videos of big deer tending them afterward.

I held my breath as a pair of coyotes trotted through the field. Deer were everywhere, but they just stopped feeding to stare. Not one of them ran. Eventually, the song dogs disappeared, and the deer went back about their business, chewing alfalfa, acorns, and cuds.

Deer and coyotes are natural enemies. Still, I’ve witnessed more deer merely watch than run as a coyote shares a field with them. Sure, if the dog makes an aggressive move, deer dash. But I’ve witnessed too many whitetails just stand and stare to say a hunt is over when a coyote trots by.

My No. 1 target buck walks up to the camera, sniffs it, and lazily goes on its way. Ten minutes later, another buck on the farm does the same, and runs like Satan just smacked it on the ass.

Some people think trail cameras spook too many whitetails. That’s not entirely true. After a decade of running cams, and countless video clips, I’ve determined it’s all about the buck’s personality. Some are tolerant, even indifferent, when it comes to cameras. Trail camera videos reveal some deer respond negatively, while others won’t even acknowledge their presence.

5. Deer are Scared of Trucks

More than half of my trail cameras —I deploy 40— are checked through a truck window. That’s by design, and allows me to monitor them without setting foot on the ground. Some people argue it’s better to quietly walk in than to drive a loud vehicle by. Personally, I’d rather a deer see and hear a truck than to see, smell, and/or hear me.

Trucks can serve as low-impact access options when working and scouting. Deer certainly see the big hunk of metal, and usually run from it, but I doubt they associate these with humans or danger. Take advantage of that. If legal and safe, drive a vehicle around a property to check cameras, fix treestands, and complete other tasks. Deer might run, but in my experience, the sight, sound, and smell of a human generally has a bigger impact.

6. The Farmer’s Tractor Ruins Your Morning

I’m three days into a hunt, and finally the deer I am targeting walks directly to the middle of the field and stays there until dark. Hours pass as I watch it by moonlight. Not wanting the deer to see me leave, I call the farmer and ask him to pick me up in his John Deere. He does, and the deer pays little attention to my exit.

On farms, I love being dropped off and picked up by someone in a tractor. Sometimes, they can even drive up to the tree I’m sitting in, and deer are none the wiser. This prevents them from seeing, smelling, or hearing me along entry and exit routes. It’s also a great way to exit the woods after dark if hunting over a food source full of deer.

7. Deer are Leery of Boats

I’m paddling up river in a 17-foot canoe. Three others follow behind me. Eventually, we round a bend, and there it stands — a big typical. It watches from the riverbank, observing our party. It never bolts, and as we hit the next turn in the river, it’s still walking along the bank.

If we were in motorboats, we’d likely never have seen the deer. However, that encounter shows how beneficial canoes and kayaks can be for deer hunting. They cut down on ground scent, open up new entry and exit routes, and even if a deer sees you, it might not register you as a threat.

There’s and old doe with a king-sized snout that’s been on my cameras since 2011. She has busted me for years, alerting other deer with her infamous blow. But now that she has done it for so many seasons, the other deer typically glance in her direction and continue munching soybeans.

I cringe every time a deer blows. It’s the third most obnoxious sound, right behind incessant open-mouth chewing and a forest full of salacious cicadas. The good news? Sometimes that pesky doe will ruin the morning with one of its field-clearing snorts. But it won’t always end the hunt. On numerous occasions I’ve witnessed does blow, and the other deer in the field practically ignore them. Maybe they “cried wolf” one too many times? I don’t know. But I do know hunts aren’t always over just because a deer clears its snout.

9. You Can’t Cut Limbs During a Hunt

I’m high in an oak tree, and a couple pesky limbs are blocking vital shooting lanes. I pull out my hand saw, and zip through the first limb. I’m halfway through the second when I catch movement over my shoulder. A stud is walking in on my stand. I freeze. It walks under the tree and sniffs the sawdust shavings that just fell to the ground.

Some hunters are so afraid of spooking deer that they won’t make a peep. That’s understandable. But one thing hunters might not have to worry about is cutting limbs. I’m a firm believer the sound of the hand saw actually lured that deer. Maybe it mistook the sound for another buck making a rub. Maybe it was just curios. Either way, I was being loud, and the deer didn’t spook from it. A few seasons later, a similar experienced unfolded. I don’t think it was a coincidence.

I slowly eased along my entry route. About halfway to the tree, I saw a brown blob on the ridge above. I kept walking, slowly turned my head, and there was the deer. Instead of bolting, it remained bedded, and inquisitively studied me. It eventually faded from view, and I climbed into the treestand about 100 yards away.

Of course, I glassed where it was, and occasionally saw antler tines moving in the brambles. The buck never left its bed, even after I faded from view. It would have been different if I stopped, or if I walked toward the deer. Still, I thought it was especially interesting, and it proved (at least to me) that every deer responds differently to seeing, hearing, and smelling humans.