A veteran black bear bowhunter shot this massive bruin with a .300 Win. Mag. after dropping his bow out of the treestand 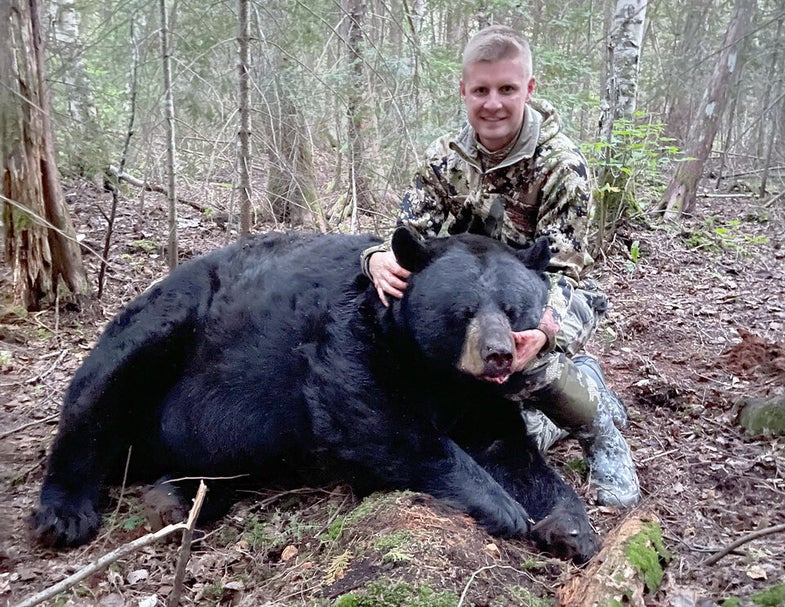 It was early evening on Sept. 16, and Shaun Stratford was sitting alone in a climbing stand above one of his prime Ontario bear bait sites. It was where the biggest bruin he’d ever seen had been showing up on his trail cameras. He’d hunted the Ontario black bear for two years, nicknaming the boar “Chevy” because of its massive size and the distinctive white chevron blaze on its chest. Until then, the bear had been primarily moving at night.

“I heard a rustle in the bush, and I knew it was a bear, but I didn’t think anything of it,” the 40-year-old roofing company owner from Hamilton, Ontario, said. “To my surprise, it was Chevy in full daylight. I instantly started shaking uncontrollably. I was shaking so much that when I reached for my bow I knocked it out of my stand where it fell 20 feet to the ground.”

Chevy looked over at the noise of Stratford’s compound hitting the dirt, but he didn’t spook. The bear was too busy eating.

“I was in disbelief. Complete astonishment,” Stratford says, noting that it’s legal to carry a rifle and a bow in the unit he was hunting. “So I grabbed my .300 Winchester Magnum rifle, which I carry for protection. Lined up the 60-yard shot and fired.”

The massive bear took off “like a Mack truck trying to find first gear on a hill.”

Stratford and his pals had plenty of trail camera photos of the bear over a two-year span, and they’d pinpointed the area Chevy frequented in a public hunting area north of Temagami, in Wildlife Management Unit 40. The area is 50 miles from the nearest town, with bait sites several hundred yards from a road.

Baiting and hunting bears is Stratford’s passion, and this year he and some hunting buddies trucked in more than four tons of bear bait, lugging it into the woods to five different bait sites. The hunters alternated where to hunt according to bear activity and wind direction.

Stratford carries a rifle even when bowhunting, after an incident several years ago when a 600-pound bear nearly knock him out of a ladder stand. After he shot the bear with an arrow, it charged his ladder and destroyed it. Stratford put a second and final arrow in that heavyweight bruin.

That’s why he carried his rifle to his stand on the day he shot Chevy. This giant bear traveled only 30 yards before collapsing. The bear was so massive that Stratford couldn’t even roll it over. He summoned help to load the bear and get it out of the woods. His friends Dave Smetana and Matt VanVliet arrived with a tractor, winches, and a trailer. Three hours later, they had the boar loaded and headed home.

Read Next: The Best Black Bear Hunting Unit in the World

After field dressing, the bear weighed 803.9 pounds. Some of the meat and fat were donated to locals, and the rest of the meat is at the processor. The hide and skull are at a taxidermist near Toronto, where a full-body mount of the bear will be made. The 60-day drying period must pass before an official score of the bear’s skull can be determined, which is how trophy black bears are scored and ranked.