Michael Beadle has shot plenty of whitetails in his 30-years of bowhunting, but this massive deer is truly a special one 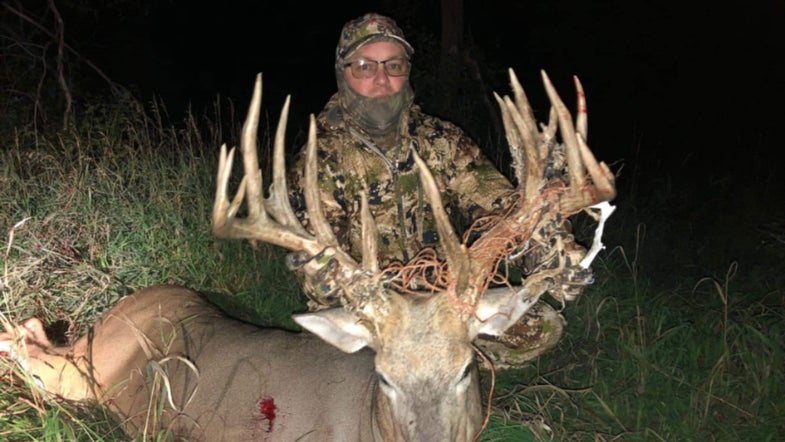 Mike Beadle heard something behind his treestand in northeastern South Dakota late in the afternoon of Sept. 12. For a moment, the 45-year-old bowhunter thought it was the doe and fawn he’d seen a few minutes earlier. But when he glanced behind him, he spotted the massive buck he’d been monitoring on trail cameras since May 29. The buck was broadside, standing just 18 yards away.

“I used the tree trunk as cover to draw my 60-pound Hoyt bow,” says Beadle. “But I had a hard time anchoring. I mentally couldn’t do it. It really was buck fever. I was so excited. But I gathered my senses, calmed down, and said to myself ‘Just focus on the spot to aim.’”

Beadle pulled himself together, found his anchor point, and leaned around the tree. He focused on the buck’s shoulder, aimed, and released.

“I knew I smoked him, just a perfect hit behind the shoulder,” says Beadle. “Sometimes there’s a little uneasiness or worry about where an arrow hits some deer. But not this time.”

Beadle’s deer is truly a once-in-a-lifetime buck. The rack is a 12 by 14 frame with double drop tines and sticker points going everywhere, says Beadle. Some of the mass and tines are easy to overlook because the buck has about 100 feet of wire wrapped around its antlers. As best as Beadle can figure, the deer somehow got tangled up in it while cruising the South Dakota farm country.

Beadle and his good friend Jim MacDougal green-scored the buck. They gross scored it at 218 7/8 inches, and a net score of 209 7/8. The deer can’t be officially scored until the 60-day drying period passes, but it’s surely a buck for the record books.

Beadle had been hunting this stand in a small cattail slough near a shelter belt and corn fields since the South Dakota season opened on Sept. 1. It’s private farmland that four generations of his family have hunted.

“I got my first photos of the buck in late May from a trail camera, and really started watching the buck in August when he was in velvet,” says Beadle, who lives in Aberdeen. He owns a lawn and tree spraying business, which is about an hour drive from his hunting spot.

Using trail cameras, he patterned the giant buck leading up to the few weeks prior to the South Dakota opening day of bow deer season on Sept. 1. He placed a double-wide tree stand in a slough where the buck used in its travels, though the deer was mostly nocturnal.

“I was relentless hunting that stand, dawn and dusk every day for 10 days straight,” says Beadle. “My cameras showed he was coming through the area near the stand, but at night.”

Finally, on Sept. 11, Beadle took a break from hunting the buck. He went to church the following morning, again not hunting the stand. That’s when he learned from his remote trail camera that the buck had come by his stand late on Sept. 11—just five minutes before the end of shooting light.

“I got home from church, saw the buck had been near my stand during shooting light the previous day,” says Beadle. “I did a little work on Sunday, and tried to watch a bit of football, but decided that I just had to go and hunt the stand again that afternoon.”

Beadle carefully went through his scent-control routine of showering and spraying down his camo before heading out. He was in his stand by 4:30 p.m., and the buck showed up just before dark.

A Long Wait, and An Easy Recovery

Although he knew he’d made a lethal shot on the buck, Beadle waited about 30 minutes before climbing down from his stand, and he didn’t take up the trail until another 30 minutes. He wanted to be cautious: The deer hadn’t run fast and hard like many deer do after Beadle hit the buck with his arrow—he’d heard the deer moving slowly through timber after his shot.

It was full dark when Beadle started trailing the buck, which left a good blood trail. The deer traveled only about 100 yards before falling. Beadle found the buck in a grassy patch of timber, and was overwhelmed at the sight of the giant whitetail. He called his sons Logan, 20, and Calvin, 18, who were able to drive a pickup truck to within 20 yards of the giant 250-pound buck and help load it for their dad.