How to Kill the Smartest, Most Pressured Mallards

Greenheads are beginning to rival big Canada geese as the toughest migratory bird to hunt in some parts of the country. Here’s how to trick pressured drakes into the decoys 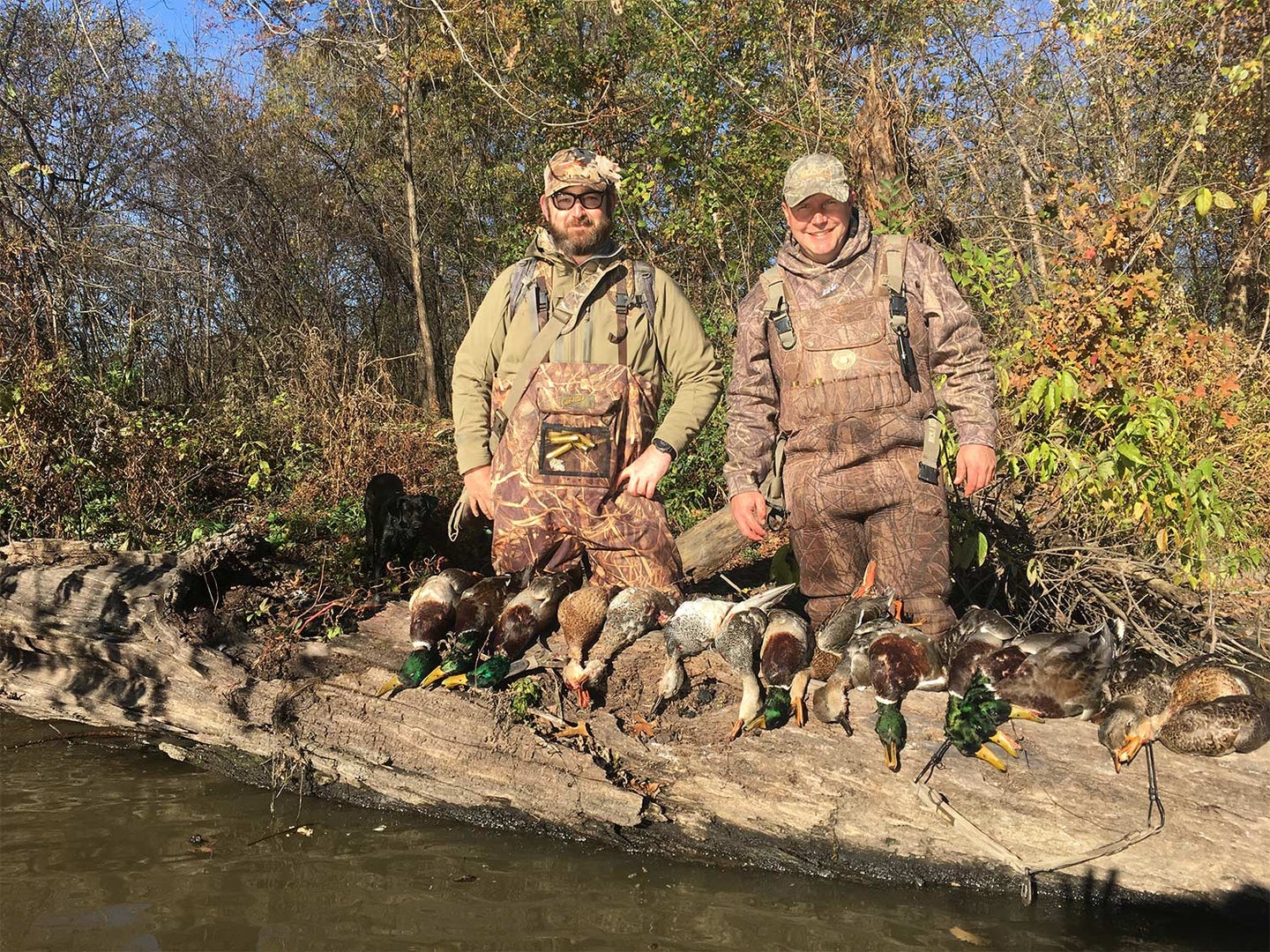 A small creek can be a killer spot for late-season greenheads. We shot a few gadwall, too, on this morning. Joe Genzel
SHARE

Duck hunters have been infatuated with mallards since the dawn of the duck call. They are the most call-responsive species of waterfowl, and we love to turn around drakes, who would otherwise keep flying back to the refuge, into the decoys floating in front of the duck blind. That’s probably one of the reasons why they have become so wary in many places across the four flyways—we hunt them too darn much.

More than any other duck (with the exception of the fickle gadwall and pintail), mallards figure out the game quickest when hunting season begins. And as the season runs deeper into December and January, they can become very difficult to kill. Just like any other waterfowl species, mallards are most susceptible when the weather forces them to fly and feed. But there are a lot of days where greenheads simply won’t move much. Hell, maybe they only fly once in a very short window of time, which shrinks your chances to kill them.

There are a few tactics I have learned over the years that have led to more full straps. They aren’t foolproof, and I’ve lost to late-season and pressured mallards more than I have won. But these tips can still give you an edge over everyone else in the marsh.

Every duck hunter hates to see a full moon, because it allows ducks to feed at night, and then they won’t fly out the next morning. But if there was a decent temperature drop the night before, it’s sunny, and there’s an 8 to 10 mph wind forecast for the morning, you can kill greenheads. Typically, there will be a few birds that move at shooting light and then a pretty long lull—until maybe 11 a.m. or noon—before you see another duck. If you sleep in and get out there in the late morning, you have a pretty good chance of killing greenheads. For one, you’re not going to have as much competition, because most hunters that woke up early will call it quits around 10 a.m. (or sooner), so it might just be you out there in the marsh. That’s a big advantage.

Mallards are pretty much the only ducks that fly late like this. “They’re lazy,” one of my good hunting buddies always says. Well, actually, they’re smart. They know when hunters are most likely to shoot at them. That’s why so many ducks pile into flooded corn impoundments after shooting time—they know it’s safe. But in my experience, when there is cold, wind, and sunshine, stale mallards move regardless of the full moon. You just have to be patient, and wait for that mid-day flight.

This is a tough hunt to come by because it’s hard to get access much of the time, but if it’s late-season and the greenheads have mysteriously disappeared, look for small creeks near the roost, feed, or anywhere in between. Oxbows are good, too. Pressured mallards will often come to a flooded field before shooting light, and then fly off for parts unknown before you can legally shoot.

Like any other wild game that gets hunted hard, they seek solitude. Think about how hard it is to kill and old buck or tom. Late-season greenheads are just as smart. But they do need water, and that’s to your advantage. I’ve found hundreds and even thousands of mallards loafing all day in creeks that are no more than 10 yards wide. That’s because no one bothers them there. Most hunters don’t think to look in such places—I know I didn’t for a long time. We are more apt to hunt conventional locales like the marsh, river, or a farm pond.

The best way to kill them is to put in time scouting. Look at Google Maps or onX Hunt and find creeks. Then scout the mornings and watch where the ducks move. If it looks like they are going into a bottom, then get in the creek before shooting time the next morning and see where they’re landing. Then quietly slip out of there and set up on them the next day. You don’t need any decoys or calling. Just get on the X, be ready to shoot, and pray they don’t all come at once.

Hunt Where They Live

Sometimes when mallards get stale and won’t move much, you have to make them pay the rent for living in your corn. As much as you might not want to disrupt the area ducks are roosting—and I’m talking on your property or lease, not the public refuge—you have to go hunt them there. Do this before a season split or the last 10 days of duck season. It’s going to push the ducks out of there, but what’s the point of putting all that money and work into your property just to feed a bunch of ducks and not kill them? And if you are friendly with your neighbors, make a pact. If none of you are killing greenheads, invite them along on the condition that if the ducks jump over to their property, you get a reciprocal invite. A buddy of mine has done this for years on stale ducks, and it works.

Typically, what happens is they flush the ducks off in the dark (a major no-no any other time of year), set up, and kill whatever trickles back in as fast as they can. They leave the decoys when they’re done and get the hell out of there. Then they go stand on the levee and drink coffee and wait to see how many birds return. If it’s enough for the next day’s hunt, they do it all over again, until the birds find another farm or leave the area entirely. The key is to do this when the season is coming to an end, so it doesn’t matter if you force the ducks out, or the forecast looks good for a migration day in the near future. The latter allows you to kill the stale ducks, and then in a day or two when the migration comes, you have fresh birds to replace them.

Read Next: How to Hunt Late-Season Mallards in Fields vs. Water

Stay Away from Traditional Duck Haunts

The easiest way to get skunked late in the season is by hunting areas that always get pressure. I think the biggest reason duck hunters don’t kill ducks is because they are unwilling to hunt new places, and that especially applies to mallards, because greenheads are the one bird most duck hunters want to kill, which makes them more educated. Guys that are standing next to the same oak tree they have been for the last 30 years aren’t killing smart greenheads. If you’re a duck, and you’ve had your ass shot off in the same place for three decades, you’re eventually going to learn to avoid it. And December and January, greenheads are more likely to be older birds, so they know better.

The key is to go where hunters aren’t. For instance, every duck hunter wants to go to Bayou Meto in Stuttgart, but late in the season, the hunting is often much better in northern Arkansas, or the Missouri Bootheel, because there just aren’t as many hunters and that means less pressure on ducks. You have to be willing to go to places most other hunters won’t, and I don’t mean an extra mile down the public levee. You’re going to have to get in your truck and scout.

This can be a really tough task because they are hard to find, but mallards (hell, any ducks) love natural spring holes. Most hunters think that when there is a hard freeze, they can turn on the ice eater and the ducks will suck right in. Granted, that is a good plan and it can happen.

But, a spring hole trumps an ice eater every time when water starts locking up. Why? My guess is because spring water has been open for centuries, long before a bubbler was invented, and the ducks are used to going to them during a freeze up. One of my buddies has been hunting the same duck club his entire life. About 10 years ago, they dug a well and ran electric to all the blinds so they could run ice eaters and keep water open when almost everyone else around them could not. And they do kill some ducks in those ice-eater holes, but there are two natural springs on the property, and a majority of the ducks still go to those in droves when the temperature plummets. Maybe after 100 years of using bubblers, the ducks will hit those manufactured holes harder, but for now, he still picks the springs if his number is called early enough during the morning draw.