A 204-inch Iowa Bow Buck For The Ages 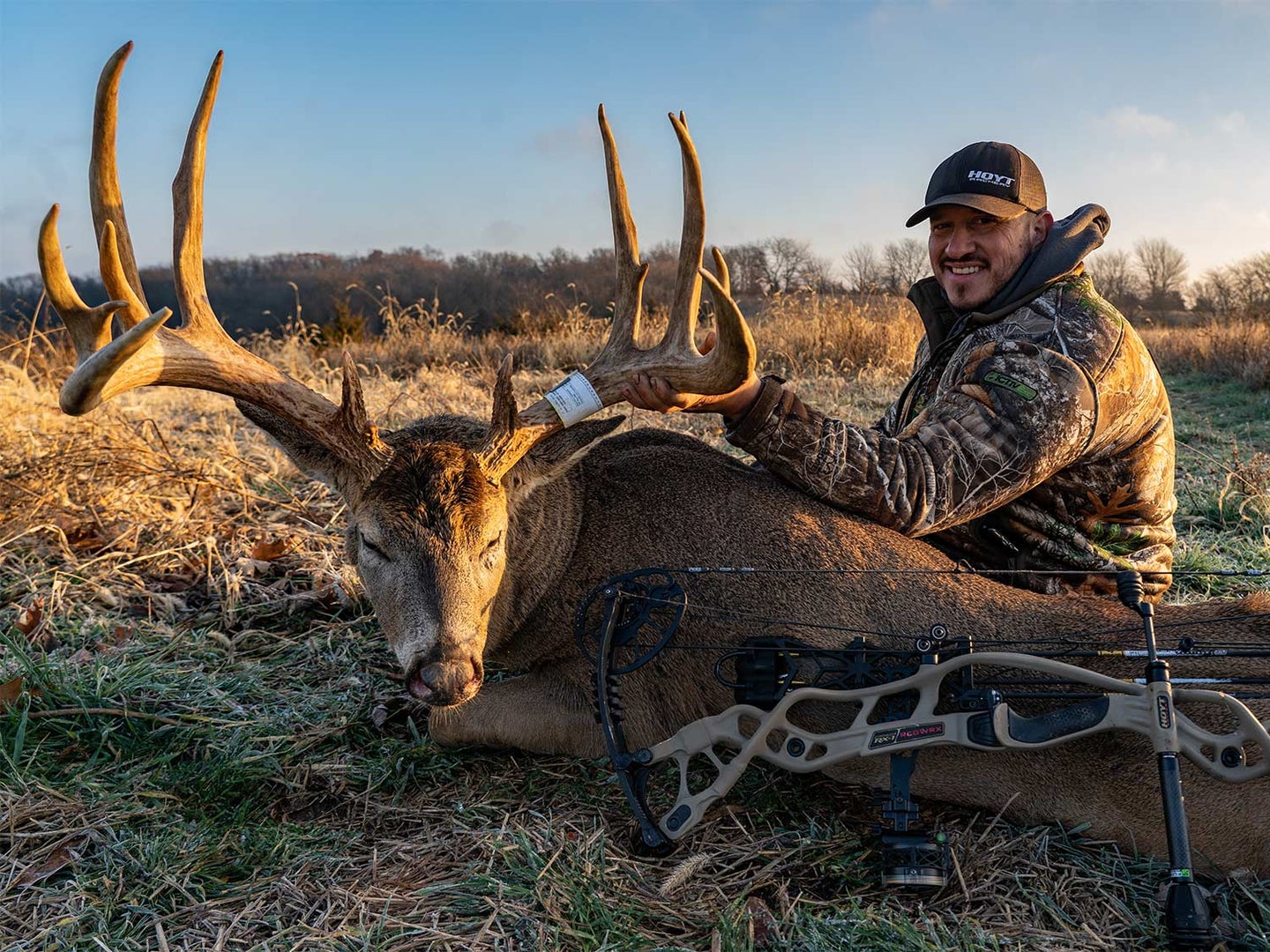 It takes a lot for a buck to be special in Iowa. A land of true whitetail giants, the convergence of genetics and abundant nutrition makes for a preponderance of big deer. Even so, 200-plus inch bucks are still a relative rarity that few hunters will ever see, much less get the chance to harvest (on their own property to boot). When the buck dubbed GQ by Dr. Lee Abraham’s wife first appeared on trail cameras on his Iowa farm three years ago, it was clearly a gorgeous, albeit standard, Iowa buck that needed more age. There was little to suggest he would quickly attain the size and majesty he did. —By Lee Abraham as told to Doug Howlett

But with last year’s sheds of the buck in hand, Abraham was blown away when trail cam photos beginning in March and on through the summer revealed how much this beast had grown in just one year. Even then, Abraham, whose passion for deer hunting led him to become the majority investor in 41 North Media and Midwest Whitetails, wasn’t sure he’d shoot the buck if he got the chance. Abraham only seeks to take bucks that are at least 5½ years old and given the bucks relatively slim body, he wasn’t so sure he was that old. Then he began to hunt him and saw the buck in person. This is his story…

We knew GQ was a beautiful deer with lots of potential, but i didn’t expect him to get as big as he did in one year. We found his sheds last year and then starting in March we picked him up on our trail cameras where I watched him grow inch after inch. He just kept getting bigger and bigger, and then he got his splits. I was just amazed at what he was doing in the one year of growth.

So, my cameraman, Josh Sparks, and I started to put together a plan for this buck going into the fall. We wanted to wait until the rut was kicking in to give us the best opportunity at seeing GQ, so on Oct. 29, we began hunting him. The first hunt using a Hoyt bow was for three days. I saw him on Oct. 31 for the first time this year. He was 120 yards away and the mass on him just blew me away.

I could tell a huge change in his demeanor. In just one year, he was not just a bigger buck, but a much more cautious buck, deliberate in his movements. Last year he had been just fearless—ran into any rattle to check it out. Even then you could tell every other deer he was around respected him purely for the size of his headgear. I never got a shot and after those three days, I had to return to work.

We got more pics of him after that for six straight days. He was just walking around, looking for does. I was finally able to get back out in the woods Nov. 20, and saw him that first day. He was with a doe. But the next evening we saw him by himself, walking. He was out a ways and downwind so I let him go on past our wind before rattling. But he turned and came right back in with the wind in his face.

Read Next: You Can Shoot a Giant 46-Point Buck (Even When You Do Everything Wrong)

I ranged him at 43 yards, but he was wary and alert. His nose was twitching, and he was very aware something wasn’t right. I could’ve taken a shot. He was well within my range, but with him so alert, I didn’t want to risk the shot.

Over the next days we spotted him with does. We had snow one day and rain the next. I was beating myself up for not taking the shot when I had it. I guess all hunters start to second-guess the decisions they make when they don’t turn out like you want. Filming a hunt in that kind of weather is a challenge because you can’t really sit in a pouring rain and run a camera, so Josh had to set up at a distance in one of our blinds and film me on my lock-on just huddled up, doing my best to blend in with the tree—and the rain.

The next day, we spotted him about 3 p.m. He was 300 yards away, and when I rattled, he just looked and headed the other direction. We were in the same stand where he came in suspicious a few days earlier and I realized I couldn’t call to him from that stand again. He knew something wasn’t right in that area, and he wasn’t going to come in.

Josh suggested we make a move right then and that decision turned out to make all the difference. We use Cuddeback’s Cuddelink system of cameras to provide us with lots of intel on deer movement on the farm, and we knew from the images we had collected over the past weeks that he always hit this one rubbing post as he entered a plot planted with a blend from Frigid Forage. He would cruise by looking for feeding does. Using that information, we set up on a stand near that plot hoping to catch him before dark.

Read Next: Is Ohio the New Best Whitetail Hunting State?

It was getting a little later and coyotes started coming out. When things finally happen, it’s amazing how quickly they can unfold.

Everything was quiet when suddenly two yearlings came barreling down the hill to the left of us. We first thought it was a coyote spooking them. But then I saw him! Another yearling dashed by and right behind her was GQ. He was looking for does coming into late estrous.

He was about to run right past my stand, so I drew and grunted loudly twice with my mouth to stop him. On the second grunt it stopped him just briefly as he looked up and saw me. His eyes went white, and I let the arrow fly. But my arrow flew a little wide, and I hit him back more than I had planned. He took off running into a steep ravine 40 yards away where we heard him crash. He never came back up the other side.

Usually, after a shot, I can remember my sight picture and everything about the shot, but now my mind was blank. I couldn’t remember anything this time. It happened so fast. Looking at the footage from the hunt, you can hear my breathing coming heavy and fast from the excitement.

We knew he was still down in the ravine and felt like he should be dead, even with the shot. But also knew there was a chance he was just hunkered down. Normally, we would’ve waited longer to get down and check, but we were losing light and in case I needed to make another shot, I wanted to have enough light to do it. So, we took the chance after 15 minutes and eased over to the ravine.

He was piled up in the bottom, dead. It was such a sense of relief. We quickly got down to him. It was unbelievable. Touching those antlers and looking at them up close. I was even more amazed at his size. Even the trail cam pics and seeing him in the field didn’t compare to how big he truly was up close. As we measured him, compared to his sheds from the previous year, he had grown a whopping 46 more inches in a single year and measured out to 204 inches. GQ is by far the biggest deer I’ve ever killed and may ever kill. It was just such a blessing.

The previous winter had been extremely mild and there was plenty of food, which made for great conditions for deer to grow bigger. But 46 inches? How a deer can get that big in a year’s time is just unbelievable.

We hunted GQ for 10 days before finally tagging him just before Thanksgiving. I’ve put a lot of work into my farm over the years and the deer here get very little hunting pressure and have plenty of food, which makes for great conditions for deer to grow big. This hunt wouldn’t have happened though had Josh not suggested we move in the middle of our afternoon hunt. It was a bold decision common hunting wisdom would’ve suggested you don’t do until another day, but it made all the difference.

Editor’s Note: You can watch Lee Abraham’s quest for his 204-inch monster on YouTube on the Midwest Whitetail page.