"This is what the Coast Guard trains for" 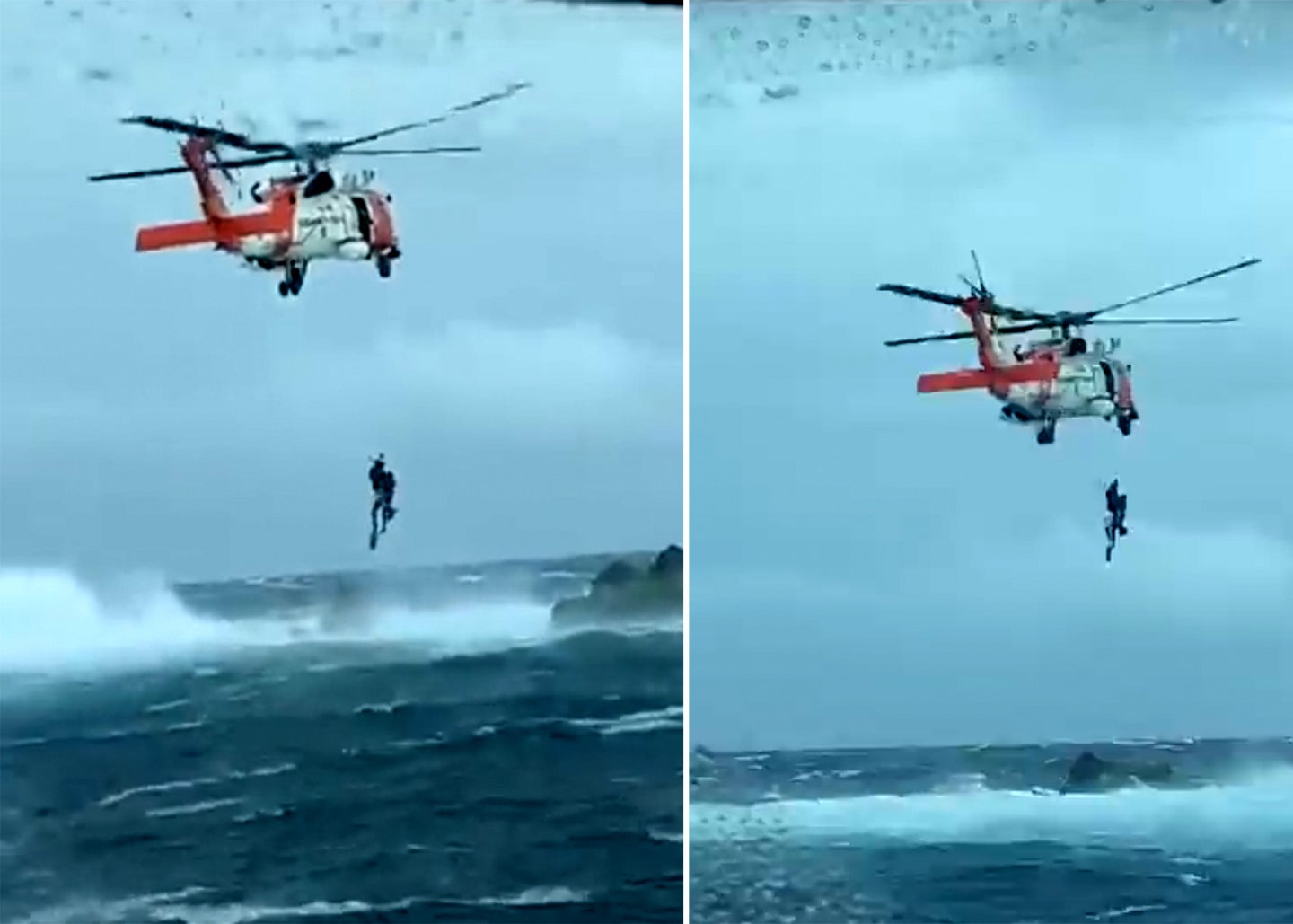 A rescue swimmer hauls up the injured fisherman as the waves crash against the rocks. U.S. Coast Guard
SHARE

An injured fisherman was rescued by a helicopter crew with the U.S. Coast Guard 7th District on Sunday, Sept. 4. The 50-year-old man had gotten stranded on a rock pile off Dog Island in the U.S. Virgin Islands, and he was caught in heavy seas as Tropical Storm Earl battered the rocks with high winds and large waves. The USCG recorded multiple videos of the rescue and shared the footage on social media.

According to the Coast Guard’s report of the incident, the man was fishing with a friend aboard his 26-foot boat on Sunday morning. Sometime before 8 a.m., the man got out of the boat to spearfish around the rocks off Dog Island. Around that same time, Tropical Storm Earl was gaining strength in the Caribbean and moving west-by-northwest toward the island. The tropical storm brought high winds up to 65 miles per hour and six-foot waves, which quickly overcame and injured the man on the rock pile.

Watching from the boat nearby, his friend called 911 and spoke with emergency responders in St. Thomas, who relayed the distress call to the USCG. The Coast Guard sent out a 33-foot boat from St. Thomas along with an MH-60T Jayhawk helicopter from Air Station Borinquen in nearby Puerto Rico.

At first, the boat’s rescue crew tried to get a line to the injured fisherman, but the large waves crashing on the rocks prevented the vessel from getting close enough to reach him. The USCG helicopter moved in and sent down a rescue swimmer, who used a harness to hoist the survivor up from the rocks. The helicopter crew then transported the injured fisherman to St. Thomas, and he was eventually transferred to the Schneider Regional Medical Center for treatment.

“This was a challenging case in a tropical storm with heavy seas, gusty winds, and low visibility, but this is what the Coast Guard trains for,” said USCG aircraft commander Lt. Shea Smith. “Fortunately, the survivor was able to hang on until we could arrive and we are all glad that he is safe.”

Read Next: Coast Guard Rescues Shark-Bit Fisherman in the Bahamas, Credits Tourniquet for Helping Save His Life

Earl was upgraded from a tropical storm to a hurricane on Tuesday night, according to the New York Times, making it the second hurricane of the 2022 Atlantic season. Hurricane Earl was moving north toward Bermuda and traveling at approximately six miles per hour as of Wednesday morning. Forecasters with the National Hurricane Center expect it to strengthen into a major hurricane by Thursday.