10 Myths About Hunting Bears Over Bait

Mistruths and misconceptions about bear hunting 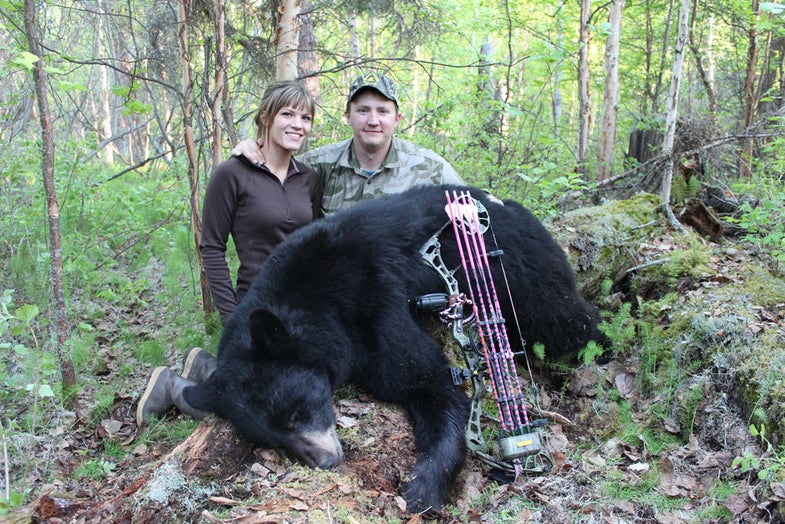 The author's wife with a black bear she took with a bow.. Tyler Freel
SHARE

Hunting bears over bait is one of the most hotly debated methods in all of hunting. Much of the argument occurs among hunters themselves. There are those who do it and love it, and those who despise it. In the age of social media, the debate can get heated. And within this debate, there’s a lot about bear-baiting that is misunderstood and misconstrued—usually by those who have never tried it themselves. With that, here are 10 myths about bear-baiting, debunked based on more than a decade of hunting black bears and grizzlies in my home state of Alaska.

1. Hunters just dump donuts in the woods and shoot a bear

Granted, donuts can be a great “eating bait” for bears, but the reality is much more complex than simply making a bait pile. To have a productive bait site, there are several factors that must line up. First, there must be a good number of bears in the area. If the area doesn’t have a lot of bears, you could dump a dozens of donuts out there and still be wasting your time. The only way to know if there are bears in the area is to scout it. Second, a productive bait will almost always have a good call scent, as well as food bait. To get bears to use a bait site, they need to be able to smell something they want to check out from miles away, as well as something they like to eat. Lastly, setting a consistently productive bait takes a lot of planning, research, and strategy. You need to know how the prevailing winds work at each specific site and have an understanding of how the bears move through the terrain. All of this takes thoughtful time spent in the woods.

Spot-and-stalk hunting is a great method and I’ve hunted brown bears this way. However, there’s a misconception that spotting and stalking game is the most elite form of hunting. Every hunt is different, and sometimes a spot-and-stalk mission is extremely challenging, but just as often, it works out stupid easy. In the right terrain, with a lot of bears, you will usually have as many or more chances at bears by spot-and-stalk than with bait. Just as with spot-and-stalk hunting, bear baiting takes woodsmanship (see myth no. 1) and it requires a lot of patience (more on that soon).

Another common misconception is that baiting bears is for hunters who are too lazy to go find one and sneak up on it. On the contrary, setting and maintaining a productive bear bait typically requires more time and work than any spot-and-stalk hunt I’ve been on. It may not always involve leg-burning climbs up mountains, but it takes equal dedication over a much longer period-of-time. Where I hunt in Alaska, we run tens of miles upriver to set our baits. You’ve got to have some real determination (and skill navigating a fast-running spring river) just to get to my bait sites. And where we can’t run the river, we backpack the baits in.

If you think hunting bears over bait isn’t fair-chase, well, Boone and Crockett, Pope and Young, and every other major conservation and recording organization I can think of, disagrees with you. There’s a lot for a bear to eat in the early-summer woods. He doesn’t have to hit a bait site to survive. Plus, the bear still has his incredible senses of smell and hearing to detect you. If anything about a bait site seems suspect, he can simply move on to the next food source.

5. It makes it too easy to kill big bears

Big bears get big for one of two reasons. One, they are not hunted at all. Two, they are smart. Every year there are big bears that I get trail cam pictures of, but never see in the flesh. Even when all the conditions are right, some bears just know something is up, and won’t show, or only come to the stand sight after dark. Even when you have a big bear showing up at a bait site consistently, everything must be just right—and that’s just talking about black bears. Hunting a big, mature grizzly bear on a bait is like hunting an old, mature whitetail, but one that is spookier, has a better sense of smell, and can kill you. Spook him, and he’s usually gone forever.

Bears are difficult to judge, and if you only have a few seconds to decide to shoot, you have a much greater chance of killing a juvenile bear or a sow rather than the mature boar we’re all after. Hunting a bait often gives you enough time to judge the bear and make sure that it’s mature. It also gives you time to select a good shot to take at a known distance (which is extra critical for bowhunters). Done correctly this means taking a mature animal with a quick-killing shot, and that is our highest ethical responsibility in any hunting scenario.

7. It turns the woods into a dump

A big black eye on any hunter is being guilty of trashing the woods. Unfortunately, there are bad apples in every bunch, and some hunters who use bait do leave trash in the woods. The truth, however, is that the vast majority of folks running bear baits do not leave trash. Here in Alaska, (as well as some other states) it is required to clean up your site and remove contaminated dirt at the end of the season. As with any other type of hunting, bear baiting goes much better when hunters follow the rules.

Some folks argue that baiting bears creates bears dependent on people—ones that will cause problems, because we all know we’re not supposed to feed bears. This could be a possibility if you were baiting right behind the local dump, but in most cases, baiting within a certain distance of dumps or houses is illegal. I’m sure bears appreciate the free food in the woods, but it’s not there long enough to make them dependent on it, and they go about their business as usual once it’s gone. There are a lot of bear baits in the unit I live in, and I can’t remember the last time I heard of a bear getting into someone’s garbage. It is a rare occurrence.

Read Next: Tips and Tactics on How to Hunt Black Bears

I won’t lie to you and say that hunting bears on bait is always as taxing as a 10-day Dall sheep hunt, however, it can be tough. Sitting absolutely still for hours when it’s cold and the bugs are biting you is not an easy task. There are plenty of folks who can’t hold still for 15 minutes, never mind 8 to 10 hours. It’s a different kind of physical challenge, and if climbing to the top of mountains for 10 days is the only measure of whether or not a hunt is physically demanding enough, then most popular types of hunting wouldn’t make the cut. If you can’t sit still and endure some discomfort, you’ll have a hard time in a bear stand.

One of the most common things I hear is that a hunter would be bored if they were to sit in a bear stand. Some of the time, yes, it’s boring. So is stretches of whitetail hunting. However, sitting a bear stand opens up a whole different world. Waiting quietly, without moving, will allow you to hone your predator senses and hear things you never would pay attention to otherwise. After a while, one twig snap tells you a bear is coming. It’s an exercise in patience, but when the right bear finally comes in, I get a surge of adrenaline unlike anything I’ve experienced on a spot-and-stalk hunt. The excitement is hard to put into words. The only thing I can say is that you should get out there and try it for yourself.