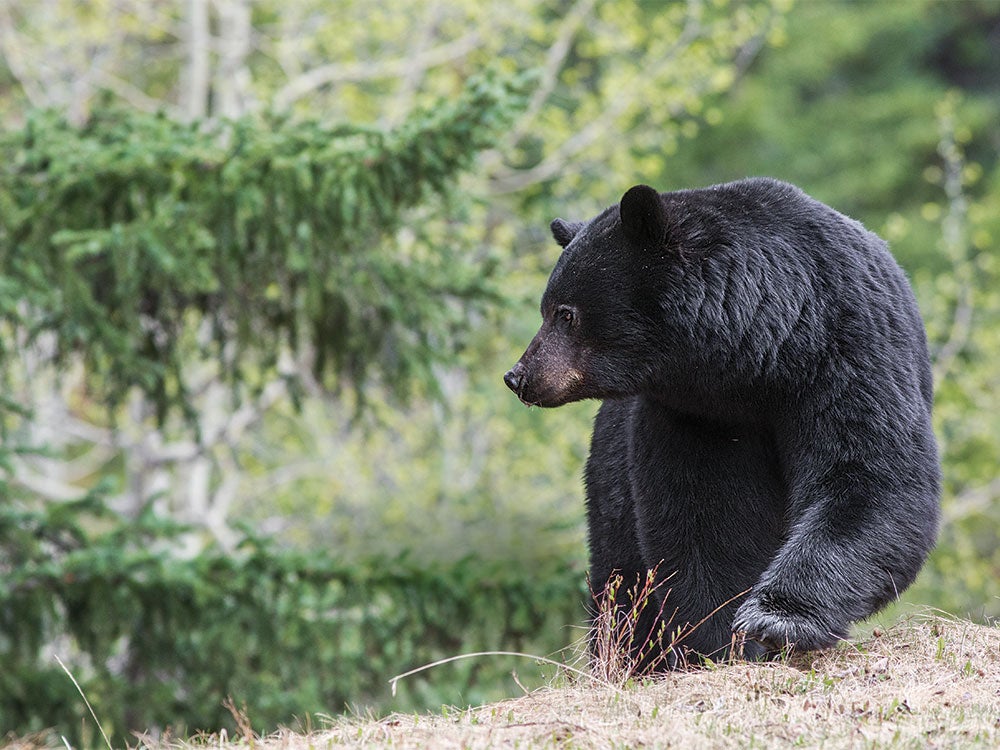 A good-size mound of bear poop lay on the shoulder of the logging road, and Chad Miller swerved his truck to mash it. “That’s a master guide’s trick right there,” he said. “Any pile with a tire track through it is old.” He took a long pull from an energy drink. It was almost 8 p.m., with a few hours of shooting light left in British Columbia. We’d been driving and glassing logging roads since 11 that morning, and a surprising amount of our downtime was spent seeking out, running over, and discussing bear droppings.

Some roads didn’t have much fresh sign, but those that did warranted special attention. We’d frequently stop on these and sneak into green meadows and clear-cuts to glass for feeding bears.

“Man, that one there was a big old pile,” Miller continued, tightening his grip on the steering wheel. “Probably from a real turd-kicker.”

Miller owns Miller’s North Outfitting in Alberta, which is mostly a whitetail outfit. But he also guides bear hunters every spring for Milligan Outfitting in B.C. With 18 years of guiding experience, he has devised a size-classification system all his own for black bears. The turd-kickers are the giant boars for which B.C. is known. They are not to be confused with the smaller boars and sows, which get a pass.

B.C. has one of the highest densities of black bears in the world, and they’re as difficult to field-judge here as anywhere. Baiting is illegal in B.C., so you don’t have the luxury of a 55-gallon drum full of doughnuts for a size reference. And B.C.’s hunting regulations cite juvenile bears younger than two years old, plus sows with cubs, as off limits. Beyond that, most hunters who travel to B.C. want to kill a large, mature bear, not just a legal one. So, being able to size up a bear based on body characteristics is especially important here—but tips from a guy like Miller are useful to black bear hunters everywhere.

He’s Got a Pair

Not every step of field-judging a bear is a mysterious art. “There are some big sows out there,” Miller says. “So when we spot a bear, one of the first things I try to look for is, well, a set of nuts. Usually, you can tell a sow apart by their other body characteristics too—but not always. If I’m glassing a bear that’s calm and feeding, I like to get a view of its rear end. Then you can be 100 percent certain whether you’re looking at a boar or not.”

You can discern the most about a bear’s size with a broadside view. Smaller boars and sows will have a thinner look in a few key areas. “You want the entire body to have sort of a square appearance. Big boars usually have a sagging belly, and their front shoulders will seem to be a little more elevated than their rear end,” Miller says. “Sows will have more of a tapered appearance, with lower front shoulders, and they’ll often look larger on the rear end.”

If a bear is walking, Miller also pays close attention to the legs and ankles. “Sows and small boars will usually have legs that taper into a thin wrist at the pads,” he says. “Big boars look like they have cankles; their legs will be just thick and straight, all the way to their feet.”

A big bear’s head will have a wedgelike appearance with a squared-off nose. And since a bear is scored by the size of its skull, many hunters like to use a bear’s head as a yardstick for its overall size. But Miller says to be careful of that, because a bear that looks to have a big head can be deceiving.

“If the bear seems to have a large body and the head is proportioned to it, it’s usually not a great big boar,” he says. “The biggest ones seem to have a head that actually looks small on the body. And always look at the ears. If the ears seem small for the head and are sticking off to the side rather than sticking up, it’s a pretty good sign.”

“Big bears are the opposite of big whitetails, which just get warier as they get older,” Miller says. “When bears are young, they’re scared of everything. They’ll usually take off as soon as they see a truck. But big boars get cocky as they get older. Once they reach a certain size, they know not much is going to mess with them. A lot of the time, you can drive right past a big bear, get a good look at him, and he’ll barely even look up from feeding. That’s a good situation for a stalk. You can get past him, get the wind right, and then sneak right in on top of him. It’s pretty exciting. We guide a lot of successful archery hunters that way.”

Even with Miller’s checklist, no two big boars look exactly alike. During the week, we put eyes on numerous animals that had us on the fence—and being on the fence is one of the biggest cues of all. “Don’t second-guess,” Miller says. “If you’re hunting for a truly big bear but are looking one over and trying to talk yourself into shooting, it’s probably not the animal you’re after.”

With that in mind, about an hour before dark, we were cruising down a stretch of muddy logging road that paralleled a fresh clear-cut full of new growth. We spotted a lumbering black form just off the shoulder. By the time I focused my binoculars and noticed a sagging gut, Miller was already hissing, “He’s a giant. Grab your rifle!”

I eased down the edge of the logging road for a perfectly clear view of the boar and set up for a 100-yard shot. The bear looked my way but didn’t seem to care that I was around. I hit him right on the point of the shoulder and dropped him where he stood.

He was indeed a beast of a bear with a thick coat. (And for a spring bear, he was fat too, which helped when I made a batch of barbecue sliders out of him the next week.) He was just the caliber of animal you dream of encountering in B.C. Looking him over and reliving the experience, we all trembled a bit with leftover adrenaline. A bear that leaves no doubts will do that to you.

Read Next: How to Decode a Black Bear’s Body Language

Miller has seen a bunch of bears shot, including grizzlies, in his travels as a guide. His favorite bear round is the classic .300 Win. Mag.

“You don’t need a huge hard-cast bullet to kill a bear,” Miller says. “They have thin skin. They’re a lot of meat and fat with a few big bones. But they don’t bleed a lot. I like a high-velocity round that inflicts a lot of shock, and a .300 does that. It’s a great close-range gun, with enough punch to do the job at a distance too. The recoil isn’t bad, and most guys can shoot it pretty well.”

I was using a Winchester XPR (shown above), which in my opinion is one of the best bolt-actions on the market for the money, and Winchester Expedition Big Game Long Range ammo. With 190-grain AccuBond bullets, it packs plenty of punch—even against a serious turd-kicker. —W.B.