On his way to a state-record buck, a Michigan hunter gets a graduate degree in deer behavior 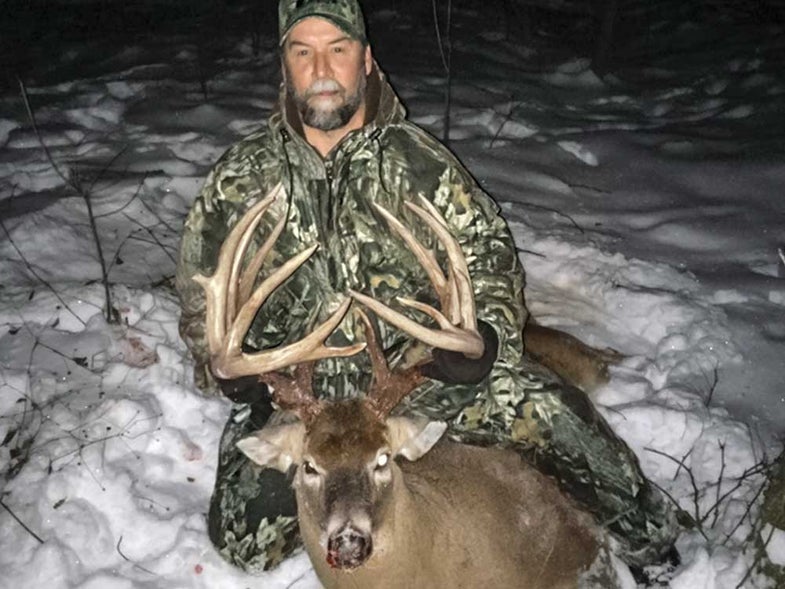 Chet Kulikowski is an ordinary hunter who had the opportunity to hunt an extraordinary deer. In December 2016, he ended a two-year quest for a buck that would become Michigan’s new crossbow state record. Bagging the buck—which he called Rib Cage, for the wall of tines rising from its main beams—was the culmination of Kulikowski’s education in deer behavior.

Here’s what he learned from hunting a single remarkable buck—more or less exclusively—for two years.

Kulikowski, who hunts semi-­rural country in southeast Michigan, first captured trail cam images of the buck in the fall of 2015. But Rib Cage wasn’t like other bucks.

“I could not figure this deer out. I couldn’t pattern him at all. I didn’t know where he was living. I was getting trail camera pictures of him off and on, but they were all at night.”

Kulikowski focused on the buck throughout the remainder of Michigan’s deer season, but he didn’t see Rib Cage in person for a full year.

The Takeaway: Mature bucks, especially those living in heavily hunted areas, often use multiple core areas throughout the year. Because Kulikowski most frequently captured images of the buck during the state’s gun season, it’s likely the deer had identified the area Kulikowski hunts as a safe zone—a theory further supported by the fact that the locale is bowhunting-only.

“This buck never just came barging in. He was always cautious, always sneaking in. Even when I shot him, he was on high alert, knowing that something wasn’t quite right.”

Kulikowski figured he’d need to adapt his hunting tactics if he hoped to get a shot at the recluse. He also discovered a key detail. “When I was seeing other deer—does, fawns, smaller bucks—I knew I wasn’t going to see Rib Cage. He didn’t come around when other deer were there. Understanding that helped me to visualize the circumstances in which I’d finally encounter the deer, and what I would do when he did show up.”

The Takeaway: When you put intense focus on a single animal, you begin to understand that each deer has its own personality. By adapting your tactics to that deer’s individual traits, you increase your odds of success.

“Once I found out that buck was around, I never, ever went to the woods without first taking a scent-free shower. I had been sort of aware of scent control but had never taken it to that level before,” he says. “I swear by it now because I saw more deer, and they had no idea I was around.”

Kulikowski also paid more attention to his entry and exit routes than ever before. His blind locations were more carefully chosen as well.

The Takeaway: The little things can add up. In his pursuit of the giant, Kulikowski had more encounters and interactions with deer than he had had in previous seasons, and they were at close distances, enabling him to really watch behaviors. The focus on details like minimizing his scent and impact, and allowing the conditions to dictate his actions, not only helped him tag a state record, it helped normalize practices and methods that put more deer in front of him.

Kulikowski went nearly 12 months without evidence that the multi-tined giant was still around. Then, when he finally encountered Rib Cage, Kulikowski missed a gimme shot, whiffing midway through the November gun season.

The Takeaway: Kulikowski had plenty of reason to give up on the chase, whether it was a lack of confirmation that the buck was still alive or the belief that a blown opportunity would make the buck avoid his hunting area. Quitting would have been easy. Instead, he stuck it out. The result? A buck that tops that venerable 200-inch mark, and a whole lot of lessons that have made him a more effective deer hunter.