Brennan Morris connected on this massive Louisiana buck with a crossbow 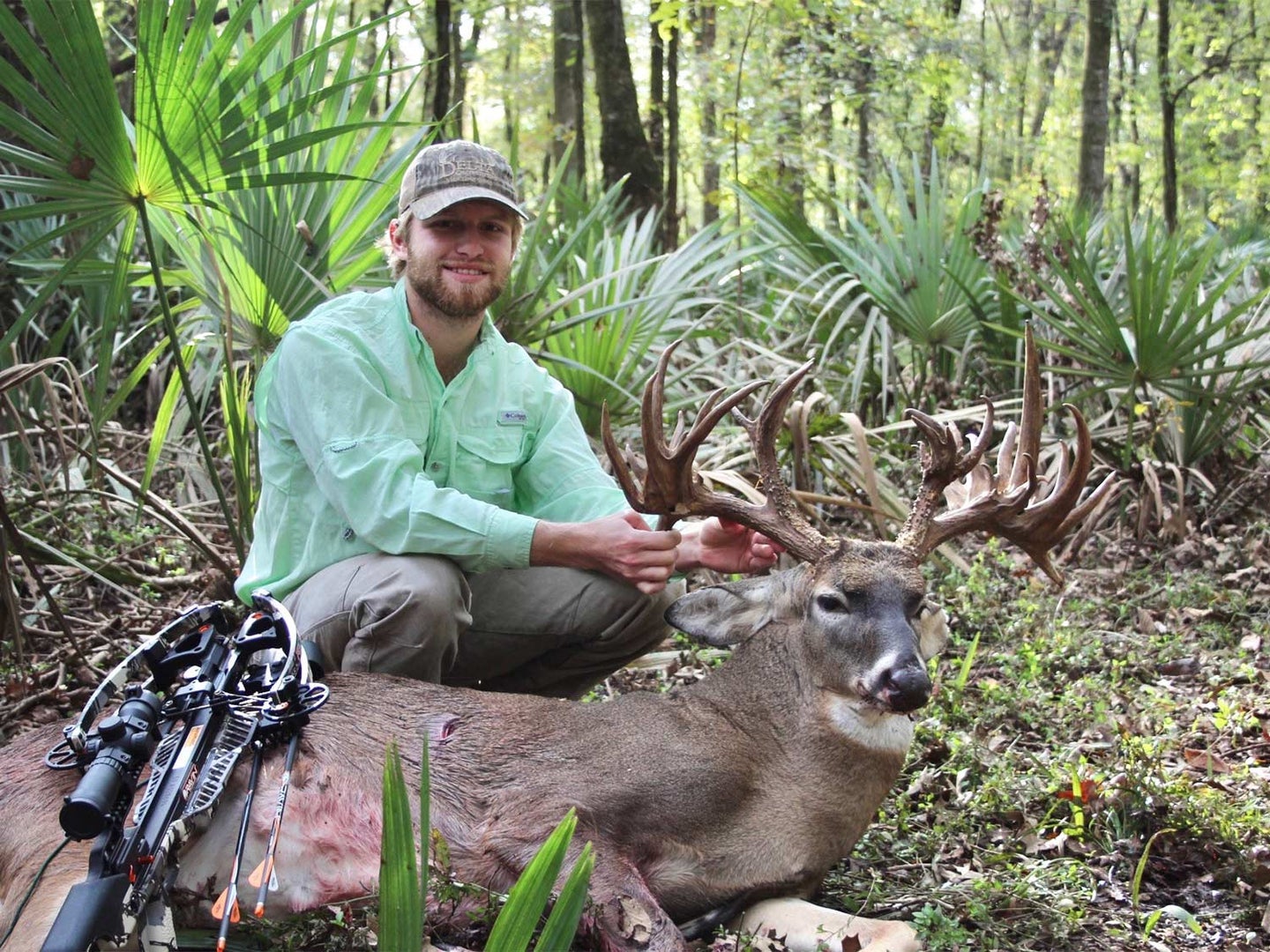 On November 5, a young Louisiana hunter with just a couple hours to hunt before starting work, climbed into a stand in an area where trail cams had captured a big buck just days before. It was a buck he and his hunting companions had been tracking for several years and suddenly he was back on the camera after not being seen for awhile. The hunter got into the stand with the thin hope of spying the creature on the hoof. What happened next may well change the record books for whitetail deer in the state known as the Sportsman’s Paradise. Here is his story. —Brennan Morris as told to Doug Howlett

I did everything wrong. Everything they tell you to do to kill a big buck? Well, it seems I did the opposite. I didn’t mean to. That’s just the way it worked out.

The property is roughly 3,000 acres and we have farmed it and hunted it for eight years. I killed my first deer when I was five-years-old and have killed enough deer that unless it’s a good-sized buck I’ll let it walk. We try to only shoot bucks that are at least 5 ½ years old or older. Until this year, I probably haven’t killed a buck in five years.

This buck first showed up on our trail cameras three years ago—getting bigger every year. Considering how big he was when we first caught him on camera and catching him on the camera these past few years, we figured he had to be at least 5 ½ now. The problem was, he hadn’t shown up in any of our photos during the early part of this season. Suddenly he was gone. I worried he had gotten hit by a car or got sick and died somehow.

Then, on Sunday, November 1, he showed back up on camera. He was in the same area we had seen him in previous years, an area that has been known to produce good bucks in the past. The camera was set up about 100 yards off a creek and close to what we thought was a bedding area. It was a good travel corridor for bucks as they moved between feeding and bedding. We knew the clock was ticking—he might not be around forever and a logging crew was set to come in to begin clear cutting the timber.

One of our friends and hunting companions, Dakin Hines, had set a ladder stand in the area along with the trail camera but he wasn’t able to hunt Monday. Since it was his stuff in there, no one else wanted to hunt it either until he could. Dakin was working Tuesday morning, too, and of course, the buck showed up on camera around 6 a.m. that morning, just before sunrise. He called me that day after seeing the deer on camera and told me he would be mad if someone didn’t hunt the stand that evening as he still had to work. At his urging, I hunted that evening bud didn’t see anything. Dakin took the morning off from work Wednesday and sat the stand with the same result. My brother Logan hunted the area that evening but didn’t see anything either.

Dakin had to work Thursday and told me I should go in there the next morning since I was working in the area. Logging was scheduled to begin and we also knew with the rut approaching (the area’s rut doesn’t really kick in until early December) that he could easily wander somewhere else.

So, Thursday, November 5, I decided to go early and hunt for an hour or two until I had to get back on the tractor for the day. With all the rain earlier in the year, we were really busy so I hadn’t even had a chance to get out and hunt. I normally bowhunt with a compound bow, but again, we’d been so busy, I hadn’t even had time to pick up a bow and practice, much less hunt, so I didn’t feel right going out and trying to shoot a deer—especially a deer this big—with a compound when I hadn’t been practicing. The last thing I wanted to do was wound it.

My only option was to borrow my uncle’s crossbow. He has shoulder troubles so he bought a Ravin crossbow a few years ago. I had helped him sight it in when he first bought it so I had some history with the bow. I hadn’t shot it since, but I was confident I could make a shot with it just like shooting a rifle.

Everything started wrong that morning. I was running late getting out there and hadn’t dressed up in camo or made sure everything was scent free. I was in my jeans and a t-shirt and just threw a camo jacket over it since I knew I would have to begin work right straight from hunting.

I got to the farm and scrambled into the stand and then realized I hadn’t even taken time to cock the bow. It was noisy when I did and to make matters worse and I dropped the arrow. It fell down the stand’s ladder making all kinds of noise. I only had one other arrow in the stand with me so I loaded that one and sat there just mentally kicking myself.

It was different sitting on the stand that morning. Knowing such a buck was in the area, it felt like I used to feel before a game. I sat, ready and alert the entire time. I didn’t have long to wait long.

Barely 20 or 30 minutes after getting settled, I heard crunching coming up behind me in the palmettoes. Then everything fell quiet for about 10 minutes. I was worried he winded me.

After some time passed, I turned my head and was shocked to see him standing right next to me, 20 yards away. He moved like a ghost, not making a sound. But then he stopped with most of his body obscured by several large trees. I thought he smelled where I had walked in and was going to blow out of there. He stood there for what seemed like forever. I was freaking out; my heart was beating out of my chest. I was trying to calm myself down by closing my eyes.

But then he stepped forward just enough for me to get a shot. I squeezed the trigger and it made a click. I had forgotten to turn the safety off.

The buck’s head spun my direction. He was looking right at me as I unshouldered the crossbow because in the moment I couldn’t even remember how to turn the safety off. I clicked it, aimed and fired just before he began to run. The arrow tipped with a Rage Trypan hit and he ran off into a large thicket where I heard him crash.

I knew he was down.

I immediately called my brother who was working out there as well. It was about 6:50 in the morning. I then called several other friends who I knew would want to know the buck was down. I sat in my stand shaking and actually got sick. Throwing up off the side of the stand. I used to get nervous when I played football in school, but never felt that way,

I finally climbed down. Walked to where he had been standing when I shot and confirmed the blood where I had hit him.

The buck had 46 scoreable points. There was just junk sticking everywhere. The trail cam photos hadn’t done this buck justice. We knew he was big, but we never realized how big. Buckmasters scorer Cecil Reddick scored him on the Buckmasters score sheet at 309 6/8. The current Louisiana record is only around 221 inches.

I still can’t believe it. Most bucks shrink once they hit the ground but this one seemed to grow. His rack was much bigger than anyone ever imagined, though his body was probably only about 200 pounds. He actually looked like he may have been sick.

The day after shooting the buck, the logging crew moved in and began clearcutting the area. We had gotten him just in time.