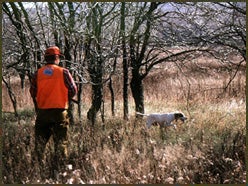 Access is remote and the hiking can be hard. Towns are scattered and motels are scarce. This is the land that Daniel Boone once gazed upon after traversing the Cumberland Gap, which connects Virginia and Kentucky. The land was rugged with dense forests and deep valleys. That was more than 200 years ago, yet much of the old frontier around the eastern Kentucky town of Boonesboro remains intact and teeming with game, thanks to the preservation of the Daniel Boone National Forest.

Marked by steep forested ridges, narrow valleys and more than 3,400 miles of cliffline, the 700,000-acre forest is still one of the South’s top hunting grounds. For Kentucky grouse hunters there is no better public tract.

Hunting grouse Southern-style means climbing remote Appalachian hills in the quest for pockets of secondary growth. The hike in search of game could be futile, but the Daniel Boone National Forest has two special grouse-management zones to assist hunters. A good place to start is within one of these two zones.

The Somerset Ranger District, which includes McCreary and Pulaski counties, is home to the 6,004-acre southern grouse-management zone. According to U.S. Forestry Wildlife Biologist Joe Metzmeier, the grouse-management zone features 10- to 20-year-old pole-sized timber stands. A recent pine beetle epidemic has also created substantial plots of early-stage growth in and around the management zone. Additionally, don’t overlook edge habitat during the early fall. In particular, hunters should target the edges separating secondary oak and hickory stands, where grouse make their homes, from more mature oak and hickory stands, which provide the birds with an ample supply of mast crops.

The management area is bounded by the South Fork Cumberland River to the west and U.S. Route 27 to the east. Highway 751 leads hunters to forest service roads 858, 856 and 55, all of which intersect the management area.

The northern grouse-management zone is located within the Morehead Ranger District, which includes Rowan, Bath and Menifee counties. Hunters can expect plenty of steep but short hillsides within this 4,728-acre management area. Most of the slopes measure upward of 300 to 400 feet in height. In February of 2003 an ice storm severely altered the Morehead District landscape. According to forest managers about half of the area was affected, with the southern and eastern slopes hardest hit. Hunters can expect to see several downed trees and numerous missing limbs. The diminished canopy has allowed more sunlight to penetrate the forest floor, spurring fresh undergrowth. In turn, grouse populations should benefit.

Since reaching good grouse cover can be taxing, pack a tent, a sleeping bag, drinking water and a few meals for an overnight stay. The Forest Service operates several developed campgrounds, but most of them are closed by the end of October. Therefore, pack light and leave the car behind.

Primitive camping, which is allowed throughout most of the forest, is a great way to explore the land. Campsites must be positioned at least 300 feet from any water sources, developed trails, or administrative sites.