It’s a cinch you’ve never heard of them, but these seven men have likely helped more anglers put more fish in their boats than all the guides in North America. 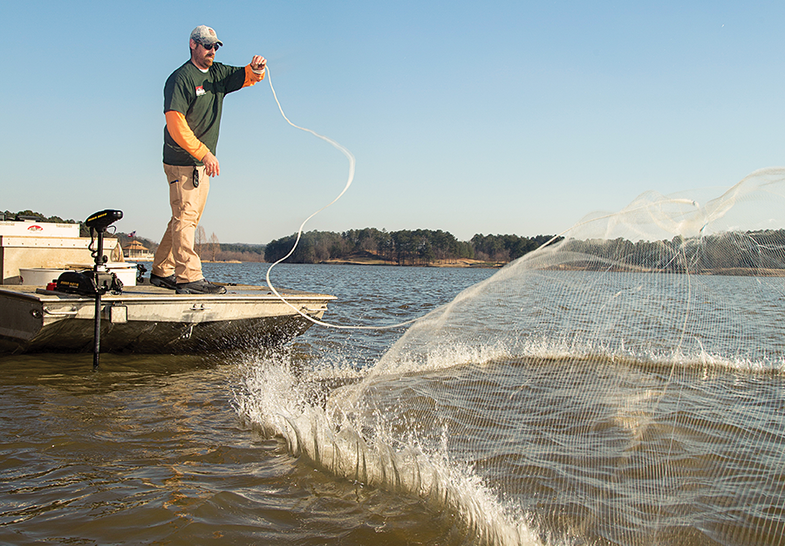 Shawn McNew’s fingers were frozen in the shape of a claw, gripped with the ache of another cramp. It hurt worse than the blisters and tiny, bleeding cuts on his fingers because the 40-degree water had numbed his skin. The muscles would eventually relax so he could continue. They had to, because although he had thrown the 10-foot cast net more than 400 times in the past eight hours, he still needed more shad. He had clients depending on him, and a family of three to feed with the proceeds.
This Acworth, Georgia, entrepreneur has had a lifelong fascination with striped bass and, in turn, with their forage.

“Dad had me fishing before I was out of diapers. We’d use only use live bait for striped bass—shad mainly. By the time I was 8 years old, I was throwing a cast net,” says McNew. The now 39-year-old never lost the desire his father instilled in him on the banks of Georgia’s Lake Sinclair, and it seemed to blossom further while he was attending the University of Tennessee in Knoxville.

“Honestly, I fished a whole lot more than I studied. I started a guide business before I graduated and quickly decided that was what I wanted to do.” But to be a striper guide, you have to be able to catch bait. And McNew had that talent in spades. 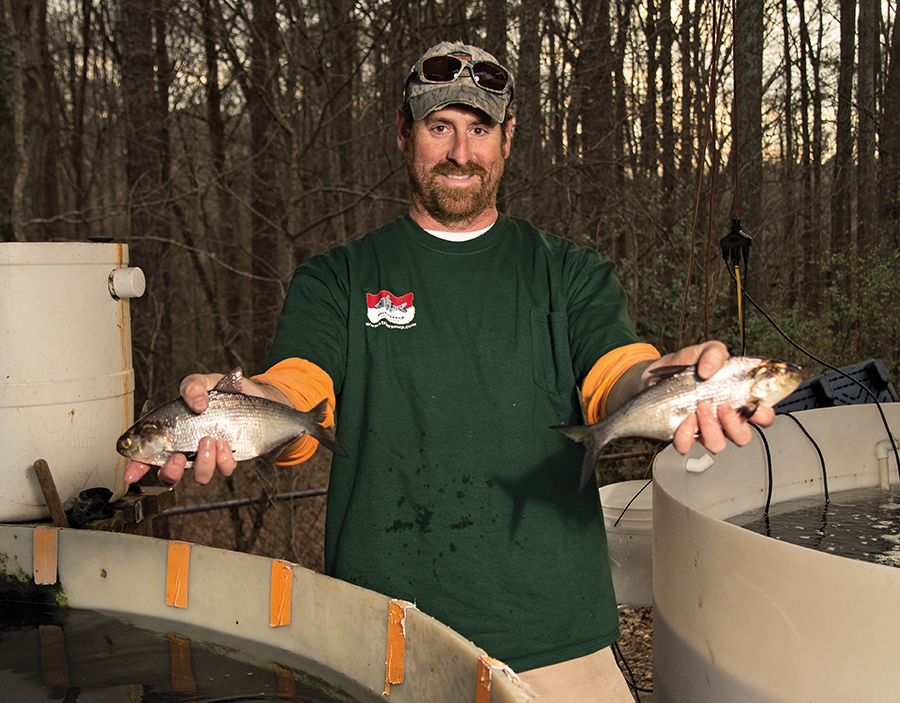 It can take hundreds of throws to fill McNew’s bait tanks.

McNew moved back to Georgia in 2004 after graduating with a Bachelor of Science in fisheries biology, and started StriperSoup.com, an online forum for all things striped bass. In 2012, after earning a reputation for catching shad when nobody else could, McNew decided to become a bait provider and opened a shop. Now he’s not only had a three-year run of always having live shad on hand for anglers, but he also supplies other bait shops in the region (Alabama, Tennessee, and Georgia) with live shad.

“The most important aspect of being a bait supplier is having good sources of healthy fish. So, I’ll drive up to three hours to catch them,” says McNew. Catching healthy fish means nothing if you can’t keep them alive, which is why he built a 170-gallon tank on his boat. He maintains a 70-gallon secondary tank in case the fishing is remarkable or the shad are oversize, and he created what he calls the “shad wagon,” a trailer with three additional 70-gallon tanks. 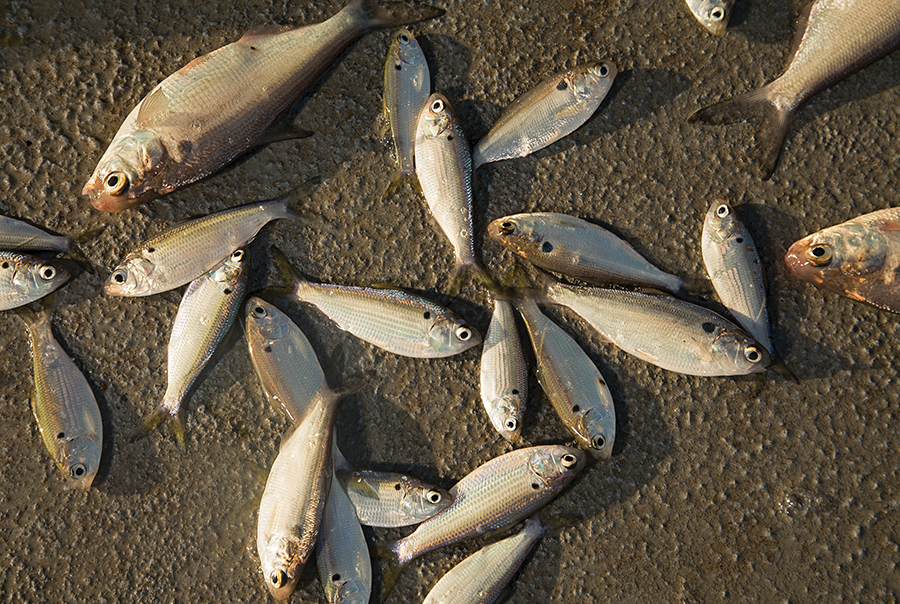 McNew will arrive at the lake at dawn, sometimes after a three-hour drive. Then comes the work. A lot of work. He will throw either an 8- or 10-foot net until he fills the custom livewell, which holds 80 pounds of shad—that’s equivalent to about 6,000 four-inch threadfin or 2,000 six-inch gizzard shad. On a great day, he can be done in an hour, with just a handful of throws. On brutal days, he can be well into his eighth hour and 400th cast without filling his limit.

From April through June, McNew is on the water at least once every weekday—sometimes twice. From July through September, he cast-nets on average four days a week. During the winter months, an every-other-week visit to the lake is all that’s needed. 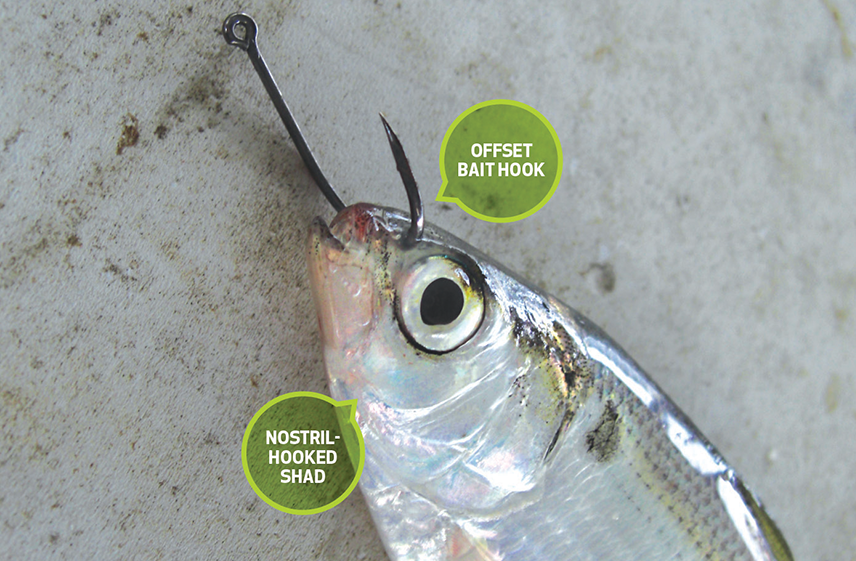 How to hook a Shad

Catch ‘Em Up: “If you’re just starting out, it’s best to use a smaller net. Some guys think that throwing a big 12-foot cast net is more efficient because you can capture more bait with each cast. However, you can cast, dump fish, and reload an 8-footer in 30-second cycles. This means you can typically make four casts in the amount of time it takes to get a 12-footer reset.”

Rig ‘Em Up: “When hooking a live threadfin, go between the nostrils. Lip-hooking is no good because it’s way too easy for a fish to steal your bait. And if you hook one behind the dorsal, it can’t swim naturally and will die quickly.”