Are protected wolves a danger to humans in the West? 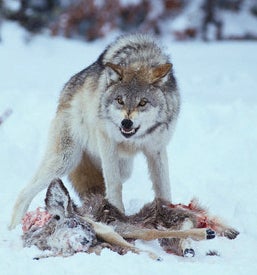 It didn’t make a lot of news at the time, but last spring a black bear hunter in northwest Montana killed the wolf that charged him.

The hunter, Zach Harms, was walking a forest road north of Kalispell when a pair of wolves ran out of the woods and crossed the road in front of him. According to game wardens that investigated the incident, one of the wolves then turned and ran down the road, right at Harms, who shot it in the head at about 10 feet.

Wardens said the wolf was a female in good condition and showed no signs of illness or injury. Harms‚ action was justified, the wardens concluded.

The incident is noteworthy because one of the fundamental assumptions of wolves is that the wild canines fear humans and, as long as they are healthy and given room to roam, reintroduced wolves are supposed to pose no danger to people.

The single high-profile exception to that rule was the November 2005 death of Canadian college student Kenton Carnegie, killed by a pack of wolves at a northern Saskatchewan bush camp. The wolves that pulled down Carnegie were so habituated by garbage at the camp’s dump that they had lost their fear of humans, according to researchers who investigated the grisly death.

But a number of game managers in the West are starting to rethink the notion that wolves are benign. They mention the increasingly brazen behavior of wolves on the margins of valley-floor communities. They point to the number of domestic dogs that are picked out of backyards by wolves and to the number of disturbing reports they have received from elk and deer hunters who are hazed by wolves in the backcountry.

“I think we’re looking a perfect storm for some sort of incident,” said one Montana wildlife official who asked to remain anonymous. “This hunting season we had one of our worst elk harvests on record. Some of that is attributed to poor snow pack that kept elk high and scattered, but some of it is because elk are redistributing themselves to get away from wolves,” said the manger.

“So we have a scenario where we have wolves that are off their preferred feed and are starting to target lower-elevation whitetails. In our country that puts them in pretty close proximity to people. We’re also seeing the average pack size of wolves going up. And pretty much every report we got at our check stations this fall was about wolves. Hunters asking us what we are going to do about wolves.”

Indeed, several hunters this fall have reported having wolves shade them as they carried meat out of the field. None of these incidents escalated to an attack, but one elk hunter outside Yellowstone Park said he was so rattled by his canine chaperones that he loaded his rifle and kept it in his hands as he packed a bull down Buffalo Horn Creek.

Across the state line in northern Idaho, officials have confirmed that the leading cause in the decline of the storied Lolo elk herd is wolves. Previously biologists had thought a combination of black bears, mountain lions, poor habitat condition and wolves were to blame, but a comprehensive investigation of the carcasses of radio-collared cow elk indicates that wolves are by far the main culprits, and are killing so many females that the elk population is in a free fall.

All this comes as the ink dries on a federal judge’s ruling that reintroduced wolves in the West aren’t yet ready to emerge from Endangered Species Act protection. That decision denied states‚ requests to start conservative hunting seasons on wolves in Montana, Wyoming and Idaho.

I maintain that we are entering brand-new territory in terms of understanding wolf behavior. What we know about how wolves behave around people is based on centuries of interaction, but throughout that time, from central Europe to Quebec, wolves have been hunted, and have kept a fearful distance from humans. Will it take an attack here in America to remind wolf managers of that essential truth?

One of the fundamental lessons of wildlife management is that it ain’t always the critters that count. Human tolerance has always factored in how many and where wild animals roam.

I only hope that Westerners‚ intolerance of wolves is motivated only by our loss of elk, cattle and domestic pets. If a human whether a child, a retiree out for a walk or an armed hunter is attacked by a wild wolf, you can expect the simmering discontent over wolves to become a rolling boil.