Whitetails By The Weather

Twenty years of weather data on whitetails can help you forecast deer movement this season. 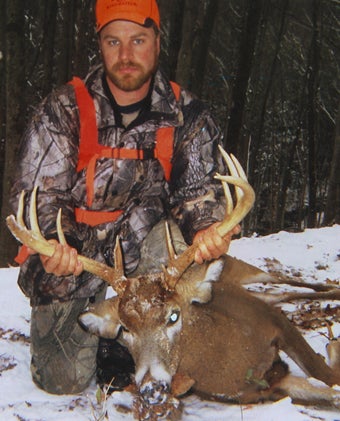 We all know that weather affects whitetail movement, but even experts occasionally disagree on exactly how. Lively debates can ensue from simple questions like: Which is more important, wind or temperature? Do deer move best on a rising or falling barometer? Do atmospheric conditions (rain, cloud cover, fog) really matter?

In 1979, the opportunity to get the answers to these questions arose when I acquired a 1,900-acre tract of whitetail range in the famed South Texas “Brush Country” along the Mexican border. From the first day of the first hunting season I kept records of every whitetail we saw in the field, along with notes on wind velocity, wind direction, barometric movement, air temperature and sky conditions. I also noted the moon phase, month, week, date and number of hunters in the field each half-day. As a result, the database now reflects 1,113 days hunted; these days generated 9,104 antlerless and 4,337 antlered deer sightings for a grand total of 13,441 deer seen. (All of these sightings occurred on the same piece of property during hunting season.)

This massive log of observations has permitted me to calculate the total number of deer on the property, the deer observed per hunter-day, bucks seen per hunter-day, the observed sex ratio and totals of the above information for any given month, week or day of the season. It should be emphasized that this ranch was not enclosed by game-proof fences. Also, all ratios are derived from observed data, which is not necessarily identical to reality. Since the property actually supported fewer than 200 adult deer, rather than the 640 counted annually, obviously multiple sightings occurred. Experience suggests that because bucks are more secretive, does are more subject to multiple sightings. But how much more? We could not be sure. Several standard census methods were used (including helicopter counts) but no consistent correlation with reported numbers was ever discovered. These population figures, then, are only trend data, valid as such as long as the data-collection techniques were consistent from year to year, which they were.

The correlations between number of deer sighted and weather parameters are very reliable. However, because certain weather-related effects on deer movement will vary between “my” deer and those in your hunting grounds, the data shouldn’t be taken unequivocally. One of the most obvious variables is temperature, which we will discuss shortly. Another is hunting pressure. We kept the hunting pressure on my land light by rotating stands, hunting only from stationary locations and never hunting over food plots. However, the hunting pressure where you hunt may be greater and that will certainly affect deer movement.

One pitfall that turned up during the analysis of this database was the interrelation of weather parameters. For example, winter weather fronts in our area come from the northwest. If you were to try to determine what wind direction whitetails prefer, you would find that a northwest wind is the optimum condition. It is, but further analysis of the data shows that deer actually don’t care about wind direction. What they do love is a moving barometer, and a moving barometer is usually accompanied by a northwest wind.

Temperature
“Too hot” is a relative phrase. My data show clearly that high temperature inhibits deer movement, while low temperature stimulates it. Of course, every hunter has known this since boyhood. However, the database showed that colder is not automatically better. Too hot is unfavorable, but so is too cold. Extreme cold spells (in South Texas, around 10 to 12 degrees Fahrenheit) make our whitetails lie down out of the wind and refuse to move at all until things warm up. I can detect no preference for any particular part of the temperature range between 20 and about 60 degrees (if all else-moon, wind, rut, pressure-is equal), but temperatures above 60 degrees, which are common during winter in these latitudes, clearly suppress deer movement.

This temperature scale will obviously change with latitude-a deer in northern Minnesota might consider winter readings in the 40s a heat wave. There will surely be some cutoff temperature above which daytime whitetail movement is curtailed. Depending on where you hunt, it may be 30, 40 or 50 degrees that becomes uncomfortably warm for the local deer, but the “colder the better” philosophy is no more applicable in your area than in mine.

Barometer
Of all the weather parameters, this is the one I pay the most attention to. It’s a complicated topic, but basically, my data tell me that whitetails prefer a moving barometer to a stationary one, a rising barometer (such as high pressure moving in after a storm) to a falling one and a steady high barometer to a steady low one. In my opinion barometric data is so important that I question the seriousness of any deer camp that doesn’t have a quality barometer prominently displayed.

The sensitivity of a whitetail’s built-in barometer is so precise that the careful observation of a deer herd’s behavior can easily foretell weather changes. A barometer gives hunters the ability to accurately predict the amount of deer movement that can be expected.

Atmospheric Conditions
When I say atmospheric conditions, I essentially mean precipitation or its absence, plus the amount and nature of cloud cover; specifically I mean rain, mist, fog, clear skies, cloudy skies and partly cloudy skies. Without access to the database, I’d have bet my favorite rifle that clear skies would produce more sightings than cloudy or partly cloudy skies…I sure would have missed that rifle. The grungier the sky, the better the deer like it, up to but not including heavy rain. They love a ground fog, and a light misty rain is among the most promising of situations. Of my more than 200 whitetail bucks, not one has fallen during a heavy rain, but the first few hours after the end of a prolonged rain represent the most favorable condition I know.

I’ve also taken many nice bucks in fog, mist and drizzle. The database tells the story: If temperatures are not unusually low, Texas whitetails pay little attention to misty, damp weather and, in fact, seem to feel most secure in it.

Wind Force
If wind direction matters only indirectly, wind velocity affects deer movement very directly. Whitetails on the Mexican border don’t like winds over 20 miles per hour, but deer on the Saskatchewan prairies seem to have a greater wind tolerance. Below 20 mph, however, my whitetails don’t favor the “less is better” theory; they move as freely in a 15 mph breeze as when it’s dead calm. But the nature of the wind is more important than the velocity. South Texas deer dislike gusty, direction-switching breezes; they dislike them even more than stronger but steadier ones.

Moon
The phase of the moon is not exactly “weather,” but the moon does affect whitetail behavior. It may be the light, or a gravitational effect, or maybe some mysterious something else; I offer no hypothesis, but my 20-year database clearly says that our chances of seeing a buck on a morning after a moon-dark night are fully five times better than after a bright night (assuming all else is equal). That figure represents bucks that moved of their own free will, not because they were jumped, driven or lured. Evidence in the database also suggests that buck sightings are likelier around noon (11 a.m. to 2 p.m.) on days following bright moonlit nights.

The database yields information as to which period of the open season produced the most buck sightings per man-day hunted. It is not surprising that the best period brackets the peak of the rut. Some conclusions drawn from my database are obvious, but many are surprising. For this reason I recommend starting a database of your own. Though I used a simple notebook, there are many good computer “hunting log books” available that will cross-reference input data for you automatically. Some of the good programs even combine this information with topographical maps or aerial photos. This way the answers to your questions about when deer move in your area won’t be based on superstition, old wives’ tales, myth, ESP or guesswork, but on your own observations and evidence.