Food Plots: A DIY Irrigation System by OutdoorLife I’ve never claimed to be the world’s greatest deer hunter. In fact,... 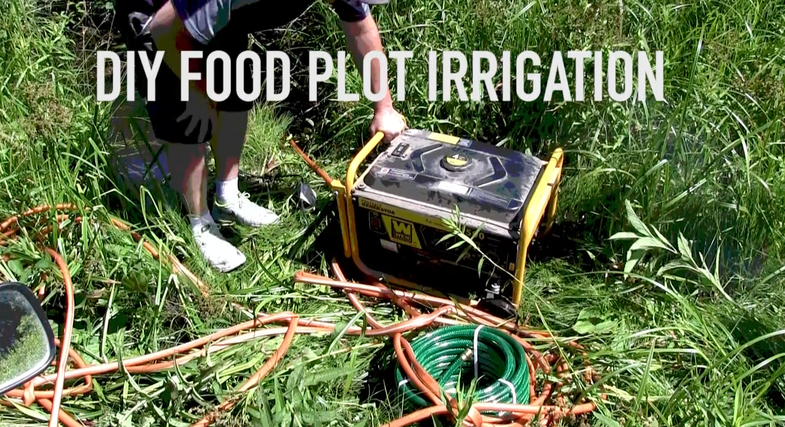 The author's attempt at a home-made irrigation system wasn't pretty, but it got the job done.. Tony Hansen
SHARE

I’ve never claimed to be the world’s greatest deer hunter. In fact, I think I’ve made it plenty clear that I have to work hard to find success – and that’s just the way I like it.

To me, there’s a lot to be said about a willingness to recognize your own limitations and then surpass them by utilizing other skills or attributes to compensate.

I’m not a meteorologist. I’m not a farmer.

I can’t make it rain and I’m quite certain there are things I could do better when it comes to growing food plots and enhancing habitat.

It’s been a dry summer thus far here in southern Michigan. I talked about that a bit in my previous entry and documented a bit about the corn and bean plot I planted earlier.

I also hinted at a possible irrigation solution. Here are the results – unspectacular as they might be.

My plan was pretty simple: To utilize an existing water source to provide irrigation to the food plot.

A couple of winters ago, a buddy used his backhoe to dig a test hole in an area that grew water-loving plants year-round. My suspicions were confirmed as soon as the hole started to take shape: There was a spring just below the surface.

The hole ended up being about six feet in depth and about four feet across. In less than 20 minutes, that hole was full of clear, cold water. It’s remained that way ever since, and even during these drought-like conditions, continues to overflow steadily.

Being a cheap but enterprising type of redneck, I gathered up some available equipment: A submersible pump, a generator and all the garden hose I could find.

I dropped a 5-gallon bucket into the hole with the pump inside (to keep any mud and dirt from clogging the pump), fired up the generator and started running hose.

Apparently, 400 feet is a bit too much for a ¼-horse pump to handle. I could get water to the plot but there simply wasn’t enough water pressure to run any type of sprinkling system.

So I cut the distance in half by using an old tank. I ran hoses to the tank and allowed it to fill. Then I repositioned the pump to transfer water from the tank, effectively cutting the distance the pump was located from the plot in half.

This worked better but still wasn’t quite enough pressure. So I simply laid the hose on the ground, disconnected the sprinkler and used a basic “flood” irrigation technique.

It wasn’t pretty. It wasn’t fancy. But the ground got wet and that was the overall goal.

The setup could have been greatly enhanced with a pump more suitable for the job. A trash pump would have been ideal and likely could have powered a couple of wide-reaching sprinklers. But I don’t own one and was working with what I had on hand.

I can’t do anything about the weather. I can’t force it to rain. But I can look at what resources I have available and see if there’s something I can do.

Next week, if no rain falls between now and then, I’ll do it all over again and this time I’ll add another section of hose and simply run direct from the water source. I’ll fill the generator with gas and let it run until it’s out of fuel, moving the hose around as need be to get the best coverage I can.
If you have an area on your property that stays wet most of the year, consider digging a test hole to see if you might be able to create your own water hole.

Mine is frequently visited by deer and other critters, making it a great stand location – that alone makes the project worth doing. But, in a pinch, it just might be able to serve as a source of water for irrigation to boot and save the food plots you’ve invested time and effort into.