Will Winter Wipe Out Your Deer Herd?

__Charlie_ Alsheimer_ A severe winter is one thing to Al Roker, it’s quite another to have a northern state’s deer... 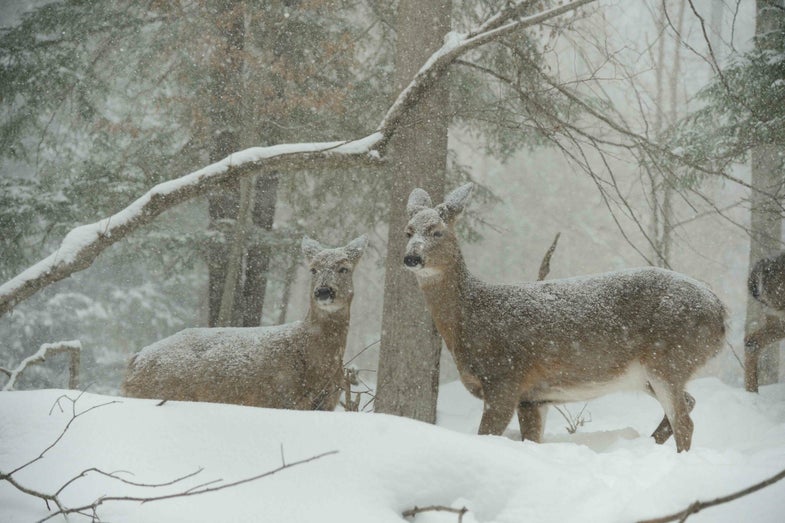 A severe winter is one thing to Al Roker, it’s quite another to have a northern state’s deer biologists tell you that the Winter Severity Index (WSI) in parts of the country is rapidly tipping toward the severe. Freezing temperatures and hazardous driving conditions are one thing. Constant waves of heavy snow and sub-zero cold mean that deer—and turkey—losses may be considerable. This is especially true in the Northeast. The snow machine began to crank up around Thanksgiving. After a month-long respite, winter conditions have been nothing short of brutal ever since.

“It was a wild weekend here,” outdoor photographer Charlie Alsheimer told us today. “Lots of snow on Saturday when I took these photos and a wind chill of -30 yesterday. Our wildlife populations are beginning to take a real hit here.”

And whitetails in Alsheimer’s hunting area of western New York State may not even be seeing the worst of it. The National Oceanic and Atomospheric Administration’s (NOAA) snow depth map for the Northeast is nothing short of remarkable. With another month of winter to go, snow depths are greater than 24 inches in much of New York, Massachusetts, Vermont, New Hampshire and Maine.

Snow depth and daily temperature is what biologists use to compute the Winter Severity Index (WSI). Basically, the WSI tracks snowfall and temperature from December 1 through April 30 and provides a way of assessing the winter’s impact on wildlife. Any day in which the temperature drops to zero or under is scored as a 1. Additionally, any day in which there is 18 inches of snow on the ground also gets scored as a 1. So, if 12 days in January had 18 inches of snow cover and temperatures on 6 of those days dropped to zero or below, the score for January would be 18. A seasonal score of 50 or under = mild winter, 51-80 moderate, 81-100 severe, and over 100 very severe. Severe and very severe winters generally mean reduced deer numbers due to winter kill. Over the past few winters both Wisconsin and Minnesota have experienced severe winters in the northern parts of their states resulting in declining deer harvests in recent years.

Deer watchers can keep track of winter severity by visiting www.weather.gov and computing the WSI for their area. It’s a bit too soon to reach any firm conclusions, but I computed the WSI for my property in New York and all I can say is I’m hoping for an early spring or at least a serious thaw. A property we manage in the Adirondacks has had knee-deep snow since before Christmas along with perhaps 20 or more days of below zero temps. Their WSI is already crowding 100. Chances are the winter of 2015 will fall into the very severe category. I’m not looking forward to walking the property once the snow melts down.

Remember, though, that the key to winter severity in terms of survivability of wildlife is duration. Deer can take almost anything for short periods of time. The past 30 to 45 days have been hell, but we haven’t reached the severe range on the WSI. If we have a normal spring with a mid- to late-March break, our deer have a shot. The key month for most northern deer is generally March.