This Side Up: What’s the Best Way to Hang a Deer?

There are pros and cons to hanging a deer by its head and its hind legs, but one of them is better than the other 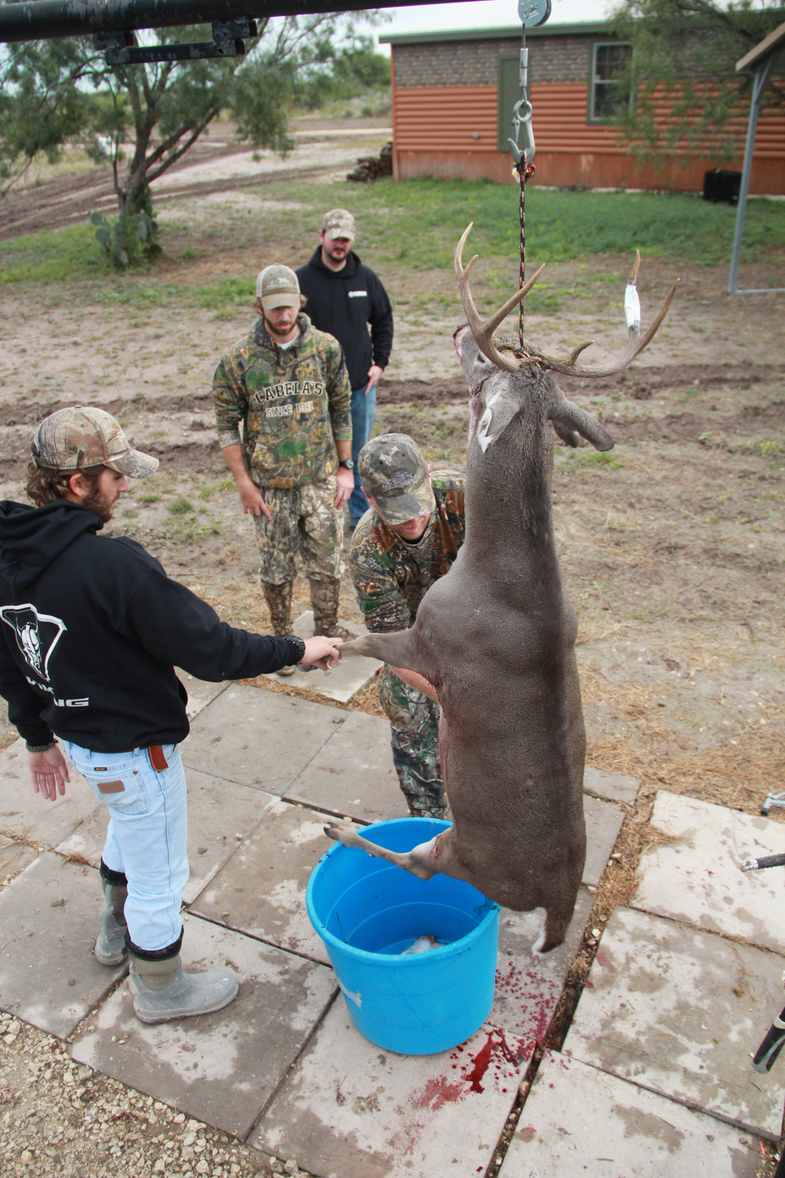 There’s more than one way to skin a cat, but what about a deer? A small minority of deer hunters get all their skinning and butchering work done at ground level, but the rest of us usually opt for a solid meat pole where we can hang our deer, tell lies, and sip a beverage while meat is made. But before the venison flag is raised, first you need to decide how to hang the deer. Is it better to hang the deer with its head up or hindquarters up?

Is It a Regional Thing?

Speaking of directions, the cultural compass might have some influence on how folks hang their deer. As a native Minnesotan, I still vividly remember my first deer hunt that took place outside of the Midwest. It was in Oklahoma at a special place called Croton Creek Ranch. Aside from killing my first buck with a bow (and losing its hindquarters to coyotes during the middle of the afternoon), the memories that stick with me most from that hunt are the recovery and butchering of my buck.

Strangely, we didn’t field-dress my buck in the field—we did everything back at the barn. It’s called “field-dressing” for a reason, right? The second oddity, to me, was that we hung him by his antlers instead of his hind legs. I was grinding my teeth, as we were going against the grain of everything I’d been taught about handling a dead deer. I’d always field-dressed my deer where it expired, immediately after the kill. Also, I was taught that it’s literally ass backwards to hang a deer by its head. As we stood in the Oklahoma barn, I felt like I didn’t know up from down. Why couldn’t these crazy people just do it the “right” way to save me from a manic meat-processing breakdown?

Since then, I’ve seen those same processing techniques practiced during my hunting travels in other parts of the country—and they make a lot of sense.

The Benefits of Hanging Your Deer Heads-Up

1. The innards will fall out much easier, and they won’t get caught in the chest cavity

This is assuming you wait to field-dress the deer until you’re back at camp. Why would you do that? When you open the body cavity of a deer in the field, you’re exposing it to all sorts of nasty dirt and bacteria. Unless you have a long drag ahead of you, where the removal of the gut weight will save you from a broken back, it’s probably best to tough it out and wait to open up the deer until you’re in a clean, controlled environment. Of course, if you’re dealing with warm temps (above 40 or 50 degrees) and it will be awhile before you can get your deer unzipped and on ice, then field-dressing at the kill site is probably your best bet so the meat cooling process can commence faster.

Rinsing and draining the blood, guts, and other undesirables from a deer before butchering is more effective with its butt to the ground. Again, the chest cavity acts as a reservoir if you hang the deer in reverse.

3. Easier to quarter and de-bone

Out West—where it’s common to pack out meat great distances—some hunters argue it’s easier to butcher a deer if it’s hung by its head. I suppose this has some logic, considering you can remove all four quarters and work on de-boning without the deer falling to the ground. But oftentimes this open-country process is forced to the ground, because hanging trees aren’t always an option.

If you kill a buck, there’s a good chance you’ll want to do something with his antlers to preserve the memory of your hunt. By hanging a buck by his rack, you won’t risk scraping the precious bone on the ground, breaking tines, rubbing the cape, or letting farmyard edogs do damage. Make sure the hanging rope is secured to the base of his rack, where it’s strongest. Never hang the buck by his neck if you plan to keep the cape in primo condition for a shoulder mount.

Hanging a Deer by Its Hind Legs

Like many of you, I was taught to hang a deer by its hind legs. And, like many of you, despite all the excellent reasons to hang a deer with its eyes to the sky, I continue to do it the way I’ve always done it. Why? Mainly for the same reason we wear a lucky cap, hunt the same stand on opening day, or tell the same old jokes in camp—tradition. Truth is, both ways of hanging a deer will end with delicious venison in the freezer if you treat it right.

It’s easy to argue that the heads-up approach wins the deer-hanging debate, but what do you think is the best way to hang a deer? Share your thoughts by commenting below.