Aside from hunting popular ag fields in the first days and weeks of deer season, scrape lines can offer some... 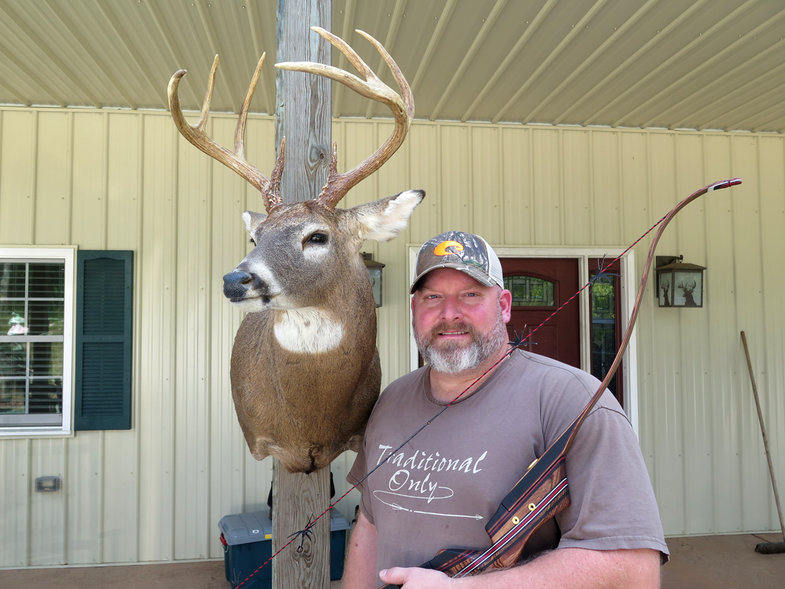 Aside from hunting popular ag fields in the first days and weeks of deer season, scrape lines can offer some of the most-consistent mature-buck opportunities of the entire fall. Of course, “can” is the operative word here, because recognizing consistent scrape-hunting success can be a rather involved, detail-oriented affair. Get a bit lazy or go about things a little too haphazardly, and you’ll simply educate your herd to the fact that its being hunted. But play by the rules, and you might be tagged out before Halloween.

All bowhunters seem to have an opinion on how to hunt these oblong bare patches of forest dirt, scraped clean by sharp hooves, but Kentucky’s Harry Pozniak is a little more invested in the process than most. Pozniak, 42, has operated River Valley Farms since 2007, and enjoys putting his bowhunting clients onto big scrape-running bucks, with help from an extensive collection of game cameras and intimate knowledge of his western Kentucky hunting lands.

“We go from hunting early season acorns to trying to isolate where big bucks hang out, which can be a lot of boots-on-the-ground scouting,” Pozniak says. “I’m trying to locate individual big buck core areas. The luxury I have is that I’ve had my hunting properties for six, seven, eight years, and the hotspots are consistent. The same ridges will have rub lines and scrape lines every year.

“The rubs will show up first, but by Halloween weekend the bucks will really start laying down the scrapes—and I like to concentrate on hunting those scrapes,” Pozniak explained. “I get in the woods a week or so before Halloween and hang cameras on those scrapes. If I find 30 different scrapes I’ll hang 30 different cameras. My personal strategy is, I’ll hang a camera, get that buck’s picture, and then get the camera out of there. One pic is all I need to know that big buck is comfortable there and will be back.”

Pozniak is quick to point out that not just any scrape is worthy of some game camera recon.

“The scrapes I will target, those are all about location,” he advises. “Scrapes along field edges and on ridge tops I consider more secondary scrapes; my favorite scrape to find is very close to a buck’s bedroom, in the thickest stuff possible. I consider these the primary scrapes. The closer to the bedroom the more he’s going to frequent that scrape during the day, as opposed to those on the field edges or ridge tops.

“I know those scrapes near the bedroom, that buck is going to visit three to six times during the day. He’ll be checking those regularly because he might only have to travel 50 yards to do it. And you’ll often have multiple bucks visiting the same scrapes.

Why the ‘Hang and Hunt’ Works Best

“Because we’re so close to his bedroom I won’t go in there and set a treestand,” Pozniak says. “For this type of hunt we’ll use climbers. It’s all about the element of surprise, and when we go in we’re going in to kill him that same day. We seem to have a lot of really good straight trees that makes this possible—we’ve got a lot of oaks, maples, hickory trees—but primarily a lot of oaks.

“When we’re hunting this way we’re not cutting shooting lanes so it’s just a matter of setting up where you think you can get the shot—typically it will be 15 to 20 yards from the scrape. For stands I like to use Summits—I like their Goliaths and Vipers.

“At what time of day will we go? It can depend on what my cameras are showing, but a lot of times we’ll go in at 10 or 11 a.m. and sit all day. That’s a pattern we’ll use from the week leading up to Halloween, and for the next two weeks, until you start seeing lots of bucks chasing, which is when the scrapes tend to go cold.”

“Going in at 10 or 11 a.m., I think that helps,” Pozniak offered. “At that time of year there’s typically a lot of deer movement at dawn, so if you go in during late morning chances are your target buck is bedded down. I can’t tell you how many clients have told me they’ve never hunted midday, and it shocks them at how much movement they see. After hunting with me, many will go home and hunt midday back home.

What About Scents and Calls?

“We’ll usually do a [scent] dragline in to the setup from a few hundred yards out,” Pozniak says. “That way if a target buck cuts your tracks it might follow you in. That actually happens quite a bit. And then we’ll hang the scent drag at eye level above the scrape.

“And now, calls become big again—but you can also blow your target buck out of there by over-vocalizing,” Pozniak warns. “So I always advise starting with soft calls. At that time of year you’ve got to pay attention and take what the woods give you; while on stand you might hear bucks battling, or some grunting. If you do, get in the game with them and mimic those sounds. And some days, it’s better to sit and do nothing.

“I find that a lot of my clients have never rattled, they’ve never blown a grunt, and are skeptical about calling in general. In reality you can work a deer like a turkey or an elk—but you’ve got to feel that out. It has to be the right day, the right conditions. You as a hunter have to feel that out.

“As far as scents go, my recommendation is to get something local to your area—a brand that’s not commercially sold in box stores. You can get online and check out some options; I just feel like with the commercial stuff, the deer might have gotten used to those smells. I like throwing something different at them; it seems to make them more curious.

“If there are no suitable trees we also like ground blinds for scrape hunting,” Pozniak said. “I like to set them about 25 to 30 yards from the scrape, and I don’t brush them in because we’re just using it that day. But we’ll usually use a decoy or two 20 to 25 yards from the blind. We’ll face the decoys in the direction deer should be coming—and typically an incoming buck will see those and pay no attention to the blind. If I had to pick a favorite decoy it would be a buck, and typically, I’ll make it a half-rack by using only one antler.”

Pozniak is quick to point out that one reason his specialized techniques work is lack of hunting pressure. Pozniak takes only about 35 clients (16 bowhunters and 16 rifle hunters, and a few muzzleloaders) yearly on his leased parcels, which total about 4,000 acres. Spread out over several months, that’s truly minimal pressure.

“I don’t have any ‘hard and fast’ rules regarding decoy placement, but they should not surprise your target buck,” Pozniak advised. “Generally if you’re hunting tight cover, you want the blind between the cover and the decoy. And you also want to keep the decoy away from the scrape, so if the buck wants to come in and work the scrape, he can. We use a decoy simply to take the attention off the blind, and it’s something I find kind of fun.”

To experience an exciting scrape hunt with Harry Pozniak contact River Valley Farms in Cadiz, KY, at (270) 206-1145 or www.rivervalleyfarmsky.com.