As a youngster, it rolled off my tongue as easily as: “George W. Perry…Montgomery Lake, Alabama…June 1932…22 pounds, 4 ounces…Creek... 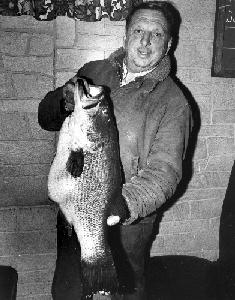 As a youngster, it rolled off my tongue as easily as: “George W. Perry…Montgomery Lake, Alabama…June 1932…22 pounds, 4 ounces…Creek Chub Wigglefish.

Because I spent my summers fishing bass ponds in Western Massachusetts, I just knew that someday I would be the guy to stomp on the Bolonis record (pictured left). Bound and determined, I fished every day and most nights attempting to hunt down that state record fish. Somewhere along the line, life short-circuited my quest and it wasn’t until recently that I came to the realization that the Bolonis bass may not simply be another great fish, but rather one of the most noteworthy fish records on the books — anywhere!

Back in June, the internet sizzled with talk about a giant largemouth taken by retired Army Sargeant Bryan Tuliano (pictured above). The fish, caught on a surface bait on Massachusetts’ Lake Wampanoag in Gardner, registered 14.2 pounds on a handheld Berkley digital scale. Although he attempted to get the brute officially weighed, Tuliano knew that his chances were slim because it was a Sunday. So he released the fish back into Wampanoag where it presumably swims today.

Which all brings us back to 1975 and Walter Bolonis.

“In Massachusetts, the largemouth bass record is the one to beat,” says state fisheries biologist Richard Hartley. “That angler (Mr. Bolonis) on his deathbed swore where he caught it. It is a coveted record in Massachusetts.”

Why? First consider that the fish was caught through the ice during a time when largemouths weigh decidedly less than when they are ripe with eggs during the spawn.

Finally, consider the state record bass marks. In 49 states in which largemouths exist, the Bolonis fish surpasses record weights in 35 of them. The 14 others? All are south of the Carolinas.

Remarkable? Heck yes? An unbeatable record? I’m not sure. Thanks to Bryan Tuliano, the next state record largemouth bass swims in the waters of Lake Wampanoag.