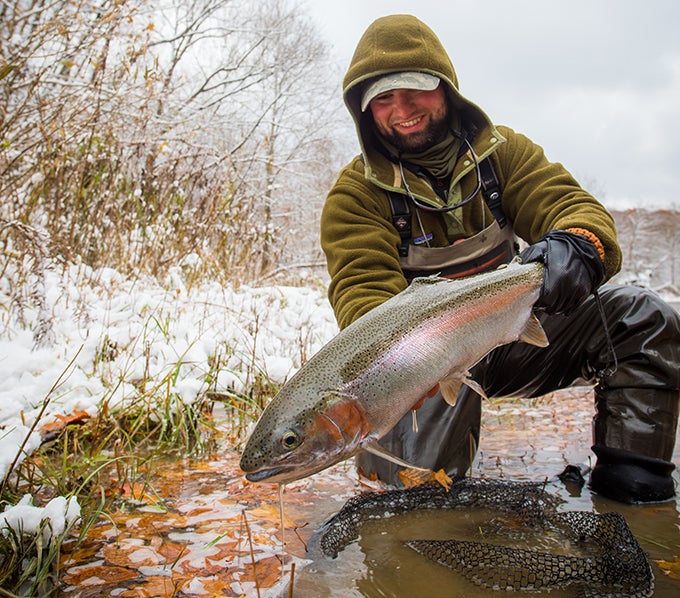 Necessity’s being the mother of invention has led to many advances for steelheaders. Whether you go steelhead fishing along the West Coast runs or the Great Lakes tributaries, here are four tricks and tools breaking on the steelhead fishing scene that solve common dilemmas.

1. A Better Planer Plan
When your favorite steelhead river is running low, it can be difficult to get your plugs far enough behind the boat to prevent snags or grinding the bottom. The solution is to deploy a Church Stern Planer, which is basically a cone of hollow plastic designed to clip to your fishing line ahead of the plug and then take that lure well behind your boat.

Captain Bob Lausman of Sawyer, Michigan, almost always has two of them deployed behind his Carolina Skiff when forward-trolling the heavily stocked St. Joseph River, where fish often hold in water 6 feet or less in depth.

“You set them to where the boat doesn’t spook the fish,” says Lausman. “Our fish like high-action lures, such as Hot-N-Tots and Worden’s 3½-inch Mag Lip. With the Stern Planer, you just let out 20 to 30 feet of line, clip the thing on, and drop it 150 or 200 feet behind the boat. This keeps the deep-diving plugs in what I call the ‘steelhead eye zone’ above the fish.”

Because the Church Planer is positioned relatively close to lures (unlike side planers), wobbling action and fish strikes are better transmitted directly to the rod tip, particularly when you’re using no-stretch braided line. Likewise, debris picked up while trolling, which can kill a lure’s realism, is likewise easier to detect.

2. Swapping Out Spawn
Spawn skeins and cured eggs tied into bags are proven fish-getters throughout the steelhead landscape. But when salmon or other steelhead aren’t actively spawning and providing fresh natural eggs, steelhead often spurn these baits.

On the Pacific Coast, anglers switch to baits that steelhead find naturally in the ocean, such as coon shrimp and prawns. In the Great Lakes, anglers Andy Peterson and his father, Steve, who charter and run Starboard Choice Marine in Mishawaka, Indiana, often bait up with alewife fillets. They hook chunks of fillets brined in salt or tie the meat into spawn bags. 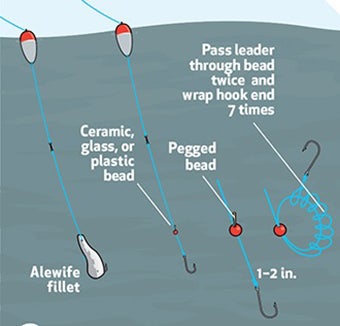 What if steelies are on spawn but you’ve run out of eggs?

“Steelhead actively feeding on spawn will suck in a glass bead under a float drifting with the current so readily that they often get hooked deep in their throat,” says Eng. “You have to put the hook an inch or two below the bead, which you can peg with a toothpick. When you set the hook, the bead slips out of the fish’s mouth, where it’s easily removed for release.”

3. Go for the Goby
What if steelies are eating sculpin and you’re tired of spending 30 minutes tying a complicated imitator that might get snagged and broken off within five minutes?

That’s exactly the situation that led Craig Lewis to try a lure far more common for bass than steelhead. Proprietor of Erie Outfitters and steelhead guide on the Lake Erie tributaries known as “Steelhead Alley” near his base in Sheffield Lake, Ohio, Lewis employs soft-plastic goby imitators, notably the 4-inch Goby and 3 ½-inch Goby Jr. from Poor Boys Baits. 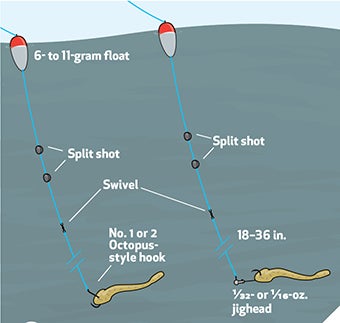 “I just nose-hook one on a No. 2 or No. 1 Gamakatsu Octopus-style hook or a 1/32- or 1/16-ounce jighead, like I’d hook a live minnow. The lure goes through the water belly-down that way, looking natural,” says Lewis. “I add some split shot and fish this with a center-pin rod below a 6- to 11-gram float, just letting the environment add some action.”

Lewis says plastic gobies have proven effective beyond his local streams, producing in the Niagara River as well
as in Michigan flowages.

“Guys who have tried it really believe in it. It seems like that’s just a few steelheaders around the country, but it’s catching on,” Lewis says.

“You can fish for steelhead—and do pretty well a lot of the time—just chucking and winding as you would for bass,” says David Rose, who runs Wild Fishing Guide Service in Grawn, Michigan. When the time comes to fish for steelies, Rose takes the same 18-foot aluminum boat he uses for a wide variety of inland and Great Lakes species to Northern Michigan rivers such as the Betsie and the Big Manistee, drops his bow-mount trolling motor, and casts.

“A lot of steelhead guys get in a mindset that the only ways to catch them are traditional drop-back methods through deep holes,” Rose says. “But casting allows you to probe shoreline blowdowns and other cover where steelhead almost never see any kind of bait or lure. It also lets you present lures to fish holding in more traditional spots in ways they don’t usually see.” 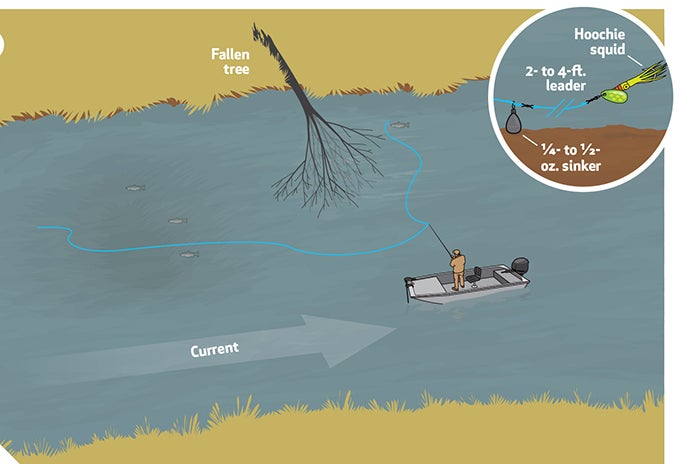 He explains that the drop-back methods of plug fishing move hardbodies or bait slowly downstream into the face of steelies. By quartering casts upstream and reeling fast enough to make crankbaits wobble, the angler brings lures into the fish’s face fast, provoking reaction strikes.

“The downstream sections where holes tail out are great steelhead holding places,” Rose says, “especially if salmon are spawning at the upper end of the hole. Steelhead lie at the other end and eat salmon eggs. A fast-moving plug or a 5-inch plastic grub on a jighead coming fast downstream sort of shocks them into striking.”

Favorite crankbaits for this technique include deep-diving versions of Rapala Husky Jerks and Smithwick Rogues. A 5-inch K-Grub from Custom Jigs ’n‘ Spins in the orange-tailed Firetiger pattern is another go-to bait Rose uses when he hopes to get reaction strikes from steelhead.

Wicked Lures —which were developed on the West Coast and are gaining fans wherever steelhead run—are particularly suitable for casting in rivers. A combination spinner blade and “hoochie” squid ahead of a single hook, the lures are designed to be fished on a leader 2 to 4 feet behind the weight—sort of like a Carolina rig that isn’t dragged on the bottom.

“Just use a bass casting sinker, usually from ¼ to ½ ounce ahead of a barrel swivel,” says inventor James Beasley of Port Angeles, Washington. “The weight placement lets you find the bottom and feel other structure like logs before you hit it with the spinner itself and get snagged. You’re in the strike zone longer and can cover way more water.”