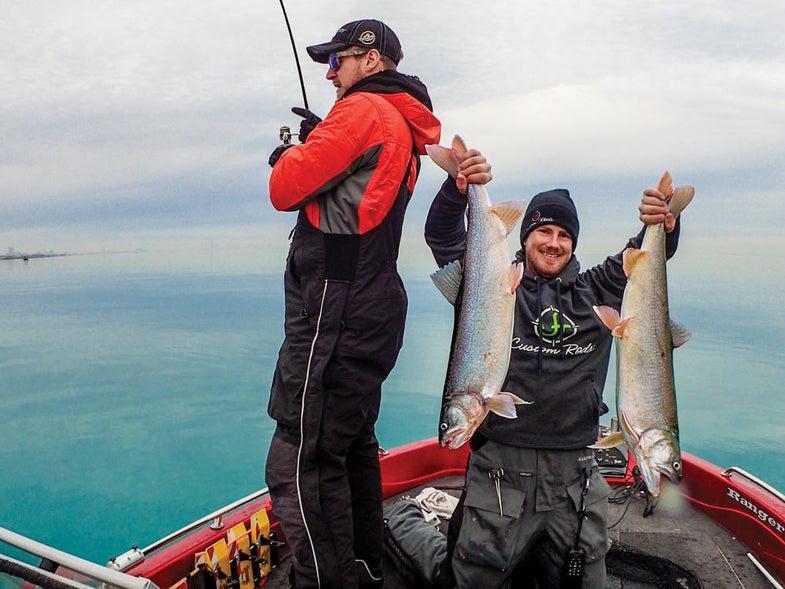 Our boat steers a course parallel to a break wall along Lake Michigan’s western shoreline. Early April water temperatures register in the mid 40s and air temperatures hover near freezing. The fish finder reads 28 feet deep. Where rock turns to sand, a steady procession of long, inverted V-shaped marks reveals the presence of giant lake trout. They resemble mini submarines stealthily positioned within a few feet of the bottom. Lake trout can be temperamental feeders, but not on this day. I work a gold-colored blade bait on 20-pound-test braided line and medium spinning gear, and give the rod a flick after the lure hits the bottom. Through the rod tip, I can feel the lure jump off the sandy bottom and careen into an adjacent boulder. It flutters and flashes on the fall. The line goes slack as the lure settles back down. With the next snap of the rod, the lure rises just inches and is instantly swallowed up by one of the “mini submarines.”

Lighter Side of Lakers

On walleye-size spinning gear, the lake trout might as well be a nuclear submarine. There is no budging the fish. It motors off as though oblivious to the new gold piercing in its mouth. The fish puts an uncomfortable bend in the rod and unrelentingly strips line from the reel. After several minutes of losing line, putting greater pressure on the fish and trying to move it off the bottom seem like a good strategy.

This merely agitates the fish. I lose more line. The trout violently tosses its head in an attempt to dislodge the lure—the thin braided line perfectly telegraphing it all. As the battle wears on, the length of the fish’s runs become shorter but remain powerful. He’s finally netted and then quickly released after a few photos.

This scene can be played out across all the Great Lakes (absent the relatively shallow waters of Lake Erie) and on many inland lakes across the United States each spring. Lake trout are the longest lived and largest of all the trout species in North America. These leviathans of the deep can live 70 years and have been caught weighing up to 100 pounds in the immense waters of Saskatchewan’s Lake Athabasca. In the United States, some of the more consistent lake trout fishing takes place in the Great Lakes. Record fish surpassing 60 pounds have been caught from Lake Superior, as well as fish topping 40 pounds from Lakes Michigan, Huron, and Ontario.

Many anglers associate Great Lakes trout fishing with heavy conventional trolling gear and downriggers to get baits down 100 to 200 feet, where lake trout reside during the warm summer months. This technique results in a much-diminished fight and a less-enjoyable experience for anglers. Flip the script, and target these same tenacious fighters with equipment on par with walleye or bass gear, in water less than 40 feet deep, and you have the recipe for some of the most exciting early-season fishing to be had anywhere.

Lake trout are first drawn to these areas during late fall in anticipation of the spawn. Large pods of mature fish concentrate in these areas in November. Here, they reside for as long as nearshore water temperatures remain within their preferred comfort range of 40 to 52 degrees and prey continues to be ample.

To locate pods of lakers along miles of relatively featureless shoreline structure, down-scan and side-scan sonar are invaluable. Pods of fish might contain as few as a couple of trout or as many as several dozen fish. Look specifically for rubble piles along break walls and transition areas between hard and soft bottom to attract the greatest aggregations of fish.

Since lake trout spend much of their time near the bottom, lure presentations should be precise and focused within the bottom 2 to 5 feet of the water column. On the waters of Lake Michigan, lake trout routinely target gobies that scurry along the bottom and take shelter among rocks and mussel colonies. In these settings, small blade baits like the B Fish N B3, Wolf’s Big Dude Blade, or Sebile Vibrato, as well as soft-plastics such as a 4-inch Kalin Lunker Grub or a Live Target Goby Paddle Tail can be convincingly hopped across the bottom to mimic gobies and draw a reaction from hungry trout. When it’s reacting to small baits, a lake trout can have a rather subtle bite—almost as though it knows how much energy is needed to capture and kill small prey. For this reason, a sensitive rod and low-stretch braided line with a fluorocarbon leader will help detect light bites and instantly drive home the hook in anywhere from 15 to 40 feet of water. The lack of elasticity in braided line also lets you feel the fight of the fish better, which is a plus when it comes to lakers.

In settings where lakers are focused on larger prey, such as whitefish, ciscoes, or other trout, a bigger presentation—such as 7-inch Water Wolf Lures Gator Tubes or Bondy Bait Mini Wobblers worked vertically on heavy bass-style gear—will serve as a better triggering bait. Work these baits with a lift-shake-and-hold presentation. After holding the bait stationary for several seconds, repeat the process. The pause part of the technique is critical.

If lakers fail to react to this subtle presentation, work the bait wildly for several seconds with big sweeping jigging motions, and then quickly reel the lure halfway up the water column. Stop the bait. Hold it motionless for a second, and then let it fall back to the bottom. Repeat the process several times. At times, lakers can be forced into a competitive chase-and-catch mode. Strikes from chasing fish can be savage. These cold-water fish are eager to attack baits both big and small. And once they’re hooked from a stationary boat, their pulling power and stamina is on full display.