A Michigan man made an unexpected catch on Sunday when he landed a record-breaking flathead catfish near Niles, Mich. The... 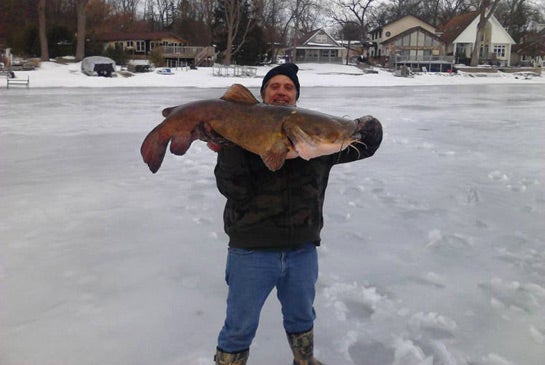 A Michigan man made an unexpected catch on Sunday when he landed a record-breaking flathead catfish near Niles, Mich. The catfish measured 46.2 inches long and weighed 52 pounds, surpassing the existing state record by about two pounds.

Dale Blakley, 45, and three buddies planned to go ice fishing for bluegills on Barren Lake in southwest Michigan. Blakley rigged a small glow-in-the-dark jig with a wax worm and dropped it through the hole in the ice. Less than 60 seconds after lowering the bait 20 feet to the bottom, he felt a bite.

“I noticed the spring bobber was wiggling a little and I knew that little wax worm wasn’t causing that,” Blakley told the Tribune. “I picked up the rod, and man, he took off. I knew that was no bluegill.”

The catfish fought for 75 minutes. When it finally rose through the water and the fishing party saw what was at the end of Blakley’s line, they realized they had a problem. The hole they’d cut through the ice spanned just six inches; The catfish’s head measured at least three times that size.

“My buddy grabbed the auger and drilled a hole next to my hole and then ran home for a hatchet to chop the ice between the two holes so we could get it out,” Blakley told the newspaper. “They were chopping and cutting while I had a tug-of-war with this giant fish. I was lucky we didn’t cut or break the line.”

By the time Blakley landed the fish with his 2-foot Frabill rod, his line was a tangled mess and the outfit was busted. Although he had hoped to release the catfish, Blakley was unable to find someone to weigh his catch on a Sunday. He stocked the catfish in his bathtub with ice and water overnight, then drove to DNR headquarters the following morning. Officials weighed and documented the catfish, then informed Blakley he must keep the fish for an additional two weeks in case of discrepancies. So instead of releasing it, Blakley is now looking to mount the monster catfish.

Blakley also plans to memorialize the record-breaking fish in a less conventional way: With a catfish tattoo on his arm that reads “52 pounds…state record.” Someone might want to remind him how frequent the turnover can be for fishing records. The record Blakley himself broke was held by a 49-pound 13-ounce catfish taken less than two years ago in 2012.