Photo by Dave Porter / Alamy Montana is loaded to the gills with passionate fishermen, and more arrive by the... 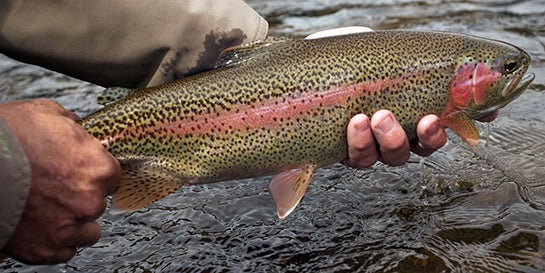 Montana is loaded to the gills with passionate fishermen, and more arrive by the planeload each year. But probably only a handful appreciate the complexity of the fishery they enjoy. And fewer still know to credit retired biologist Dick Vincent for the remarkable resource.

Vincent, now 73, was born in Montana, where he fished passionately while earning both his B.S. and M.S. in biology at Montana State University.

If there was a problem with Montana trout–and there was in the late 1960s–Vincent’s love and understanding of the water and the fish made him the right person to fix it.

“The enthusiasm he had up until his last day [of working] was incomparable,” says Travis Horton, a protege of Vincent’s, and regional fisheries manager for some of Montana’s most famous rivers for 13 years.

A Look Back
To understand the significance of Vincent’s contribution, we need to travel back in time.

It’s the late 1960s, and the rumors and whispers and grunts about the trout in Montana becoming smaller were escalating to a roar. Fishermen are inherently nostalgic pessimists. Whether it’s yesterday, last week, or 10 years ago, the fishing is never as good as it was then.

You can argue with memory, but not with science. After graduating from MSU, Vincent worked with Montana Fish, Wildlife & Parks to get a handle on the density and size of the trout populations in various rivers, including the Madison. The numbers and average sizes of the river’s trout declined year after year, and Vincent was convinced that increased flows from dams would lead to a larger and healthier trout population. The flows increased; the fish numbers didn’t.”

Vincent then turned to the practice of stocking hatchery-raised trout, which had been customary for decades. He proposed a test: He wanted to take a stream that had healthy wild trout populations and start stocking it while ceasing to stock stretches that were suffering.

This did not go over well. Fishing may be a recreational activity in many places, but in Montana it’s a way of life, and fiddling with any aspect of it can ruffle feathers. Consider that nonresident visitors to Montana contribute more than $2.75 billion to the state’s economy every year.

“Some of the hatchery folks wouldn’t talk to him,” Horton says of Vincent when he proposed the trial. “The public was calling for his job if the experiment went awry.”

But Vincent–who was then the Madison River biologist, a job Horton now holds–didn’t budge.

Turns out Vincent wasn’t crazy, and and after three years of testing different stretches of the Madison, he had the numbers to prove it. The very tributary where the state had started stocking rainbows in 1969 showed a dramatic decrease in the size of the overall trout population three years later. On the stretch where they ceased stocking, wild trout thrived. Two years after the study began, wild trout numbers there had surged 153 percent. Anglers had a hard time writing letters of complaint with both hands fixed to a doubled-over five-weight.

The state had been creating the problem all along. Stocking hatchery-raised trout in rivers and streams with healthy wild populations didn’t work.

“It was a combination of a few factors,” says Horton. “Primarily, hatchery fish are more aggressive than the same-age wild fish. They will force wild fish into less favorable habitat.”

History Is Made
Since 1974, everything has changed. Wild trout populations in the state have surged. Take one of Montana’s most popular rivers, the Missouri. This spring, biologists reported an average of 5,194 rainbow trout larger than 10 inches long per mile–up from the long-term average of 3,174.

And the non-stocking movement has not stopped with trout. Montana is looking at other species that can be kept wild as well. Reduced stocking of species such as channel catfish, for example, has shown similarly positive results.

So if it’s working in Montana, why not try it elsewhere? Horton isn’t sure if other states, such as Idaho, would ever follow suit.

“They will run into the same political issues Dick [Vincent] did, and that has a lot to do with it,” he says. “I don’t know if anyone will reach the level where we’re at.”