How to Catch Stocked Trout After the Rush of Opening Day

Once acclimated, stocked trout are no pushovers 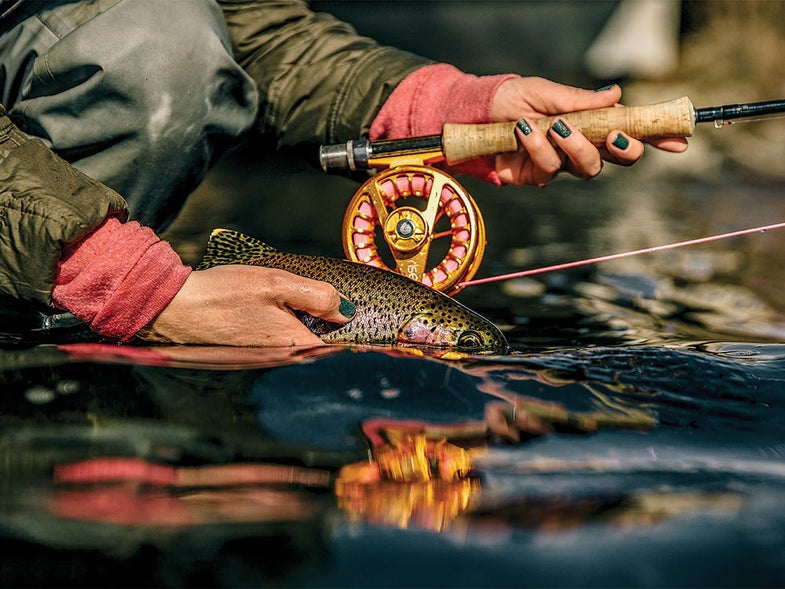 If other anglers are slinging lures, nymphs turn trout on. Andrew Miller
SHARE

Some states have a tradition that dates back generations: Watch the trout-stocking schedule, hustle to the stream, and stand side by side with dozens of your fellow anglers. If it goes well, you might bring home a limit.

Trout fishing in many parts of the United States is all about freshly stocked, hatchery-raised, pellet-fed fish and streams as crowded as a mall on Black Friday. Dozens of states have popular trout-stocking programs, even places that don’t support wild trout. In most cases, those fish are put in a stream or lake so anglers can catch them and take them home.

“We hear that all the time,” says Virginia Department of Game and Inland Fisheries district fisheries biologist Steve Reeser. “It’s true that a lot of stocked trout do get caught the first couple of days, but based on creel surveys and some electro-fishing work we’ve done, we know there are plenty of fish still there for the taking. You can catch trout long after they were stocked.”

After the Crowd Goes Home

Plenty of hatchery-raised trout are suckers for a gob of yellow dough their first day in new water, but it doesn’t take long for the survivors to adopt at least some characteristics of wild trout. Most notably, they learn where to hide.

“We find them in the same places we expect to see wild trout, like under root wads, undercut banks, and boulders,” says Reeser, who has used electro-fishing gear to find trout after they were stocked. “They like overhead cover. They don’t lie out in the open, which is why you don’t see them.”

They often don’t stay in the spot they were stocked, either. Depending on the size of the stream, they relocate anywhere from a few yards to a few miles away, often within a day or two of stocking.

“They will move up or down. There doesn’t seem to be much science to where they go, other than they seek out the best habitat they can find,” adds Reeser. “They are probably more likely to move downstream after a rain event, but that depends on flow, habitat, and stream size.”

Don’t assume you need to hike for miles to find those remaining trout. But Mark Swann, an environmental technician from Black Mountain, North Carolina, agrees it is important to find new water. He often waits for the crowds to clear out before targeting hatchery trout. His first bit of advice? Avoid areas with easy access and heavy fishing pressure. Swann also seeks out places most anglers overlook. Small, unassuming pockets within a long and fast run, narrow seams along the bank, and dark areas under overhanging limbs all demand a few casts.

“I work it all,” Swann says. “I don’t just go from pool to pool. I’m fishing every spot that might hold a trout, and I keep moving. I take chances. I put my lure in places other anglers won’t.”

Equally important? Stop treating these fish like they were stocked two hours ago. What was a sure bet yesterday is now one of the most difficult fish you’ll ever try to catch.

“They wise up pretty quickly. You have to approach them like you were fishing for wild trout,” says Swann.

Plod up to the stream bank and start fishing? That won’t work. Cast a shadow over the water? Any trout within sight will dart under a boulder or race downstream, never to be seen again. Plop a lure on their head? Not a chance. One wrong move and you can forget a dinner date with any trout in the area.

Swann works his way upstream, keeping a low profile as he makes long casts with a variety of lures tied to 4-pound monofilament. “That’s the main thing for me,” he says. “I always try to be stealthy.”

What to Use, When to Use It

For working hatchery holdovers, Mark Swann favors small in-line spinners like Joe’s Flies and Panther Martins, Swedish Pimples, and small floating Rapalas. Swann will also use a Woolly Bugger or some other attractor fly under a split shot just heavy enough to get it down to the fish.

“I’ll even use a couple of red or chartreuse plastic beads on a hook with enough weight to get it down deep. You need to get it in front of their face,” he says. “Keep trying different things until you figure out what works.”