I just got this scope in from Weaver the other day. It is part of our grand prize giveaway for... 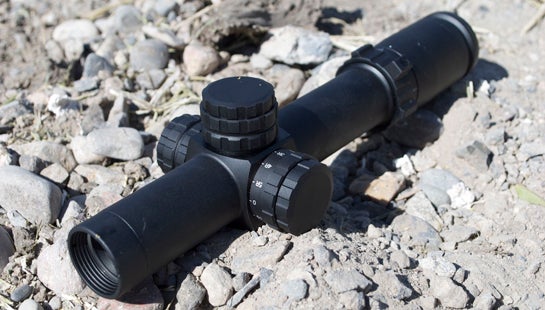 I just got this scope in from Weaver the other day. It is part of our grand prize giveaway for the Outdoor Life Shooting Slam, where one lucky reader will walk away with four guns, a pile of optics, ammo, accessories and a week of custom training with all these goodies at Gunsite Academy in December.

If you haven’t thrown your hat into the ring yet, you can sign up here.

I’m looking forward to putting this scope through the ringer. It is a first-focal plane 1-5×24 built on a burly 30mm tube. It’s an ideal optic for an AR carbine. Set at 1-power it allows for quick target acquisition at close range and fast two-eyes-open shooting.

For longer shots, 5X is more than enough magnification.

The reticle in this scope is Weaver’s own design called CIRT for close-intermediate range tactical.

The horizontal crosshair in the optic allows for more traditional milling, though with only 5X of magnification, precision ranging would be difficult.

But for holding off for wind or leads on moving targets it should work just fine.

The power ring on my sample is nice and tight and the raised knurls on the ring would make changing power settings easy even with heavy gloves on.

There’s no side-focus on this scope, which isn’t necessary for the shorter-range targets it’s meant for, instead there’s a knob to illuminate the reticle. You can pick from either red or green illumination with 5 levels of intensity for each color.

At first glance, the windage and elevation knobs look large enough to be target turrets but that isn’t the case. Each knob has a false cap on the top to store spare 3V batteries to power the illuminated reticle.

Under each cap is a pop-up 1/4 MOA dial for adjusting zero. One thing I like about the caps is that there’s no chance your zero will wander by accidentally bumping your dials.

The scope feels sturdy enough to drive roofing nails and while I probably won’t push it that far I don’t plan on babying it for one moment because I know that once we get to Gunsite the instructors aren’t going to show any mercy to either us or our gear.