We toss (and kick) a perfectly good precision rifle scope across the range, so that you don't have to 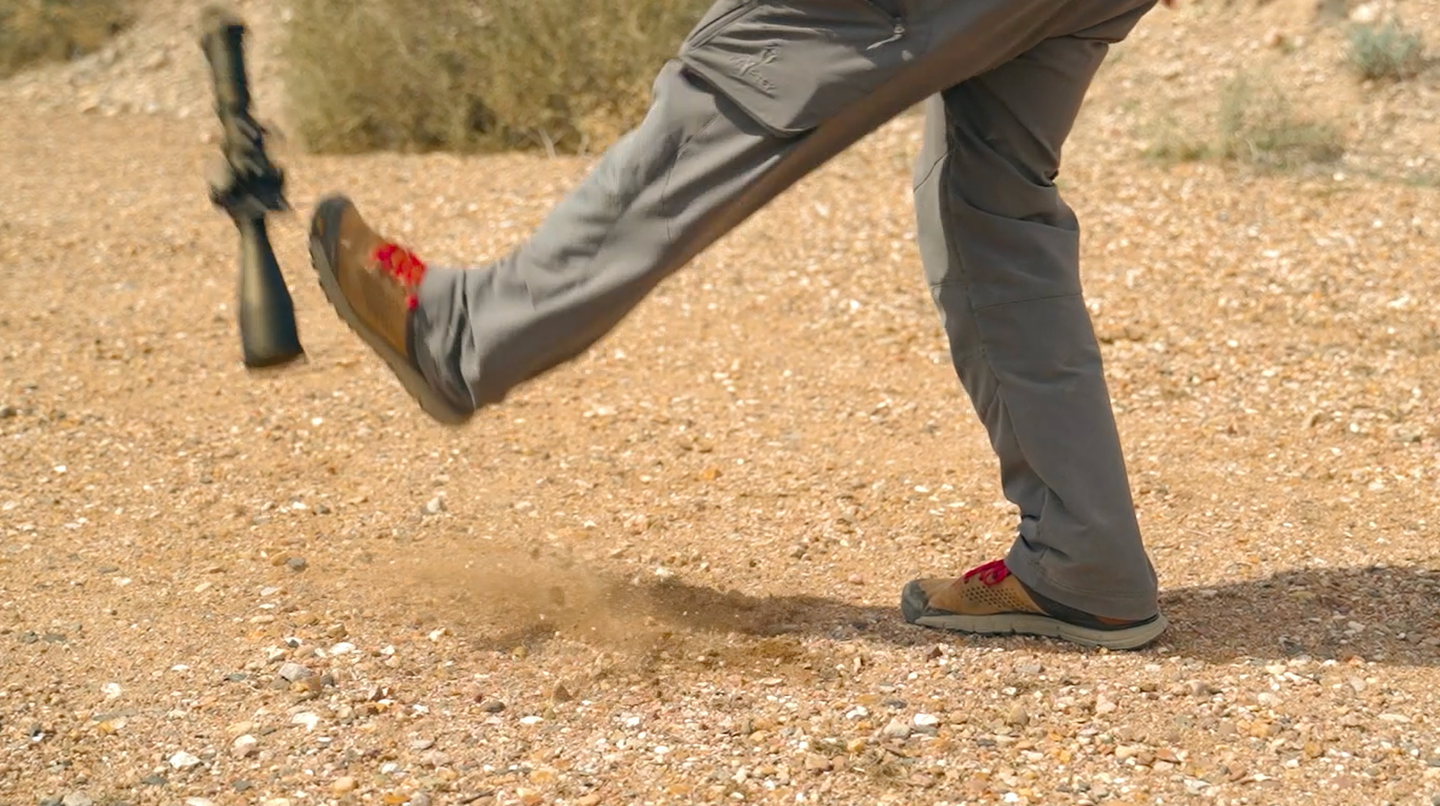 A responsible long-range shooter is supposed to take care of their rifle’s precision scope—a most delicate, vital, and expensive instrument that is the interface between the shooter’s eye and the distant target. I am not one of those responsible shooters. I’ll confess, I treat my gear with an indifference that would give a cold-hearted drill instructor pause.

This explains my preference for battle-hardened equipment. I don’t mind the extra weight of my AI-AXSR, because I know that no matter how many times I bang, kick, or drop it, it will hold zero and retain the ability to make hits on targets at truly silly distances. On top of that AXSR (and on many of my precision rifles) sits a Nightforce optic—the 7-35×56 ATACR, to be exact.

The 7-35 ATACR is expensive (at least $3,000) and heavy, but is as reliable as a waterfowl guide’s veteran Labrador retriever. No matter how much abuse I subject them to, these scopes keep on ticking. But I’ve never gone out of my way to mistreat them, either. Until now.

Years ago, Nightforce released some videos where they would take a scope and throw it around the parking lot of their facility in Idaho and the go shoot it to demonstrate how rugged they were. Back in 2018, they even made a video where they froze one of their scopes in a block of ice, shot it with a shotgun, mounted it on a rifle, and hit a plate at 100 yards. Then they took the scope off the rifle, used it to pound a large spike into a log, remounted the scope, and then blew up a Tannerite target at 100 yards. I love that video. It’s great fun watching people put their money at risk for my entertainment. But my momma didn’t raise no dummies. I’d never do that to my own gear. Or so I thought.

I’ve always wondered if my Nightforce scopes were as tough as advertised, and in a moment of weakness where my curiosity got the better of me, I set out to test the notion. Now, it’s one thing to be able to hit a target at 100 yards, beat up a scope, and hit the target again. It’s another thing to figure out whether the delicate internal components were thrown out of whack, thereby affecting the ability of the scope to maintain long-range accuracy.

The erector system in a scope is what makes the minute adjustments to the position of the reticle when zeroing a scope or dialing it to adjust for elevation or wind. One thing that scope manufacturers struggle with is to make sure that the single-click input into a scope actually moves the reticle that exact amount. It isn’t unusual for there to be a small amount of “drift” with a scope’s adjustments where after dialing 10 or 20 mils, the reticle is off by, in the worst cases, 5 percent or more.

Gunsite Academy, where I did this experiment, has a fixture that immobilizes a scope so that when you dial the turret you can see with a high degree of precision whether a scope is tracking correctly. It’s a heavy steel frame that’s been filled with lead and mounted on a concrete pillar that has a Picatinny rail on top. After mounting the scope on the device, you make some adjustments to get the scope’s crosshairs aligned with a calibrated scale 100 yards downrange.

This is used for Gunsite’s extreme long-range shooting classes, and it lets students know if they need to make any kind of allowance for elevation drift for longer shots. (A 1 to 2 percent drift over 20 mils of travel isn’t uncommon.)

When I put my scope in the fixture, I found that it tracked extremely well. Under the guidance of Cory Trapp, who is Gunsite’s chief long-range shooting instructor, we found that my scope had only about a .06 mil drift at 20 mils, which is as close to perfect as a scope comes. That result didn’t surprise me as the scope has worked well shooting beyond 2,000 yards for me in the past.

But would it perform as well after deliberate abuse? I took the scope out of the fixture, beat it on a gun bench, beat it against a 2×8 forming the frame for a raised shooting position, and before my courage, failed flung it down range where it tumbled and skidded across the unforgiving Arizona hardpan. For good measure, I kicked it as well, sending it pinwheeling across the blue desert sky … and then threw it once more across the rifle range.

I put the scope back in the fixture, where it matched nearly perfectly with its previous alignment. (That’s a testament, among other things, to the ruggedness of the Nightforce Unimount I had the scope secured in.) Note that at 4:38 in the video, I say “the windage has shifted” but that’s simply because the scope wasn’t fully set in the fixture. Once Cory got the the scope aligned correctly, I repeated the tracking test.

To my everlasting relief, my ATACR tracked true. Checking at 5, 10, 15, and 20 mils, the reticle moved to the same spots they did before. I don’t think I’ll ever repeat this test. Once was enough, even for someone who is as hard on their gear as I am. But it did confirm that my confidence in these scopes was not misplaced. I know that when (not if) my rifles are subjected to a brutally hard knock in competition or while hunting that I won’t have to worry. I know that glass can take a beating.