Hunting Gear: How to Get the Most Out of Your Rangefinder

Photo by Rab Cummings I would be willing to bet my last brick of .22LR that most of the hunters... 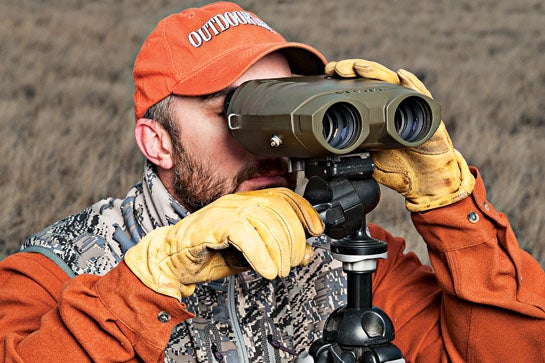 I would be willing to bet my last brick of .22LR that most of the hunters who initially complained about laser rangefinders now tote one in their pack. But their inner workings remain a mystery to most. And a hunter who doesn’t understand what makes a rangefinder tick will not get peak performance from his unit.

Rangefinders emit pulses of laser light, invisible to the naked eye, that reflect off objects downrange. Distance is determined by measuring the time it takes for the reflected photons to return to the unit. To create a rangefinder capable of measuring longer distances, it would be natural to assume you’d just use a more powerful laser. But that isn’t so.

Rangefinders are like stock racecars. Just as engine displacement is limited in NASCAR, the lasers that power rangefinders cannot exceed a certain power threshold in order to remain eye-safe as required by law. Given this firm restriction, we have to look elsewhere to see what differentiates one rangefinder from another.

– Optical Quality: A rangefinder with a small objective lens made of plastic cannot hope to perform as well as a premium rangefinding binocular. Clearer optics with large objective lenses will do a better job transmitting the beam and receiving the reflected photons.

– Software: The secret algorithms employed by manufacturers to run the emitting and sensing diodes are guarded like nuclear launch codes. Better algorithms yield faster and more accurate results and do so under more challenging environmental conditions.

The yardage values used to market rangefinders might make for good advertising, but they are meaningless indicators of real-world performance, as anyone who has attempted to range a target in a snowstorm can attest. Each of the environmental factors below will degrade a rangefinder’s performance.

– Atmospheric Interference: Smoke, snow, haze, rain, fog, smog, and dust. As the laser travels through the air, it will bounce off these elements and scatter, leaving less energy for the unit to detect.

– Background solar radiation: Your rangefinder won’t work as well at high noon in the middle of a desert as it will when the light is lower over your favorite food plot. The radiation floods the sensing diode with light, making the rangefinder’s task more difficult.

– Target reflectivity: The degree to which a target reflects infrared energy–and not visible light, it is worth noting–determines how rangefinder-friendly it is. Ice and snow, for example, are terrible IR reflectors, even though they can blind you with reflected light. (See sidebar for relative reflectivity.)

There are a few steps you can take to improve your rangefinding:

– Steady your rangefinder: Rest the unit on a pack, against a tree, or, best of all, mount it on a tripod.

– Choose light over dark: Generally speaking, lighter areas of a target, such as a light patch of dirt on a hillside, will reflect better than darker areas.

– Trigger control: Put the same care into ranging a target as you would if you were shooting at it. Breath control, a clean press on the “trigger,” and good follow-through are key.