DIY Pronghorns: How to Hunt Antelope Over Water Holes

By far, the most popular bowhunting tactic for pronghorns involves water holes and blinds, and many bowhunters hire outfitters to... 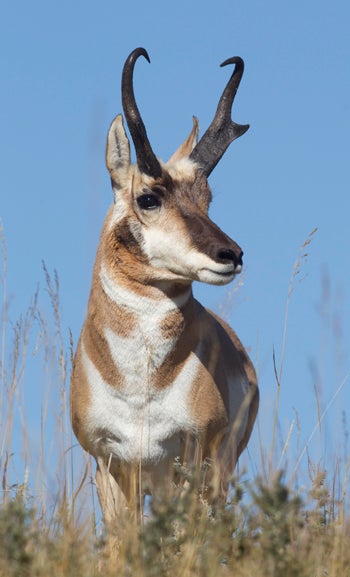 By far, the most popular bowhunting tactic for pronghorns involves water holes and blinds, and many bowhunters hire outfitters to help them find a hot water hole. But you can hunt water-hole antelope on your own–and public BLM, national forest, and state land in Wyoming, Montana, Colorado, New Mexico, and Arizona provide the places to do it. Just ask Bob Bergquist of Rawlins, Wyoming. He’s been at it for 35 years, with 26 Pope and Young antelope and 9 Boone and Crockett bucks to his credit.

1. Scout
“Scouting accounts for 90 percent of my success,” says Bergquist. “My hunting starts in July. I’ll target an area with good bucks, find the animals or the specific buck I want to hunt, then watch where they water.”

2. Set Up
Bergquist sets up a pop-up blind. “You really don’t even have to brush it in,” he says. “If you can, give the antelope time to get used to the blind. Wait at least two days to hunt. You could hunt the first day, but the pronghorns will be real antsy. ” Is wind direction important? “I’ve been using portable blinds on water holes for 10 years,” says Bergquist, “and I have yet to be winded. Scent that escapes the blind is not strong enough to turn antelope away.”

3. Funnel
“You want that antelope watering straight across the water hole from your blind,” says Bergquist. “Funnel or steer them where you want them.

“An old chunk of carpet, an old tire, anything out of the ordinary will make them avoid watering where you can’t shoot.

“Some hunters will hang pie plates from sticks,” he adds. “But you need to put them out ahead of time, because the rattling will spook antelope the first couple days.

“You can also use some fence posts and rope to block off areas where you don’t want antelope drinking,” he says.

**4. Wait **
How long do you wait? “It depends how much you can bear,” says Bergquist. “Get in before first light and stay all day.” Bring a comfortable chair to sit in. Have a couple of gallons of water in a cooler and food. Entertainment is key. “Books, magazines, even a movie loaded on your phone [use headphones],” says Bergquist. “Anything to keep you in the blind.

“Antelope usually come and drink between 10 a.m. and 1 p.m.,” says Bergquist. “The worst thing you can do is get up, go outside, and look around. You need to be ready for the long haul. My buck last year came in 10 minutes before dark on day five.”
**
5. Shoot**
“Don’t shoot when an antelope is coming in,” says Bergquist. “They’re suspicious and on a hair trigger. But don’t wait until they are done drinking, as they will just turn and leave.”

Here’s his plan. “Some bucks will just run in and start drinking,” says Bergquist. “But usually he will drop his head one time, his lips will hit the water, and then he will jerk his head up and look for danger. When he puts his head down a second time, it’s for real. It’s time to draw, aim, and release.”